Assembling the new storage ring for the Advanced Photon Source (APS), a U.S. Department of Energy (DOE) Office of Science user facility at DOE’s Argonne National Laboratory, is like putting a puzzle together.

This particular puzzle includes 1,321 powerful electromagnets, which need to be assembled into 200 modules. The magnets must be put together in a particular order, and their magnetic centers aligned with each other to within a fraction of the width of a human hair. But it’s not just the magnets. Each module requires several other components, including a complex vacuum system.

Supply chain chain issues associated with the COVID-19 pandemic led to delays, but those vacuum systems are starting to arrive at Argonne.

The first vacuum systems have now been tested and installed. This marks another significant milestone in the assembly process: though the APS Upgrade Project has 185 of the 200 required modules partially put together, they now have two that are substantially completed. More importantly, they have a process to install the rest of the vacuum systems quickly.

“It went easier than we anticipated,” said mechanical engineering specialist Jeremy Nudell of the initial installations. “The vacuum system is well designed. Assembly work went quickly and leaks have not been an issue.”

The vacuum systems are a sequence of long, thin tubes. The system must be pumped down to low pressure levels, comparable to those in outer space. Excessive pressures in the system would lead to stray gas molecules knocking electrons off the beam path, which would limit the lifetime of the beam. To prevent this, the system must be kept clean throughout assembly and leak-tight through all connecting vacuum seals. The new storage ring will increase the brightness of the APS x-ray beams by up to 500 times.

The system is challenging to install, since it has a close clearance with the magnets: about half a millimeter, Nudell said. But he praised the team he works with for learning an intricate skill and executing it.

“Technicians come from all different backgrounds, and some of those backgrounds have nothing to do with particle accelerators,” he said. “During training and qualification, these techs have been eager to learn an unconventional discipline, and they’ve picked it up very quickly. This wouldn’t have been possible without the experience and hard work of the techs and engineers.”

Once the modules are completed, they will go into storage in a facility close to the Argonne campus. When the APS Upgrade installation period begins in April 2023, the facility will shut down for a year. During that time, the original storage ring will be removed and the new one installed, piece by piece.  ― Andre Salles

Learn more about the design of the vacuum systems here, and the process of welding them together here. 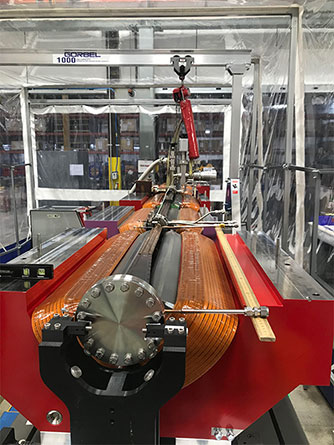 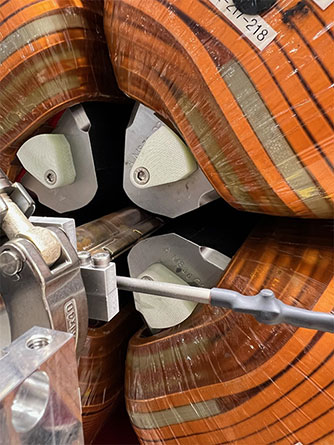 Following the installation of the vacuum system, the top halves of the magnets are reassembled to their bottom halves. The two halves must be lined up to within 10 microns, and since the vacuum chambers are designed to sit extremely close to the magnet poles without touching them, the vacuum system must also be precisely aligned before reassembling the magnets. 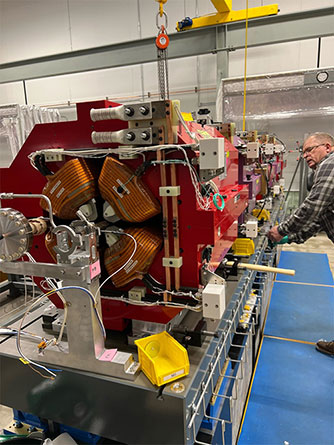 Electromechanical technician Jaroslaw Zygula examines a reassembled magnet with the vacuum system installed. Reassembling the magnets is one of the last major steps before a module goes through the final checks necessary to deem it ready to be installed in the APS storage ring.
Published Date
11.28.2022
11.28.2022