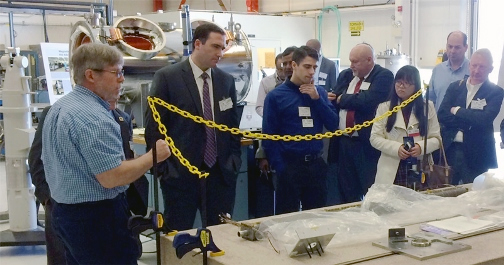 Nearly 100 participants gathered at Fermilab to participate in the Midwest Launch of the Accelerator Stewardship Test Facility Pilot Program.

The launch was part of a national effort by the U.S. Department of Energy (DOE) Office of Science to increase outreach to partners in academia and industry, with the goal of advancing particle accelerator applications in energy and the environment, medicine, national security and discovery science. The event was co-sponsored by Argonne’s Accelerator Institute, led by APS Upgrade Project Director Stuart Henderson.

Participants included State Rep. Mike Fortner (R-West Chicago), who is also an associate professor of physics at Northern Illinois University, and State Rep. Linda Chapa LaVia (D-Aurora), who chairs the House Energy Committee, along with accelerator scientists from Fermilab and Argonne and representatives from private industry and universities.

The group also included representatives from several economic development organizations throughout the area, including World Business Chicago, a public-private partnership between the City of Chicago and its business community.

"We were very encouraged by the response to this event, and we think it indicates real interest in the world-class accelerator development and testing facilities at Argonne and Fermilab."

"We already are hearing from potential partners in industry who want to learn more about our accelerator infrastructure and what it can do. I think this pilot program has the potential to provide American industry with a new suite of incredibly valuable tools to develop new accelerator technologies." 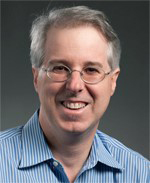 Eric Colby, director of DOE’s Stewardship Program, gave a keynote presentation to the group. He explained that the yearlong Pilot Program is designed to broaden public awareness of the labs’ accelerator R&D capabilities, assess the demand for those capabilities, and provide seed funding for collaborative R&D efforts. The morning plenary session also included a welcome by Andria Winters, assistant director of the Illinois Department of Commerce and Economic Opportunity, who called the DOE National Laboratories “the crown jewels of America’s scientific infrastructure” and stressed the pivotal role of Illinois’ two national labs in supporting the regional innovation ecosystem.

After the plenary session, about 20 participants joined a tour of Argonne’s accelerator facilities, which included stops at the Argonne Wakefield Accelerator, the Superconducting Cavity Surface Processing Facility, and the magnet measurement facility and high power radiofrequency test stands at APS. Afterward, the group returned to Fermilab for a “speed dating” event, to talk with particle accelerator experts from Argonne and Fermilab, learn about the laboratories’ available infrastructure and other facilities, and discuss possible accelerator-related partnerships.

The original Argonne article can be read here.