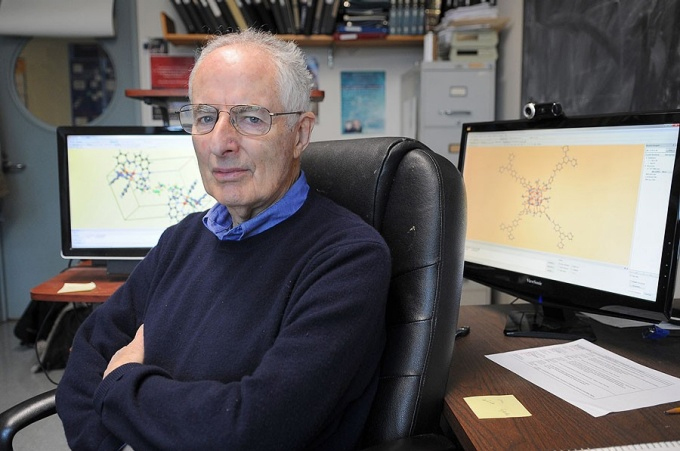 An x-ray crystal structure solved by Philip Coppens has been chosen as one of the world’s top 10 molecular structures ever solved. Coppens is a chemistry professor at the University at Buffalo (New York) and a founding member of ChemMatCARS, which operates an x-ray beamline for the University of Chicago at Sector 15 of the U.S. Department of Energy’s Advanced Photon Source at Argonne National Laboratory.

The list of 10 structures was compiled by Chemical & Engineering News (C&E News), the science and technology magazine of the American Chemical Society, to celebrate the 100th anniversary of x-ray crystallography. The United Nations has designated 2014 as the International Year of Crystallography.

According to the Chemical & Engineering News article, Coppens' solution of the nitroprusside structure (above) “set the stage for using x-ray crystallography to examine dynamics.”

In the August 11 issue of C&E News, the editors wrote that choosing 10 favorite x-ray crystal studies was tough. “That’s no easy task: There are now nearly 1 million to choose from. But we persevered. We zeroed in on a handful that answered pressing chemical questions of their day.”

The editors chose the work of Philip Coppens, SUNY Distinguished Professor in the Department of Chemistry, from the 1990s because it ushered in a new era of x-ray crystallographic research, allowing chemists to study short-lived, excited-state molecules. Until that point, the technique had only allowed scientists to study molecules when they were inactive. Because molecules often pass through excited states just before reacting, they were of special interest to chemists. 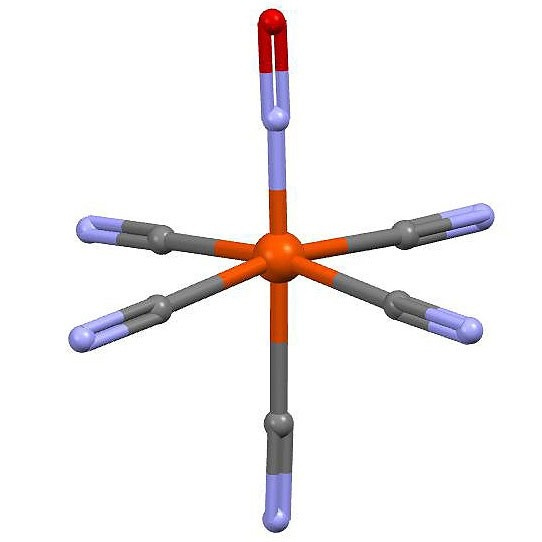 The C&E News article cites, in particular, the relevance of three papers co-authored by Coppens. One (Chem. Commun. 2144-2145 [2004] DOI:10.1039/B409463H) reports results obtained at the ChemMatCARS beamline. Another paper (Acta Cryst. A58, 133-137 [2002], DOI:10.1107/S0108767301017986) is based on research at the U.S. Department of Energy’s National Synchrotron Light Source at Brookhaven National Laboratory. Several other papers based on studies performed initially at the ChemMatCARS beamline and more recently at the University of Chicago’s BioCARS, at Sector 14 of the APS, were published in subsequent years.

A few months ago, Coppens was contacted by a C&E News editor.

“I was called for some information for an issue highlighting a hundred years of crystallography,” says Coppens, “but I was not told in what context. I only found that my structure was in the top 10 when some friends in Europe, who received the issue earlier, wrote to congratulate me.

“What did I think? Well, I knew that we were attempting things that had not been done before and which would be important because the excited states we wanted to probe were structurally unknown and very reactive precursors in chemical reactions,” he recalls. “But I did not expect that we would be quoted on par with the DNA double helix, transfer RNA and other structures of such importance.”

In the early 1990s, Coppens and his UB colleagues completed what was believed to be the first structural study of an excited molecule, providing scientists with a glimpse of the distortions that a molecule undergoes in the milliseconds or nanoseconds before it reacts chemically.

Coppens and colleagues studied sodium nitroprusside, primarily because its presumed electronic excited state lasts for hours, far longer than other molecules, when the crystal is cooled to very low temperatures.

They found that in its excited state, the molecule underwent a number of important structural changes. The 1994 achievement, published in the Journal of the American Chemical Society, was reported as the first x-ray crystallographic solution of a molecule in its excited state.

But as the C&E News article recounts, scientific discovery often takes twists and turns. Coppens and his co-workers subsequently realized what they were studying was not an excited state but rather the result of a reorganization in the molecule, produced by exposure to laser light.

The C&E News article notes that the structure Coppens solved nevertheless “set the stage for using x-ray crystallography to examine dynamics.” As advanced synchrotrons, which generate very bright x-ray beams from extremely fast circulating electrons, have come on line, it has become easier to study the excited state.

“This story reveals something about how science works,” says Coppens, “because we realized that we were on the wrong track for our own project, but we had hit upon a problem of interest by itself.”

Coppens explains that nitroprusside is part of a family of compounds that can release nitric oxide (NO). NO has long been of interest because of its use as a treatment for congestive heart failure. It was, he adds, selected as Molecule of the Year by Science in 1992 because of its action as a chemical messenger in the body, including its ability to regulate blood pressure.

After focusing on properties of nitric oxide and related structures, Coppens returned to the study of excited-state molecules and, by using very intense synchrotron sources, was able to report the first excited state structure at atomic resolution in 2002, followed by a second one, whose excited state lasts only 11.7 microseconds.

“This work continues today,” says Coppens. “We just submitted a report on a new study of a very short-lived complex containing silver and copper atoms.”

ChemMatCARS Sector 15 is principally supported by the Divisions of Chemistry (CHE) and Materials Research (DMR), National Science Foundation, under grant number NSF/CHE-1346572. BioCARS is supported by the National Institute of General Medical Sciences of the National Institutes of Health under grant number R24GM111072. This research used resources of the Advanced Photon Source, a U.S. Department of Energy (DOE) Office of Science User Facility operated for the DOE Office of Science by Argonne National Laboratory under Contract No. DE-AC02-06CH11357.