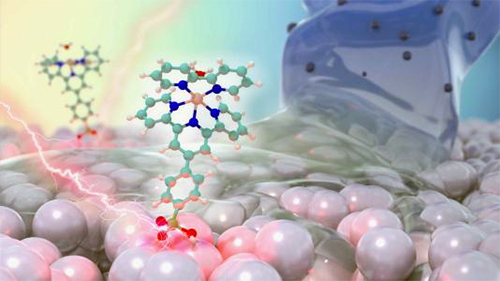 The original Argonne feature by Joseph E. Harmon can be read here.

Water-energy systems are at the heart of electricity production, water treatment and distribution, irrigation of energy crops such as maize, oil and gas operations and more. One of the biggest impediments to improving such systems is the complicated science at the interface between water and solid surfaces in these systems.

For the past four years, the Advanced Materials for Energy-Water Systems (AMEWS) Center, led by the U.S. Department of Energy’s (DOE) Argonne National Laboratory, has been making pivotal discoveries centered on this important interface.

Today, DOE announced its decision to renew AMEWS for another four years. For the renewal period, Argonne will continue its earlier partnership with the University of Chicago and Northwestern University and will add a valuable new partner, Princeton University. Planned funding is $13 million over the next four years.

Established in 2018, AMEWS is one of DOE’s Energy Frontier Research Centers (EFRCs). The EFRCs bring together leading researchers from national laboratories and universities to tackle the many big challenges our nation faces in energy and related areas.

“With this renewal, AMEWS will continue unravelling the mysteries behind the fundamental chemical and physical interactions at the water-solid interface,” said AMEWS director Seth Darling. ​“Our discoveries will inspire game-changing technologies to address water crises brought on by increasing population, accelerating development and climate disruption.”

In addition to serving as AMEWS director, Darling is the interim associate laboratory director for the Advanced Energy Technologies directorate at Argonne.

One of the numerous highlights from AMEWS’s first four years is the pioneering of a new route for fabricating electrically conductive membranes with precise pore structure. The route involved applying a method invented at Argonne, sequential infiltration synthesis. Research on these membranes will continue in the next four years as AMEWS scientists look to attach a catalyst to the electrified membrane. This catalyst-coated membrane will be able to degrade water contaminants that pose a risk to public health.

One key example of such a water contaminant is per- and polyfluoroalkyl substances (PFAS). These extremely stable pollutants are produced in many industrial processes and are present in numerous consumer products.

Another highlight is use of molecules with ​“reporter bonds.”  When these molecules are tethered to solid surfaces, the vibrations of the reporter bonds can be probed with advanced characterization tools. The findings report on what is happening in the nearby environment, giving critical insight into the water-solid interface.

“In this effort, we will be drawing on our newly developed ability to attach these molecules to surfaces in a very precise way and measure their vibrations in water with various advanced methods,” Darling said. ​“We can then interpret those complex measurements with our modeling tools using high performance computing.” This new approach will greatly benefit the next four years of groundbreaking AMEWS research related to treating challenging contaminants in water.

Importantly, AMEWS’s initial four years has led to a vast library of knowledge about the fundamental interactions at the water-solid interface. It also yielded new tools for conducting such research.

“In the next four years, we will advance this knowledge by exploiting our new capabilities and tools,” said Chong Liu, leader of one of the two AMEWS scientific thrusts and assistant professor at the University of Chicago. ​“Of particular interest here is probing the adsorption and transport of nanoparticles and molecules within very confined spaces at the interface.”

“We will also be studying the reactivity of these confined molecules, especially as it applies to converting pharmaceuticals and other contaminants in water to something benign,” said Karen Mulfort, leader of the second thrust and a chemist at Argonne.

Central to the execution of AMEWS science has been and will continue to be three of Argonne’s DOE Office of Science user facilities, specifically, the Advanced Photon Source, Center for Nanoscale Materials and Argonne Leadership Computing Facility.

Planned AMEWS experiments could be among the first to leverage the new capabilities available when the upgrade of the Advanced Photon Source comes online in 2024. The upgrade will allow AMEWS scientists to probe the water-solid interface at spatial and time resolutions and under conditions that had been inaccessible before.

“We have also added to the AMEWS staff several world-class scientists to better advance our two thrusts,” Darling said. ​“I fully expect the next four years to outshine the amazing accomplishments of the first four.”

Funding for AMEWS comes from the DOE Office of Basic Energy Sciences.

The Center for Nanoscale Materials is one of the five DOE Nanoscale Science Research Centers, premier national user facilities for interdisciplinary research at the nanoscale supported by the DOE Office of Science. Together the NSRCs comprise a suite of complementary facilities that provide researchers with state-of-the-art capabilities to fabricate, process, characterize and model nanoscale materials, and constitute the largest infrastructure investment of the National Nanotechnology Initiative. The NSRCs are located at DOE’s Argonne, Brookhaven, Lawrence Berkeley, Oak Ridge, Sandia and Los Alamos National Laboratories. For more information about the DOE NSRCs, please visit https://​sci​ence​.osti​.gov/​U​s​e​r​-​F​a​c​i​l​i​t​i​e​s​/​U​s​e​r​-​F​a​c​i​l​i​t​i​e​s​-​a​t​-​a​-​G​lance.

The Argonne Leadership Computing Facility provides supercomputing capabilities to the scientific and engineering community to advance fundamental discovery and understanding in a broad range of disciplines. Supported by the U.S. Department of Energy’s (DOE’s) Office of Science, Advanced Scientific Computing Research (ASCR) program, the ALCF is one of two DOE Leadership Computing Facilities in the nation dedicated to open science.