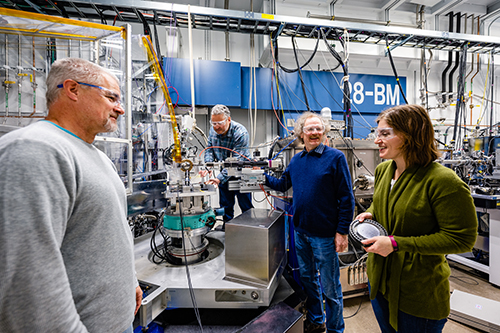 The enhancement was very timely. The former two-decades-old instrument was not precise enough to fully capitalize on anticipated post-upgrade source improvements, such as measuring smaller samples and very thin films. It also lacked the flexibility to satisfy the growing trend of more diverse and extreme sample environments.

The spectrometer was re-designed, decoupling the motions of sample and analyzer and removing functions that have since become dispensable. The new spectrometer is consequently simpler mechanically, faster, more accurate and easier to operate than its predecessor. It also has more space to accommodate a wide variety of sample environments for in situ/operando measurements.

“The upgraded configuration makes the RIXS instrument an ideal place to perform experiments that require more complex scattering geometries and high accuracy," said Wei-Sheng Lee of Stanford University, who was one of the first users of the new instrument. Lee and his group performed RIXS measurements with both the old and upgraded instrument using grazing incidence RIXS on NdNiO2 films with thickness of only a few nanometers. This required high degrees of reproducibility and stability from the instrument, providing a stringent test for the new setup.

These improvements to the RIXS spectrometer were conceived of and implemented by physicists and staff scientists of the Inelastic X-ray and Nuclear Resonant Scattering (IXN) group in Argonne’s X-ray Sciences Division (XSD): Diego Casa, Jungho Kim, Thomas Gog, Ayman Said, Thomas Toellner, and Mary Upton. Critical engineering support was rendered by Scott Coburn of Brookhaven National Laboratory. The pandemic hit just as the implementation phase was getting started, but the team quickly adapted to virtual meetings and other remote work tools to plan and coordinate installation of new components within COVID safety protocols.

RIXS is ideal for studying electronic excitations in a wide range of complex materials, which give rise to exotic phenomena expected to power advanced devices and shape the next generation of technological innovations. Scientists have designed this spectrometer to reach unprecedented count rates and energy resolution that will continue to advance discoveries in materials science and the future of quantum computing.

In the more distant post-upgrade future, the newly enhanced RIXS instrument will accommodate next-generation, quartz-based, curved crystal optics, as well as ultra-high resolution flat-crystal assemblies that were recently developed and tested by the IXN group. With these novel optics, the IXN group currently holds the world record in energy resolution of any RIXS measurement ever performed.

The first functioning enhanced beamline funded by the APS Upgrade project is the result of hard work, creativity, expertise and dedication by many. Scientific Associates Rick Krakora and Emily Aran, collaborators within the IXN group, contributed significantly. The RIXS enhancement benefitted further from contributions of Xianrong Huang, Jeff Kirchman and Sunil Bean of APS.

“We are excited to bring this new generation of RIXS instrumentation to our user community, and they are also excited in anticipation of new science,” said Gog, physicist and group leader with XSD.  ― Kristen Mally Dean