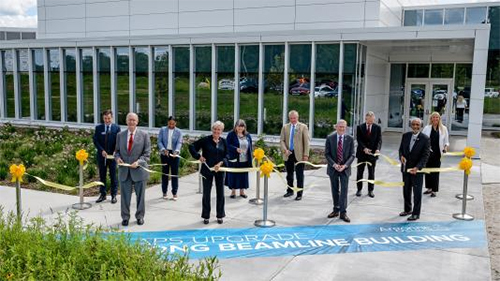 Earlier today, U.S. Secretary of Energy Jennifer Granholm and several Illinois leaders cut a ceremonial ribbon to mark the completion of a new facility that will host new experiments that will contribute to the future of electric vehicles, quantum computers and resilient materials for all kinds of uses.

The newly constructed Long Beamline Building (LBB) at the U.S. Department of Energy’s (DOE) Argonne National Laboratory is an experiment hall that will become a part of the Advanced Photon Source (APS), a DOE Office of Science user facility. It will house two new beamlines that will transport ultrabright x-rays from the heart of the APS to cutting-edge scientific instruments.

This next generation of beamlines will be capable of providing high-resolution x-ray images of critical components and technologies from aircraft engines to solar cells to advanced materials for microelectronics, in clear detail and at impressively small scale.

The LBB is part of an $815 million upgrade of the APS, one of the most productive x-ray light sources in the world. More than 5,000 scientists from around the globe use the APS in a typical year to conduct research in fields ranging from chemistry to life sciences to materials science to geology.

“When America leads on science, we boost our global competitiveness and we create jobs. President Biden believes that investing in science and innovation helps us tackle not only today’s greatest challenges, but tomorrow’s as well,” said Secretary Granholm. ​“The newly unveiled facility at Argonne National Lab’s Advanced Photon Source is exactly what scientific leadership looks like and DOE could not be more proud of the scientists, researchers, staff and students who lead this important work.”

“As a particle physicist and a businessman, I am proud that this groundbreaking investment is happening here in Illinois at Argonne, our country’s first national laboratory,” said Congressman Foster. ​“The research that will be conducted here will be crucial as we work to develop everything from new energy technologies to solutions to pressing challenges like the opioid epidemic. This is just the beginning. I will continue to push for the sustained federal funding that will unlock the immense potential of the APS and Argonne’s other world-class research facilities.”

The APS Upgrade will replace the facility’s 25-year-old electron storage ring, an extremely large and powerful scientific instrument, with a state-of-the-art ring that will increase the brightness of the x-rays generated by up to 500 times. Several new beamlines will be constructed around the existing storage ring to facilitate a variety of research aims. The LBB will host two of them:

The Long Beamline Building project also includes the construction of the Activated Materials Laboratory (AML), funded by DOE’s Office of Nuclear Energy. Adjacent to HEXM, the AML will allow the safe handling and storage of radioactive materials.

“It is imperative that scientists have the facilities and instruments they need to help us address climate change and answer the energy challenges that lie ahead,” said Congressman Rush. ​“With ingenuity and tenacity, a diverse set of engineers and scientists here in Illinois have taken an important step to providing a world-class resource that will improve the future of every American, wherever they live. I applaud their progress.”

As the name implies, the beamlines housed in the LBB are unusually long. In fact, they’re about three times longer than those currently at the APS, sending photons further from the source to reach samples being analyzed. This distance (roughly two football fields in length) allows for more focused x-ray beams and helps scientists look at materials and processes in much greater detail.

“The upgraded APS, paired with our advanced supercomputers, will offer scientists a powerful combination of tools to explore science at scale,” said Kearns. ​“We are thrilled to see the Long Beamline Building completed, which will help us push the boundaries of science and accelerate the technology that drives U.S. economic prosperity and security.”

The APS Upgrade team received full occupancy of the LBB in June 2022 — on time and on budget. Work is now underway to build experiment stations for the new beamlines inside the building.

The LBB, which broke ground for construction in June 2020, remains the most outwardly visible portion of the APS Upgrade project. To allow installation and commissioning of various components essential to the upgrade, the APS will pause operations for one year, starting in April 2023. When the light source returns in 2024 and experiments resume, the long beamlines in the LBB will be put to use immediately.

“The upgraded APS represents some of the most forward advances in x-ray science design and technology. Past research at the APS has directly contributed to two Nobel prizes, has been critical to basic research expanding human knowledge, as well as contributing directly to solving the most pressing national challenges. Without exaggeration, we anticipate research here that will underpin breakthroughs in a wide range of research from energy storage, transportation, materials science and life sciences including playing a central role in future pandemic preparation.”

“The completion of the Long Beamline Building is an exciting and important step in Argonne’s upgrade of one of the most productive light sources in the world. This is a wonderful achievement for the APS Upgrade team, and we are all looking forward to delivering a world-class facility for the scientific community.”

“The Long Beamline Building is a significant part of the APS Upgrade project. Getting the LBB to the point where we have occupancy and we are working on the beamlines inside has been an enormous effort by the entire team, and we’re proud and happy to celebrate that today.”

The original Argonne press release by Kristen Mally Dean can be read here.

APS in the News: "A small gift to the planet': U.S. Energy Secretary discusses the future of energy at Argonne," Daily Herald, 7/26/2022 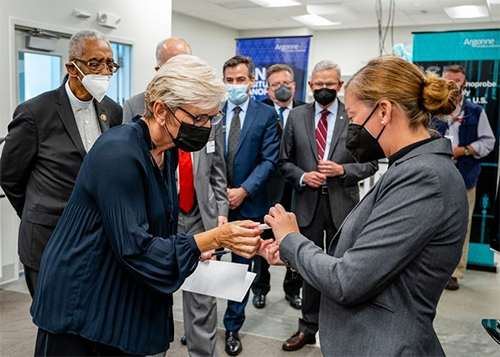