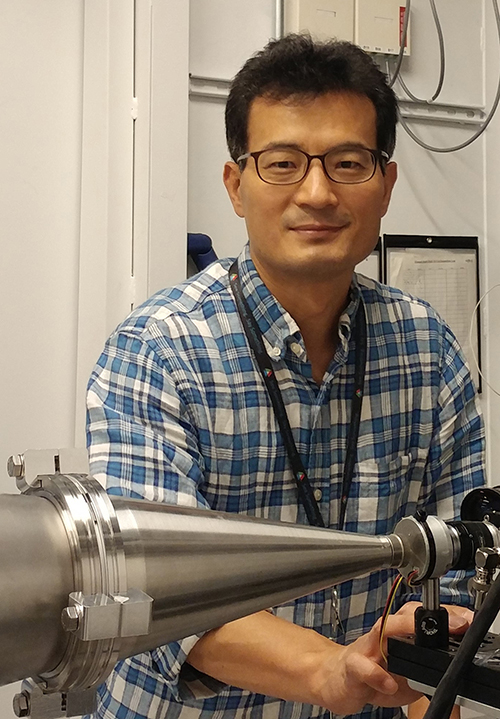 Sungsik Lee of the U.S. Department of Energy’s Advanced Photon Source (APS), and colleagues from University College London, the University of Cambridge, Tufts University, and the University of California, Santa Barbara, have been awarded the 2022 Faraday Division Horizon Prize by the Royal Society of Chemistry (RSC) for the development of single-atom alloys, a new class of catalysts that play a prominent role in the energy and sustainability fields.

Lee is a physicist with the X-ray Science Division Chemical & Materials Science Group at the Argonne National Laboratory APS.

According to the RSC, Chemistry is fundamentally about transforming one molecule into another, often with the aid of catalysts. Almost all large-scale industrial chemical processes that produce the chemicals needed for the 21st century use heterogeneous catalysts developed largely by trial-and-error experimentation during the 20th century. Many of these processes are energy-inefficient and entail enormous carbon footprints, so catalysts with superior performance are urgently needed for a more sustainable future.

Single-atom alloys (SAAs) developed by the team are novel catalysts that utilize precious metals at the ultimate limit of atom efficiency and provide great opportunities for greener, cheaper and more efficient chemical processes.

Guided by physical insights obtained by theory, as well as simulations on supercomputers, they have demonstrated the design of SAA catalysts that promote process efficiency and low energy utilization, reduce waste or by-products and exhibit longer catalyst lifetimes than "traditional" catalysts, for favorable chemical process economics.

SAAs are thus envisioned to be the catalysts of the future for various applications, including energy storage and clean air technologies as well as renewable fuels and chemicals manufacturing.

The Horizon Prizes highlight the most exciting, contemporary chemical science at the cutting edge of research and innovation. These prizes are for teams or collaborations who are opening new directions and possibilities in their field, through ground-breaking scientific developments.

“This award to Sungsik and his collaborators not only recognizes the importance of their groundbreaking work on single atom,” said Jonathan Lang, XSD director, “but also the value and strength that derives from multinational and multi-institution cooperative research.”