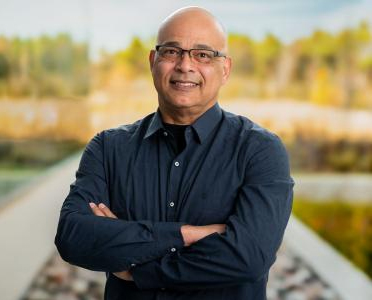 Fernando Rafael loves the dynamic nature of his job and his role in building something extraordinary.

“Every day brings something new,” Rafael said with an easygoing smile from his office at the U.S. Department of Energy’s (DOE) Argonne National Laboratory. Rafael is the engineer overseeing the new power supply and electrical systems for a massive upgrade of the Advanced Photon Source (APS), a DOE Office of Science user facility at Argonne.

There are thousands of electronic components involved in the APS Upgrade Project, and their reliability is crucial. Combined, they support an enormous power system with an electrical current that must match the stability requirements of the upgraded APS’s magnetic fields, which are generated by the current from the power supplies.

The upgraded APS’s magnetic field will be generated by 1,321 powerful electromagnets. They will keep a beam of electrons orbiting around a storage ring that spans roughly two-thirds of a mile. Those electrons will be used to create ultrabright x-ray beams – up to 500 times brighter than the ones the current APS can generate – for research.  Instability in the magnetic field, will result in an unstable beam, which means blurry, low-resolution x-ray images.

This is where Rafael comes in. To date, he has received from vendors more than 3,000 power converters for installation in the new storage ring, ranging from hundreds of watts to 750,000 watts. (In comparison, a light bulb in a household lamp might require 60 watts.) He has also received hundreds of precision direct-current measurement systems, digital controller interfaces and relay racks.

The requirements for the upgraded APS push the electronic components’ performance to their limits. For this reason, another significant part of Rafael’s role involves testing.

In addition to collaborating with vendors during the design phase, Rafael works with them to do comprehensive testing to ensure the prototypes meet the APS’s demanding specifications. He also conducts tests to ensure that none – or only a small number – of the components will potentially fail.

“When you manufacture a single electronic device, you usually calculate the life expectancy and buy a spare just in case it fails,” said Rafael. “Most electronic components’ failures are due to material defects, design error or errors during assembly. Failures typically happen either in the first few hours or in the end of the components’ lifetimes, so we stress and test the components in a variety of ways to address early failure.”

Additionally, he works with the beam diagnostics group responsible for monitoring both the electron beam quality and the photon beam quality in the accelerator. He helps them with the instrumentation diagnostic equipment used to measure the energy of the electron beam, as well as how much the beam varies in position as it orbits around the storage ring. Even the slightest change in direction as it travels can affect the spatial resolution that can be achieved in X-ray experiments. Measurement data are reviewed and corrections are made as needed.

Despite the significant gain in brightness, the machine will require less energy to operate, thanks to improvements in technology and materials.

Rafael’s seemingly unflappable attitude toward overseeing the controls, diagnostics, and overall power supply for the APS Upgrade project is likely born of nearly 30 years’ experience working on accelerators. This is his third major effort on an accelerator project.

Rafael is an electrical engineering graduate of Instituto Nacional de Telecomunicacoes (INATEL), and he holds a master’s degree in power conversion from State University of Sao Paulo in Campinas (UNICAMP). Shortly after finishing his undergraduate work, he joined a small group of engineers and scientists to build the Brazilian Synchrotron Light Source, UVX.

While working on that project, his manager gave him a two-volume book about the history of DOE’s Stanford Linear Accelerator Center (SLAC). He was mesmerized and began dreaming of at least visiting there someday.

Ten years later, in 1990, his dream came true. Not only did he visit SLAC, but he accepted a job there working on the Stanford Positron Electron Asymmetric Ring (SPEAR3) accelerator project, which ultimately produced x-rays for the Stanford Synchrotron Radiation Lightsource (SSRL), a DOE Office of Science user facility. By the time Rafael left California in 2018 to join Argonne and the APS Upgrade team, he had risen to the role of division director for electronics at SSRL.

Today, as he works with the Argonne team on the APS Upgrade Project, he already daydreams about what the next cutting-edge accelerator project will be.

“When we finish, we will be at the top of the technology for this machine which will be best in class for many decades to come, but we will be thinking right away about ways to improve even further,” he said. “As soon as it is complete, we will see a new challenge. Will we do something else to increase the machine’s performance?”

Until that question is answered, Rafael keeps working and enjoying his new lifestyle in the Midwest, which he says is very relaxing and peaceful. He joined the estimated 23 million American households who adopted a pet during the pandemic and he often spends his free time with his young German Shepherd, Kona. He plays high-level indoor volleyball and takes one or two international travel trips per year with his grown daughter. They like to visit the beautiful coastline of Brazil, but they also appreciate coming home to Illinois.

“I can’t describe how much I like to be with the people with whom I live and work here,” he said of Argonne. “I bought a house and within the first week, both my neighbors knocked at my door with candies and welcomed me. Some people might think this is too much and want more privacy, but I love it!”

The original Argonne feature by Kristen Mally Dean can be read here.