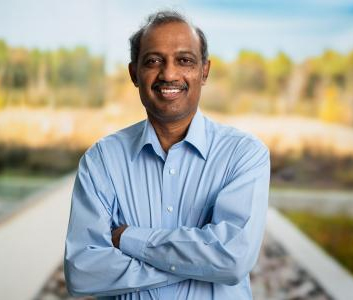 Physicist Suresh Narayanan is the 2022 recipient of the Gopal K. Shenoy Excellence in Beamline Science Award. He is the group leader of the X-ray Science Division (XSD) Dynamics & Structure Group at the U.S. Department of Energy’s (DOE) Advanced Photon Source (APS) at Argonne National Laboratory.

This annual award recognizes active beamline scientists at the Advanced Photon Source, a DOE Office of Science user facility, for significant contributions to research or instrumentation and support of the beamline user community. The APS Users Organization, which grants the award, renamed it in 2017 in honor of the late Gopal K. Shenoy. Shenoy was an outstanding materials scientist closely involved in the inception of the APS as well as an enthusiastic supporter of scientists who carried out research there.

A keen, organized presence at APS beamline 8-ID since 2003, Narayanan has been dedicated to improving and supporting research using coherent small-angle x-ray scattering measurements and x-ray photon correlation spectroscopy (XPCS). The XPCS beamline is used to conduct fundamental research of soft condensed matter problems. For example, scientists can study improving mechanical strength of polymer nanocomposites, phase separation in chemical and biological materials, and nanoscale flow in complex fluids. The research can be applied to energy efficient tires, insight into cartilage mechanics and better understanding of the effect of aging on eye lenses and cataract formation.

Narayanan has played a key role in making beamline 8-ID-I ​“the premier XPCS beamline in the world,” according to those who nominated Narayanan for this year’s award.

“I feel honored to be chosen for the prestigious Gopal K. Shenoy award,” said Narayanan. ​“The award is a dream for beamline scientists. It is also a recognition for all the XPCS team members. It has been a collective group effort to keep the technique and the beamline successful.”

In addition to early efforts that increased beamline stability and coherence, and improved optical contrast through design modifications, Narayanan proved adept at finding ways to improve data analysis of measurements taken at the beamline. He worked with colleagues to better incorporate high performance computing tools into research at the beamline and significantly cut the amount of time required to produce correlation functions. The resulting data reduction system provides near real-time measurement data analysis and is so effective that most researchers at the beamline use it.

Those who nominated Narayanan commended him for his extensive support of users before, during and after their time at the beamline.

“Via his interaction with young users, Dr. Narayanan is really a teacher of the new generation of XPCS scientists, thereby strongly promoting the user community,” wrote one group of beamline users in their nomination form. They went on to praise the ​“great work atmosphere” and ​“pleasant personal experience” so often associated with research conducted at beamline 8-ID.

Narayanan has also made outstanding scientific contributions himself. He has published 153 papers in the fields of physics, physical chemistry, and synchrotron science. His impact is especially prevalent in studies of the kinetics and dynamics of soft condensed matter systems, which include complex fluids, polymers, organic-inorganic hybrid materials, and polymer thin films.

In addition to his role as group leader, Narayanan is lead scientist for operations at 8-ID and lead scientist for the APS Upgrade Project XPCS feature beamline, managing the design and development of the beamline as well as the coherent surface scattering imaging beamline. He earned his Ph.D. in physics from the Inter University Consortium for Scientific Research in 2000 and completed a postdoctoral fellowship at Argonne in 2003.

The original Argonne feature by Kristen Malley Dean can be read here.