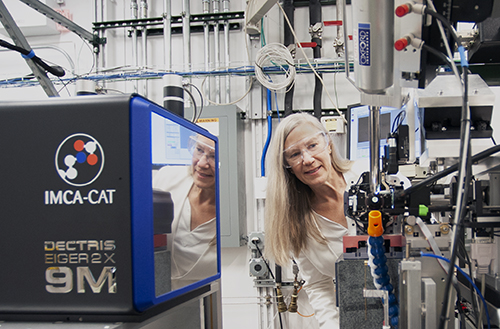 The original Argonne feature story can be read here.

Advanced Photon Source (APS), a U.S. Department of Energy (DOE) Office of Science user facility at DOE’s Argonne National Laboratory, produces ultrabright, high-energy x-ray beams. Thousands of scientists from around the world use the APS to conduct groundbreaking research that improves everyday life as we know it. Skeptical? Read on.

In December 2021, the U.S. Food and Drug Administration issued emergency use authorization for Paxlovid, the first oral antiviral approved for the treatment of mild-to-moderate coronavirus disease in adults and children 12 years of age and older who are at high risk for progression to severe COVID-19. Paxlovid was created by scientists at the pharmaceutical company Pfizer with the help of the ultrabright x-ray beams of the APS.

Work to determine the structure of Paxlovid was done at the Industrial Macromolecular Crystallography Association Collaborative Access Team (IMCA-CAT) beamline at the APS, operated by the Hauptman-Woodward Medical Research Institute on behalf of a collaboration of pharmaceutical companies, of which Pfizer is a member.

IMCA-CAT uses the x-ray beams of the APS to probe the atomic structures of proteins, like those that make up SARS-CoV-2, the virus that causes COVID-19. Scientists use this information to see how potential drug compounds may interact with the virus. This lays the groundwork for the creation of new vaccines and potentially effective treatments, such as Paxlovid. 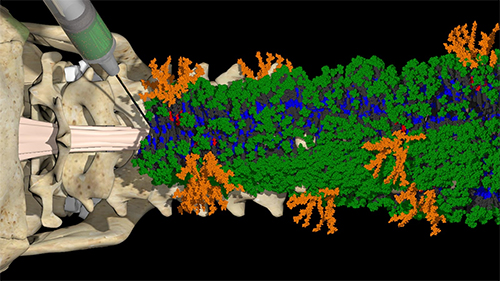 An injection that uses ​“dancing molecules” to repair spinal tissue and reverse paralysis offers hope to thousands of people who are paralyzed with severe spinal cord injuries every year. The treatment, which was developed with the help of research using the Dow Northwestern DuPont Collaborative Access Team (DND-CAT) beamline at the APS, run by Northwestern University’s Synchrotron Research Center, was shown to work in mice. Paralyzed mice regained their ability to walk four weeks after an injection of the new treatment.

Injected as a liquid, the molecules came together in a solution to form tiny fiber structures (called nanofibers) that surrounded the spinal cord. The researchers discovered that the motion of molecules within the nanofibers could be controlled by changing their chemical structure. The molecules that moved most — ​“danced” more — were more likely to signal cells via proteins called receptors, resulting in a more effective treatment. Knowing the structure of the molecular matrix allowed researchers to tune the motion of the molecules. By making the molecules ​“dance,” they were more likely to find and engage cellular receptors, triggering the cells to repair damaged neurons.

Current lithium-ion batteries run into three main challenges with fast charging. They can crack under the stress, generate too much heat too quickly (which slashes their lifetimes) and pose safety hazards if the charged molecules within the battery get out of balance with one another.

Scientists from Argonne use the intense x-ray beams at the APS to detect these obstacles. At beamline 11-ID-B, one of many experiment stations at the APS, researchers have watched a series of battery cells charge under varying conditions. The high energy of the x-ray beam allows researchers to penetrate the whole battery, while the high beam intensity at the APS reduces measurement time from days to minutes. This makes it possible to track uneven battery performance related to fast charging, even at the atomic level. The research will help scientists develop better, fast-charging battery technologies.

Hydrogen-fueled vehicles could be an important step toward a cleaner planet. They emit no chemicals other than water vapor, and may help reduce harmful carbon dioxide and air pollution levels. But while hydrogen is one of the most abundant elements on the planet, it has been costly to isolate without relying heavily on fossil fuels.

A team of researchers led by Oregon State University used beamlines 9-BM and 4-ID-C at the APS to test ways scientists can use catalysts to improve efficiency of hydrogen production process using cleaner, greener energy. Catalysts are substances that increase the rate of a chemical reaction without undergoing any permanent chemical change. The new catalysts were 150 times as efficient as the original structures they were adapted from, and close to three orders of magnitude better than the common commercial catalyst, iridium oxide. This significantly reduces the cost of producing hydrogen, which means it is closer to it realizing its potential as an abundant, affordable and reliable clean energy solution. 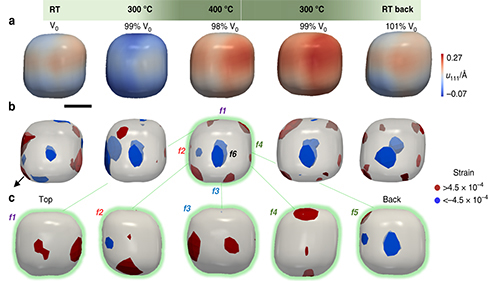 Scientists are working to reduce damaging carbon monoxide emissions by learning about the chemical reactions that occur inside the exhaust systems of fuel-burning vehicles. Those reactions often use gold as a catalyst. While large amounts of gold are inert, tiny particles of it are an active catalyst in the oxidization of carbon monoxide, a reaction that changes it into carbon dioxide. Understanding how this catalysis works is the first step to optimizing, improving and ultimately controlling or limiting carbon monoxide emissions.

A research team led by scientists from the Brazilian Synchrotron Light Laboratory (LNLS) brought synthetic gold particles with imposed chemical defects to study at beamline 34-ID-C at the APS. The beamline specializes in taking pictures of samples as they undergo reactions — changes in temperature, for instance, or increased pressure — in real time. In this case, the gold nanoparticles were used to oxidize carbon monoxide and the scientists captured changes in the crystalline framework of the particles as the reaction was happening. The result? A new understanding of the way these nanoparticles experience catalytic reactions.

Researchers at the University of Chicago and Argonne used advanced x-ray microscopy techniques at the APS to image an entire mouse brain across five orders of magnitude of resolution. Researchers say this step will bridge the gap between MRI and electron microscopy imaging and uncover new details about the structure of the brain.

The APS uses a type of imaging called synchrotron-based x-ray tomography, which can be likened to a ​“micro-CT,” or micro-computerized tomography scan. Thanks to the powerful x-ray beams produced by the APS at Argonne, the researchers were able to image the entire mouse brain — roughly one cubic centimeter — at the resolution of a micron, 1/10,000 of a centimeter in roughly six hours.

The ​“micro-CT” technique provides a clear way to identify changes in the microstructure of the brain when there is a disease or injury present. Researchers are already using this technique to begin exploring important questions in neuroscience. Scientists are looking at the brains of mice that have been genetically engineered to develop Alzheimer’s disease to see if they can trace abnormalities seen with x-rays back to measurable changes in MRI scans, especially in early stages of the disease.