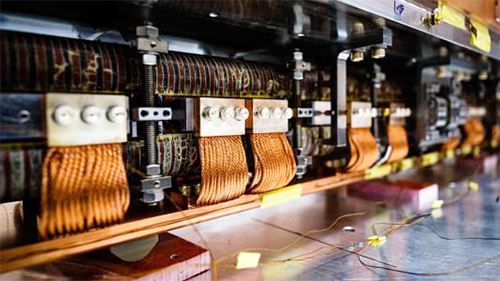 In the late fall of 2021, two separate teams of engineers put the fruits of years of labor through their paces in two different buildings at the U.S. Department of Energy’s (DOE) Argonne National Laboratory.

Though they were built to perform very different tasks, these two components have a lot in common. They’re both superconducting devices, meaning they can generate higher magnetic fields more efficiently than traditional devices. They’re both brand new technology, designed for the in-progress upgrade of the Advanced Photon Source (APS), a DOE Office of Science user facility at Argonne. And they both operate at temperatures well below freezing – at or below 4 Kelvin (roughly -450 degrees Fahrenheit).

And both of these new components were successfully lowered to their operating temperatures recently, passing their first cold tests with flying colors.

These first tests were a major milestone for the APS Upgrade Project, which will see the current electron storage ring at the heart of the APS replaced with a state-of-the-art magnet system. The upgraded APS will deliver x-rays that are up to 500 times brighter than those currently generated, and offer scientists new tools for using those x-rays to create stronger materials, longer-lasting batteries and more effective vaccines, to name a few.

Argonne has long been a world leader in superconducting magnet technology, specifically in the design and construction of magnets called superconducting undulators (SCUs). Light sources like the APS generate beams of photons (particles of light) by siphoning off the energy given off by electrons as they circulate inside a storage ring, passing through magnetic fields. The undulator magnets are special devices that efficiently convert that energy to light, and the higher a magnetic field that can be generated with them, the more photons can be created. The undulators are electromagnets, which create strong magnetic fields by passing current through loops of wire.

There are three SCUs currently in use in the APS. Now the same team that has been designing, building and testing SCUs for 10 years is working on new magnet devices for the APS Upgrade Project. These new devices each contain two SCUs, which are twice as long as the original magnets. Four of these devices are slated to be installed in the upgraded APS, and one of the tricky things about them is that different parts of the devices will operate at different temperatures. While the magnets within the cryostat (which maintains the cryogenic temperature) must be 4 Kelvin (about -450 degrees Fahrenheit), the beam chamber must be 20 Kelvin (around -420 degrees), while the thermal shield – the metallic shell that encompasses everything – has to remain around 45 Kelvin (about -380 degrees).

“We have been building up to cool-down for a few years,” said Argonne engineer Matt Kasa. “It was a feeling of uncertainty along with excitement. But the temperatures reached what we expected, and we learned a lot. We were able to make sure we could energize the magnet inside the cryostat, which was a huge milestone for the team.”

Just assembling the SCU for its cold test was its own endeavor. The magnets themselves are hand-wound and extremely precise – nearly two miles of niobium-titanium-based superconducting wire is used for each one, and the space between each wind of the wire determines the strength of the magnetic field. The magnets are connected to a complicated assembly, referred to as the cold mass, that then has to be inserted very carefully into the cryostat, using a forklift-like machine with a long pole at one end to hold the device and a heavy weight at the other for balance.

“It’s a tight fit between the cold mass and the thermal shield, and you have to insert the cold mass without scraping it,” said Ethan Anliker, mechanical engineer. “It’s a slow process, a foot at a time. But solving these challenges is fun for me. We’re building something unique. It’s a one-of-a-kind system.”

Cryogenic engineers Quentin Hasse and Yuko Shiroyanagi worked on this system, designing it to keep the various sections of the SCU at the required temperatures.

“I’m very pleased with the cold tests,” Shiroyanagi said. “They went even better than I expected.”

Following the test, the team disassembled the SCU, and they’re in the process of rebuilding it with the final components. Once it’s reassembled, they will consider this the first of the production units, and get started on the second.

“We’re happy with how well things worked and how much we learned, and we have a lot of confidence going forward,” said Kasa.

While there are eight SCUs slated to be installed in the upgraded APS, the other superconducting device built for the upgrade will be one of a kind. It’s called the Bunch Lengthening System (BLS), it makes use of a superconducting radio frequency cavity, and its job is to extend the life of the electron beam circulating around the APS.

Those electrons are traveling at nearly the speed of light, and the storage ring’s job is to keep them moving at that speed for as long as possible. Over time, that beam loses electrons as a result of scattering, and after a while, it no longer has enough electrons to produce the ultrabright x-rays needed for research. The current life of the electron beam in the APS is about 12 hours, but the upgraded APS will have a much denser beam, meaning it will be more prone to scattering. The upgraded APS beam would have a life of approximately an hour or two without this new system.

That’s where the BLS comes in. It will generate a high enough electric field to stretch out bunches of electrons as they circulate within the ring, thereby extending the beam’s life by two to four times. This will limit the disruption to research, a tremendous practical benefit to everyone using the APS.

In order to do this, however, the superconducting cavity that creates the electric field needs to be at 2.1 Kelvin (around -456 degrees Fahrenheit). This will require at least 100 gallons of liquid helium, pumped in by a large helium refrigeration unit. The recent test cooled down the entire superconducting cavity for the first time, and according to Physics Division Group Leader Michael Kelly, it performed admirably.

“The cavity exceeds the design goal,” Kelly said, noting that the electric field strength turned out to be three times higher than the design goal. “With this performance margin, we hope to get excellent, reliable performance from this cavity.”

Kelly and his colleagues plan to complete the assembly of the BLS in January 2022, integrating the superconducting cavity into the larger device. Like the SCUs, the BLS will be installed into the upgraded APS during the year-long upgrade construction period, currently scheduled to begin in April 2023.

“We’re very happy,” Kelly said. “We know the heart of the system works.”

The original Argonne feature story by Andre Salles can be read here.