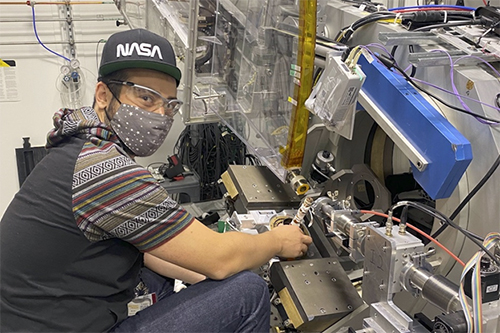 Growing up in small-town Wisconsin, Shua Sanchez’s exposure to science and university research was limited. At a young age, he became aware of climate change and read widely about ways to combat it, but it took until his final year at the University of Wisconsin-Madison for him to decide on a career in the field.

Along the winding path of post-secondary education, Sanchez found his footing as a scholar and scientist. He graduated in summer 2021 from the University of Washington (UW) with his Ph.D. in physics, including a year of research as a Clean Energy Institute (CEI) Graduate Fellow. He worked at X-ray Science Division x-ray beamlines 4, 6, 27, and 29 at the U.S. Department of Energy’s (DOE’s) Advanced Photon Source, an Office of Science user facility at Argonne National Laboratory, with support from the DOE Office of Science Graduate Student Research (SCGSR) Program. Shua has recently accepted a National Science Foundation (NSF) postdoctoral fellowship for a research position at the Massachusetts Institute of Technology (MIT) alongside Professor Riccardo Comin. Ultimately, he aims to become a physics professor where he can pursue the frontiers of energy science and advocate for underrepresented students.

“My advocacy work and dedication to research stems from my time at Wisconsin, where I was fortunate to receive a full, four-year scholarship,” Sanchez recalled. “At the time, I felt uncomfortable seeing other deserving students not receive the same level of support. However, the Chancellor’s Scholars program director, Mercile Lee, helped me understand that my scholarship money wasn’t a prize or a gift, but an investment in me by my community. I prioritize giving back to whatever community I’m part of at the moment, and I work hard in the lab so I can make good on that investment.”

Sanchez’s first taste of research came with a twist: at Wisconsin, he pursued a physics B.S. degree, but the most accessible opportunities for undergraduate research were related to neuroscience, not energy. He spent four years studying the effects of depression on human sleep thanks to an interdisciplinary NSF undergraduate research fellowship, but nonetheless maintained a strong interest in energy science. He applied to both neuroscience and physics Ph.D. programs, but ultimately decided to attend UW to study condensed matter physics.

“When I was looking at schools, I noticed that a lot of people that I wanted to work with had done their PhDs or postdocs at UW,” Sanchez said. “This was the key factor for me in my decision. Seattle was also appealing for a variety of reasons—including the music scene—and my visit just felt right.”

That gut feeling proved to be correct. Sanchez joined the lab of new UW physics professor Jiun-Haw Chu in spring 2016 and won a CEI Graduate Fellowship for the 2016-17 school year. It was his first award as a graduate student, funding three academic quarters of research on superconductors, an advanced class of materials that, among other properties, can transmit electricity with zero energy loss – if granted low-enough temperatures. While superconductors are widely used today in research instrumentation, Sanchez doesn’t think they will be a major part of energy infrastructure for many years, but he drew a parallel to his feelings about his own funding: researching future technologies now, like investing in young scientists and engineers, will pay dividends down the line.

“The CEI Graduate Fellowship has been a springboard for the rest of my career,” Sanchez said. “As a member of a new lab, CEI’s support allowed me to dedicate a year to developing a new combination of techniques to characterize advanced materials, including using X-rays to determine their electronic, magnetic, and other physical properties. These new methods have been central to my research from UW through Argonne and MIT. I’m grateful to have had my work supported by the DOE and the NSF, and to have three papers published in leading journals.”

“The other outstanding part of the fellowship for me was the CEI seminar series, which granted me a broader perspective on energy science — we learned about everything from solar panel efficiency to optimizing the energy grid. It was a great opportunity to hear what other fellows were working on, and I was able to make friends and network outside of my department. It even helped me feel more hopeful about climate change when I realized how many smart people were working on so many different aspects of the challenge.”

When Sanchez moved to the Pacific Northwest, he was immediately aware that his new community in Seattle and at UW was less diverse than he was used to, making it more challenging to make connections and find personal support. Sanchez, who has both Mexican and Italian heritage, is the first person in his family to get a science degree of any kind, and the first to get a PhD. At UW, he found community through common cause by joining the local student worker union, UAW 4121.

“Within the structure of academia, graduate students may face difficult situations, from lack of access to healthcare to racial or gendered harassment,” said Sanchez. “I volunteered my time with the goal of helping students stay in school in the face of these challenges. When I was involved with our union, we negotiated some of the strongest anti-harassment protections in the country, better access to mental healthcare services, and additional protections for international students.”

But Sanchez didn’t stop there: in 2018, he answered a call from the American Physical Society (APS) to enlist graduate students and faculty to push back against the PROSPER Act, a Congressional bill which, in spite of its name, would have reduced funding opportunities for middle and low-income graduate students by decreasing the quality and accessibility of student loans. He collected signatures on a petition for delivery to Senator Patty Murray and authored an op-ed in the Spokane Spokesman-Review urging her to halt the legislation. The campaign was a success, and for his efforts, Sanchez was recognized by APS with their prestigious 5 Sigma Physicist Award for “outstanding advocacy…crucial to maintaining the strength of the scientific enterprise.” In statistics, a five-sigma data point has a one-in-3.5 million chance of having occurred due to randomness, indicating a significant result under strong criteria.

“When the physicists at CERN [the European Organization for Nuclear Research] found the Higgs boson, they waited for a five-sigma result before making the announcement,” Sanchez remarked.

While Sanchez’s CV is already chock-full of awards, his longest-lasting impacts on science and equity are yet to be felt. At UW, Sanchez mentored five undergraduate students, all of whom are either women or underrepresented minorities; all five successfully completed their degrees in physics, and three have continued onto graduate school. And even after graduating, Sanchez joined a working group to advise CEI on diversity, equity, and inclusion (DEI) and provided key perspectives to the Institute’s leadership.

“I appreciated how CEI made a lot of room for diverse voices, including those of students, as part of their DEI initiative,” Sanchez said. “Based on my own experience as a CEI Graduate Fellow, I emphasized the impact that named awards can have on a student’s resumé — but more importantly, their confidence in the lab and their sense of belonging in research or at their institution.”

On Sanchez’s recommendation, CEI has created a new Undergraduate Research Award for outstanding Clean Energy Bridge to Research REU students, which fully funds a second summer in the lab alongside CEI researchers. The first recipients will be announced before the end of 2021.

After MIT, Sanchez dreams of becoming a physics professor at a mid-sized university, where he would continue his research into advanced materials for energy, utilize energy as a tool to teach physics, and encourage more diverse students to pursue a STEM education and a STEM career. But Sanchez envisions a future for the academic community where a focus on diversity and equity is the rule, rather than the exception:

“We need real systemic changes to increase equity,” he said. “It’s not enough for the handful of diverse scientists to do all this necessary diversity work. I’d like every researcher at every university to see it as part of the job.”