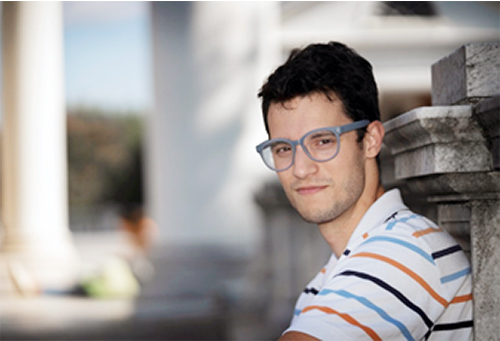 The original University of Virginia “UVAToday” story by Matt Kelly can be read here. © 2021 By The Rector And Visitors Of The University Of Virginia

Perrin Godbold is exploring green energy by trying to understand its most basic elements.

“My dissertation is on atomic control over nanocrystal catalysts for the purposes of green energy technologies,” Godbold, of Stanardsville, VA. said. “Even though nanomaterials are very tiny, atoms are even smaller, so one nanocrystal could have hundreds or even thousands of atoms in it, each one capable of doing chemistry. So, to be able to control the chemistry, you must control the synthesis of these materials down to the atom.”

A doctoral student in chemistry, nanomaterials, and electrocatalysis at the University of Virginia (UVA), Godbold recently received a roughly $14,000 U.S. Department of Energy (DOE) Science Graduate Student Research Award to work at the Argonne National Lab outside Chicago.

These awardees work on research projects that are of significant importance to the Office of Science’s mission and that address societal challenges at a national and international scale.

Sen Zhang, an assistant professor in UVA’s Department of Chemistry, operates a lab applying nanomaterials for green technologies. Godbold chose to work there and has come to appreciate the synthesis of the materials as much as how they are applied. Godbold sought the fellowship as an opportunity to work with the Argonne lab’s synchrotron, the U.S. Department of Energy Office of Science’s Advanced Photon Source at Argonne.

“A synchrotron is a particle accelerator,” Godbold said. “In my case, a high-energy x-ray beam will illuminate the sample and propagate within the atomic lattice. This gives us information about atomic environment with very high resolution.

“In our lab, we are quite capable of developing synthesis with atomic control of nanomaterials,” Godbold said. “To fully develop these materials and to understand what’s happening when the chemistry is actively occurring on the surface, though, is difficult and requires very expensive and high-end instrumentation.

“This fellowship provides me with the opportunity to work with Hua Zhou, a staff scientist with the Argonne X-ray Science Division Surface Scattering & Microdiffraction Group at the Advanced Photon Source, using the Lab’s beamline from a synchrotron source.”

Godbold chose his subfield of chemistry because he is fascinated by nanocatalysis and its application toward green energy and industry.

“Perrin is enthusiastic and energetic, has a broad knowledge of green energy technologies and he is a great mentor of our lab’s undergraduates,” said Sen Zhang, assistant professor in the Department of Chemistry. He’s been an important part of our close collaboration with Robert Gilliard and Thomas Gunnoe’s labs at UVA and with the Hua team at the Argonne National Lab. I can see him becoming a leader in this critical field.”

Godbold hopes to learn how to perform in situ x-ray absorption spectroscopy and surface scattering. This will allow him to determine what binds to what while the nanocrystal self-assembly (into particle, thin film or 2D sheet) is initiated and chemical reactions occur, giving a fundamental atomic and chemical picture of how the nanocatalysts form and work.

“This is quite important because catalysts are dynamic and it’s hard to have a rational feedback loop for designing catalysts unless you can ‘see’ what they look like as they perform the chemistry,” Godbold said. “So, this fellowship is an excellent opportunity for me to use world-class and rare instrumentation, finishing off my thesis with a detailed look into the mechanisms of the materials my lab and I have made over the last couple years.

“We proposed this specific project for the DOE award because in the Zhang lab we have been putting small amounts of different metals into metal oxides in an effort to make single, well-defined active sites and the combination of x-ray spectroscopy and scattering is the best techniques to determine if we’ve achieved our synthetic goals,” Godbold said. “The techniques I can learn and use at Argonne are so necessary for understanding nanocatalytic systems at the atomic level.”

“The unique assembly process of metal oxide nanocrystals which Perrin and Sen are working with remains to be revealed,” said Argonne’s Zhou. “Soon in the next few years, the x-ray capabilities benefited from the upcoming APS Upgrade could help render a dynamic view of the assembly process at the atomic scale. The new and deep understanding will much improve the control of precise synthesis.”

After graduation, “I hope to continue research in green energy, either within the government or private industry,” Godbold said. “Long-term, I’d like to help facilitate development and the adoption of green technology within companies, states, and nations.”

The U.S. Department of Energy's APS is one of the world’s most productive x-ray light source facilities. Each year, the APS provides high-brightness x-ray beams to a diverse community of more than 5,000 researchers in materials science, chemistry, condensed matter physics, the life and environmental sciences, and applied research. Researchers using the APS produce over 2,000 publications each year detailing impactful discoveries and solve more vital biological protein structures than users of any other x-ray light source research facility. APS x-rays are ideally suited for explorations of materials and biological structures; elemental distribution; chemical, magnetic, electronic states; and a wide range of technologically important engineering systems from batteries to fuel injector sprays, all of which are the foundations of our nation’s economic, technological, and physical well-being.