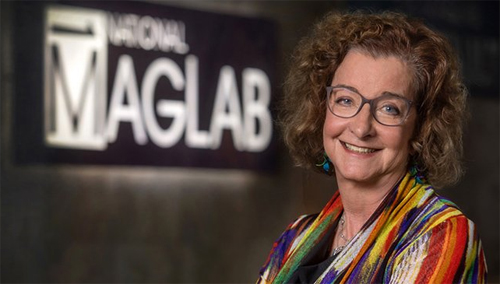 Laura Greene has been appointed by President Biden to serve on the President's Council of Advisors on Science and Technology (PCAST). Greene is the chief scientist at the National High Magnetic Field Laboratory located at Florida State University, the University of Florida, and Los Alamos National Laboratory; and a member of the Advanced Photon Source (APS) Scientific Advisory Committee.

"I am humbled and honored to be selected to advise the president on science and technology policy," Greene said. "I feel like this is my opportunity to serve my country in a way where I can make a real contribution and help ensure that America remains a global leader in both foundational and applied research."

Greene is a widely respected researcher on quantum materials and the mechanisms of unconventional superconductivity. She has held leadership roles in many of the nation's most prestigious science organizations, including president of the American Physical Society (APS) and a member of the Board of Directors for the American Association for the Advancement of Science (AAAS). Greene also is a member of the National Academy of Sciences, the American Academy of Arts and Sciences, the Institute of Physics (U.K.), and the APS. She has been awarded the E.O. Lawrence Award for Materials Research from the U.S. Department of Energy, the APS Maria Goeppert-Mayer Award and the Bellcore Award of Excellence.

Greene holds a bachelor's degree from Ohio State University and a master's degree and doctoral degree in physics from Cornell University. She has co-authored more than 200 publications and presented over 600 invited talks. She also holds an appointment at the University of Florida.

PCAST advises the President on matters involving science, technology and innovation policy, as well as on matters involving scientific and technological information that is needed to inform public policy relating to the economy, worker empowerment, education, energy, the environment, public health, national and homeland security, racial equity and other topics. Although similar science advisory committees date to 1933 under President Franklin D. Roosevelt, the first PCAST was appointed by President George H.W. Bush in 1990.

Drawing from the nation’s most talented and accomplished individuals, PCAST includes 20 elected members of the National Academies of Sciences, Engineering and Medicine, five MacArthur “Genius” Fellows, two former Cabinet secretaries, and two Nobel laureates. Its members include experts in astrophysics and agriculture, biochemistry and computer engineering, ecology and entrepreneurship, immunology and nanotechnology, neuroscience and national security, social science and cybersecurity, and more.

The members represent the most diverse PCAST in U.S. history. PCAST is traditionally co-chaired by the President’s Science Advisor and 1-2 external co-chairs; since its inception in 1957, no women have ever served as co-chairs. President Biden’s PCAST has two women co-chairs.