Ilavsky of XSD is a Fellow of the American Crystallographic Association 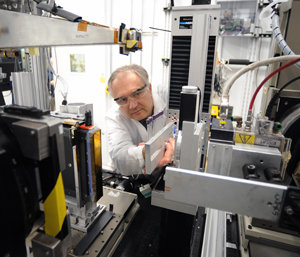 Jan Ilavsky, physicist and beamline scientist with the U.S. Department of Energy’s Advanced Photon Source (APS), has been named a Fellow of the American Crystallographic Association (ACA). Ilavsky is one of seven scientists named to the ACA Fellows class of 2021.

Ilavsky is a member of the Argonne National LaboratoryX-ray Science Division (XSD) Chemical & Materials Science Group, which operates or co-operates four x-ray beamlines at the APS.

In nominating Ilavsky for ACA Fellowship, APS users Fan Zhang and Andrew Allen (both National Institute of Standards and Technology) noted his “outstanding contributions in applied crystallography, including his seminal contributions in advancing the structure-property relationship of advanced functional materials, his global leadership in establishing a state-of-the-art x-ray scattering measurement platform and standards, developing  robust and widely used scattering data reduction and analysis software packages, and his extraordinary and sustained service to the American and international crystallographic community.”

In particular, they cited his work in the areas of scattering studies of thermal barrier coatings and other technologically important materials; development of the ultra-small-angle x-ray scattering facility at the APS, as well as the Irena and Nika small-angle scattering software packages and the Small-angle X-ray Scattering Intensity Standard; and training next-generation crystallographers through educational outreach (especially as the founder of the “Beyond Rg” small-angle x-ray scattering course at the APS, which is an intermediate level, week-long course run every two years since 2007 that has trained over 750 students, postdocs, and junior scientists).

“His scholarly publications on technologically important materials [more than 290 publications and over 10,000 citations] have had significant impact,” wrote Zhang and Allen. “He led the development and built the user program for an across-length-scale scattering and diffraction instrument at the APS, enabling simultaneous, in situ structure and microstructure characterization of a multitude of functional and structural materials with hierarchical structures. The APS ultra-small-angle x-ray scattering instrument represents a major advancement in materials characterization. His small-angle scattering (SAS) data reduction and analysis software have changed how the international small-angle scattering community handles SAS data. Jan Ilavsky has certainly earned the recognition of becoming an ACA Fellow.”

“All of us are delighted with this recognition of Jan’s enormous contributions to his field,” said XSD Director Jonathan Lang. “He is a long-standing, tireless, and invaluable member of our research staff. I know his colleagues, the hundreds of APS users he has supported, and the hundreds of students who have benefitted from the knowledge he freely shares join me in congratulating Jan.”