Blue Animals Are Different From All the Rest 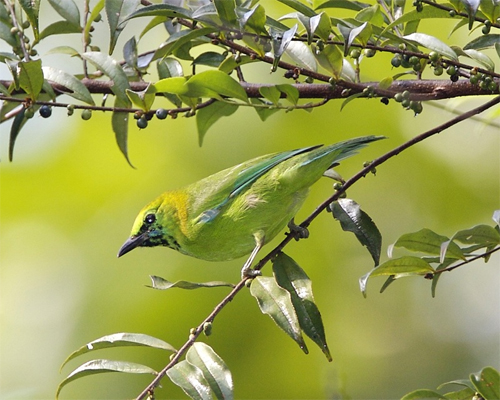 Peacocks, panther chameleons, scarlet macaws, clown fish, toucans, blue-ringed octopuses, and so many more: The animal kingdom has countless denizens with extraordinarily colorful beauty. But in many cases, scientists know much more about how the animals use their colors than about how they make them. New work continues to reveal those secrets, which often depend on the fantastically precise self-assembly of minuscule features in and on the feathers, scales, hair, and skin—a fact that makes the answers intensely interesting to soft-matter physicists and engineers in the photonics industry.

[But] work by [Richard] Prum [Yale University], Vinod Saranathan of Yale-NUS College at the National University of Singapore, and others in recent years has made progress on understanding how some birds produce the structural colors behind their brilliant blue plumage: a process of phase separation.

At high magnification, the colored barbs (filaments) of feathers have a foamy structure, with small, uniform spheres of air suspended in beta-keratin protein. The light scattering off each air bubble interacts with the light bouncing off neighboring bubbles. “And because they are just the right size to do this, they make a blue color, or a turquoise color, or an ultraviolet color,” Prum says.

Studies indicate that inside the cells of a developing bird feather, the beta-keratin starts out distributed in the watery cytoplasm. Chemical changes in the cell cause the beta-keratin and the water to spontaneously separate, creating spherical water droplets within a matrix of polymerized protein. After the cell dies, the water evaporates and the spaces fill with air, leaving a miniature ball pit of air bubbles that reflects light at just the right wavelength.

Prum likens the process to opening a bottle of beer. “Suddenly you get a condensation—the dissolved carbon dioxide forms a bubble, and the bubble grows to a certain size and then floats up,” he said. “This stuff looks just like the head on a beer.”

In the blue feathers of blue jays and most other birds, these bubbles are disordered. But at least one species, the blue-winged leafbird of Southeast Asia, gets the shimmery blue of its shoulder feathers from perfectly ordered bubble crystals, as Saranathan, Prum, and their colleagues reported in the Proceedings of the National Academy of Sciences of the United States of America on June 8, 2021. The researchers discovered these gyroid crystals when they put the leafbird feathers under a powerful [Advanced Photon Source] X-ray beamline at Argonne National Laboratory [an Office of Science user facility].

See also the APS science highlights: "An Absorbing Study of Plumage" and "Unlocking the Nanoscale Secrets of Bird-Feather Colors"