Glenn Decker Brings a Historical Perspective to the APS Upgrade 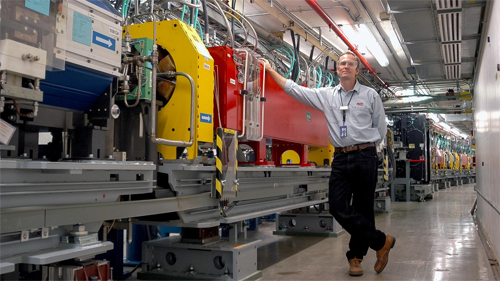 Glenn Decker started his career at Argonne National Laboratory in May of 1990.

One month later, the lab broke ground on the construction of the Advanced Photon Source (APS), which would become a DOE Office of Science User Facility at Argonne offering X-ray science resources to more than 5,500 scientists each year. As a member of the APS team, Decker got to help bring the original APS to life.

Now, 31 years later, he’s at the heart of the effort to modernize the APS, ensuring that the machine he helped build will continue to be a leading scientific instrument for decades to come. The APS Upgrade is a massive project that will, when completed, increase the brightness of the X-ray beams it generates by up to 500 times. It will accomplish this by replacing the centerpiece of the APS – an electron storage ring, designed to circulate tiny particles called electrons and use them to create X-ray light – with an entirely new, state-of-the-art model.

Decker, who serves as associate project manager for APS Upgrade accelerator systems, knows a thing or two about storage rings, which are one type of particle accelerator. He earned his Ph.D. from Cornell University in 1986, and while there, he got the chance to study on the university’s own particle accelerator, the Cornell Electron Storage Ring (CESR, pronounced Caesar). And it was there that he fell for accelerators – devices that use magnets to control the speed and direction of subatomic particles – and charted the course of his career.

“I thought the accelerator was just too cool,” Decker said. “And I decided then that I really like electrons, and synchrotron light sources.”

Decker, in fact, names the electron as his favorite particle, and says he is fascinated by X-ray synchrotron radiation, the light emitted by electrons as they are steered around a storage ring. He says he has Maxwell’s equations – the mathematical description of electricity, magnetism, and electromagnetic radiation – tattooed on his arms.

That fascination led him to Brookhaven National Laboratory for his post-doctoral research, working on the original National Synchrotron Light Source (NSLS), and after four years there, he came to Argonne to help construct the APS. He was hired to lead the diagnostics group, developing components to monitor the new accelerator’s electron beam, and after a year and a half was promoted to storage ring manager, a job he held for six years after that.

Decker’s job with the APS Upgrade project has him in an oversight role, with more than 100 people reporting to him. His usual day, he says, is full of meetings and emails, as his team undertakes the monumental task of designing and building a new storage ring. There are 1,321 magnets of various sizes and shapes to be assembled into modules, and those modules, when combined and aligned, will form a track for the electrons that is about two-thirds of a mile around.

“Six years ago we didn’t know whether these things would be possible,” Decker said. “A 4-meter long steel plate flat to the level of 10 microns (less than a quarter of the width of a human hair), magnet modules that weigh 40,000 pounds and must be perfectly aligned at the 30-micron level. Six years ago, we were asking, can you do that?”

Decker credits the ingenuity of the upgrade team with ensuring that the answer to that question is yes. The team, he said, has learned lessons from the experience of building the first APS. And since Decker was there the first time around, he knows the significance of the upgrade to the future success of the facility. That perspective, he says, has helped him immensely in his role with the upgrade project.

“I couldn’t do this job if I hadn’t done it the first time,” he said.

As an example, Decker tells a story about the magnet support structures built for the original APS. The structures are intended to keep the magnets steady, but vibration measurements showed that the APS magnets were moving between 20 and 50 times more than they should have been. It turns out the structures themselves were amplifying the ground movement, and the team had to come up with a fix: layers of double sticky tape under each girder to soak up the vibration.

“The support structures for the upgrade are much more massive, with a concrete and steel plinth upon which a thick steel plate sits, which in turn supports the magnets,” Decker said. “The upgrade’s magnets will vibrate at least a factor of 10 less than the present APS magnets do.”

One similarity he sees between the original APS design and construction and the current APS Upgrade is the willingness to tackle difficult engineering challenges. The tools are much better now, he said, and simulations are easier with much faster computers, so what may have seemed impossible 30 years ago can now be done.

“We have an outstanding team,” Decker said. “We have a lot of key people who set the foundations we are building on. There are a number of people who built the original APS who have been critical to the design of this new project. And we have a large number of next-generation people who will take the new machine into operations.”