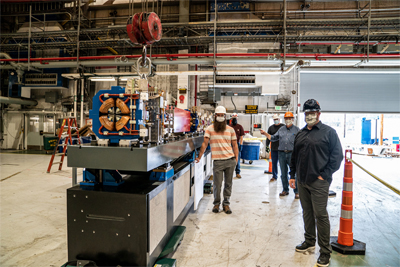 If you ever built a complex model out of LEGOs, you know the value of assembling parts of that model in pieces before attaching them to the whole. That same strategy is being used to upgrade the electron storage ring at the heart of the Advanced Photon Source (APS), a U.S. Department of Energy Office of Science User Facility at Argonne National Laboratory.

The APS Upgrade project recently achieved a significant milestone with the first practice assembly of a module of powerful magnets. Ultimately 200 modules similar to this one will make up the new storage ring. A team of engineers and riggers used heavy cranes to lift magnets, some weighing thousands of pounds, and connect them to a cast iron girder and concrete plinth to form a module. This module will be disassembled and reassembled several times over the coming weeks to ensure that the process is as smooth as possible.

This research used resources of the Advanced Photon Source, a U.S. Department of Energy (DOE) Ofﬁce of Science User Facility operated for the DOE Ofﬁce of Science by Argonne National Laboratory under Contract No. DE-AC02-06CH11357.