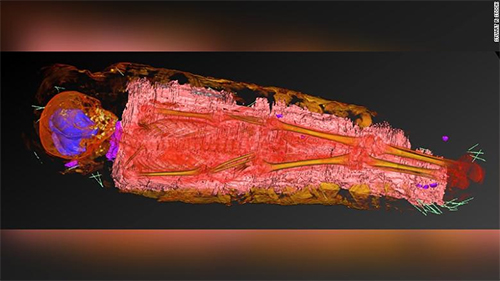 The original CNN story by Amy Woodyatt can be read here.

Scientists have pioneered a new technique that allows them to investigate the insides of a 1,900-year-old mummy -- without having to open up and tamper with the ancient artifact.

Researchers used a new combination of CT (computed tomography) technology and X-ray diffraction to reveal clues about a Roman-era Egyptian mummy, which was discovered in Hawara, Egypt.

For nearly a century, Egyptian mummies have been imaged noninvasively with X-rays. In findings outlined in the Journal of the Royal Society on Tuesday, the team of researchers described using a combination of CT scanning and X-ray diffraction for the first time, revealing clues about the ancient corpse lying inside.

Using a CT scan to create a "three dimensional roadmap" of the contents of the mummy, experts shone X-ray beams smaller than the diameter of a human hair onto the mummy to identify the objects inside the item's wrappings, lead author Stuart Stock told CNN.

"The X-rays give off what is essentially a fingerprint that is characteristic of the material," Stock, a researcher at Northwestern University's Feinberg School of Medicine in Chicago, explained.

What the experts from Northwestern University, Argonne National Laboratory and Metropolitan State University of Denver found on the body -- thought to belong to a 5-year-old child -- surprised them.

was in the upper echelons of society" if such a pure material was used in their burial, Stock said.

"They could afford to have a scarab and mummification, which required a tremendous amount of resources," he said.

The technology revealed clues about the ancient corpse -- including a small scarab beetle in the abdomen.

A study of the body also showed the child, thought to be a girl, did not suffer a violent end.

"It looks like there was no skeletal trauma," Stock said. "We don't know why this young child died."

A portrait attached to the mummy also reveals further clues about its occupant, with the hairstyle depicted dating the mummy to between 150 and 200 AD. Portrait mummies have a lifelike painting of the deceased incorporated into the mummy wrappings and placed over the person's face.

Experts believe that the technique could be used for further studies on mummies, giving further clues as to the object buried alongside the ancient corpses, without the need to disturb and tamper with bodies.

"Back in the day (in Victorian times), they would take them apart," Stock told CNN. "We don't like to do that anymore."

In 2017, Northwestern University posted an article on the study, which can be read here.