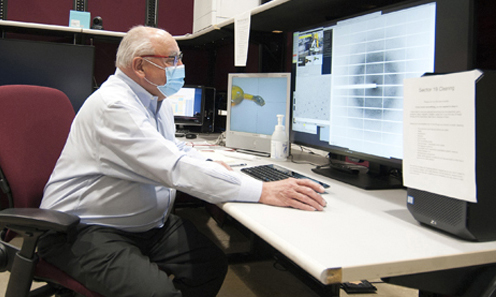 The original Argonne feature by Andre Salles can be read here.

The COVID-19 pandemic has caused a global health emergency, and the response from the scientific community has been similarly global. Scientists from every corner of the world have worked tirelessly to understand more about the SARS-CoV-2 virus that causes the disease, in order to combat it more effectively.

One of the best facilities in the world for research into the structure of the SARS-CoV-2 virus is in the United States: The Advanced Photon Source (APS), a U.S. Department of Energy (DOE) Office of Science User Facility located at DOE’s Argonne National Laboratory. The APS, one of the most productive light sources in the world, generates powerful X-ray beams that scientists use to precisely determine the structures of the proteins that make up the virus, laying the groundwork for drug treatments and vaccines.

Since the start of the outbreak and at the time of writing (11/11/2020), more than 8,000 hours of beam time have been used to study SARS-CoV-2, and more than 70 teams of researchers from around the country have used the APS to further their work to stop the spread of the virus. In addition, the APS is so critical to the effort to combat the pandemic, that it operated for 10 percent more hours than usual this year, with the additional time supported by the DOE Office of Science through the National Virtual Biotechnology Laboratory, with funding provided by the Coronavirus CARES Act.

Most of those researchers have been using the APS remotely, through a state-of-the-art system that allows scientists to safely control the APS beamlines from their own institutions, or even their homes.

Sixteen beamlines have been dedicated to determining the structures of the virus’ proteins for the past six months, and as of November 2020, 95 structures taken from APS data have been submitted to an international protein data bank, for use by the world scientific community.

Argonne researchers and members of the Center for the Structural Genomics of Infectious Diseases (CSGID), which is led by Karla Satchell of Northwestern University and Andrzej Joachimiak of Argonne and the University of Chicago, have determined more than half of those. The rest are products of remote research conducted by scientists from across the country. Results of this work are appearing in scientific journals, and as of November 2020, 15 papers have been published.

“This remote research is possible because we invested so much over the past 15 to 20 years to automate the system,” Joachimiak said. ​“This is important work and we are in a position to help facilitate it.”

Here are just a few of the researchers making use of the APS remotely to study the SARS-CoV-2 virus.

Like many of the APS users researching COVID-19 at the APS, Fang Li is no stranger to this type of work. His group at the University of Minnesota has been studying the original SARS virus, SARS-CoV, for more than a decade, and were the first to determine the structural basis of that virus’s receptor recognition, an initial step of the infection cycle. Many of the principles learned during that research also apply to SARS-CoV-2, Li said, even though this new virus has unique features.

Li’s group used the Northeastern Collaborative Access Team (NE-CAT) beamlines, and was the first to publish results from remote SARS-CoV-2 analysis at the APS. Their paper, published in Nature in March, was the first in the world to use X-ray crystallography to determine the structure of a SARS-CoV-2 protein that binds to its receptor — essentially, how the virus connects to human cells. If scientists can fully understand the ways in which the virus attaches itself to healthy cells, they can devise a blocking agent to prevent the virus from spreading.

“Blocking the virus-receptor interactions is one of the most important strategies for treatments and/or vaccinations,” Li said.

Hoping to have a result quickly, the University of Minnesota team sent several smaller crystals to the APS, rather than wait to grow larger ones. But Li noted that the beam was so good and data collection so streamlined that they were able to perform the analysis they needed from these smaller samples.

“Only with the APS’s great support and excellent facilities were we able to finish the structural study in record speed,” Li said. ​“Structural biology plays an important role in the battle against COVID-19, and the APS provides essential support to structural biologists and has been essential in addressing the COVID-19 pandemic.”

Since publishing that first paper, Li’s group has continued to study SARS-CoV-2’s infectivity using structural biology tools, including investigating how the virus evades the host’s natural immune surveillance. Li and his colleagues are developing vaccines and drugs to combat the virus, and in Li’s words, they are making good progress.

Ian Wilson is also no novice when it comes to infectious diseases. A professor of structural biology at the Scripps Research Institute in California, Wilson has long studied antibody responses to viruses such as HIV, influenza, and hepatitis C as well as the malaria parasite P. falciparum — the lab he runs at Scripps was started to further this work — and it is this experience he and his colleagues are drawing from when it comes to analyzing antibody responses to SARS-CoV-2.

Antibodies are the body’s natural response to viral infections, the immune system’s way of combating disease. Wilson and his group started their work with an antibody pulled from survivors of the SARS-CoV epidemic in the early 2000s, testing to see if it could be as effective in fighting off this new coronavirus. The results of their work, performed at the APS using the National Institute of General Medical Sciences and National Cancer Institute Structural Biology Facility (GM/CA-XSD), published in Science in April. Their analysis was the world’s first to observe the binding of SARS-CoV-2 to a human antibody at an atomic scale.

What they found was a nearly identical spot on both coronaviruses to which the anti-SARS antibody binds, a potentially important site of vulnerability for further research to build on. The antibody itself, Wilson said, binds to the new coronavirus about 100 times less tightly than it does to the original SARS virus, and does not neutralize it.

The next step, Wilson said, was to look at antibodies from patients of the SARS-CoV-2 virus as they started to emerge, and his team is working on many of these now.

“The good news is that convalescent patients can make good neutralizing antibody responses,” Wilson said. ​“It’s important to find out where the antibodies are binding. We are working to ascertain what the epitopes are for the most potent antibodies on the SARS CoV-2 receptor binding domain, and whether cross-reactive sites of vulnerability can be found in other SARS-like viruses.”

This information, Wilson said, is useful in assessing the immune response to the COVID-19 pandemic as well as to the many vaccine candidates that are now in development. A lot of antibodies are now available for research and for use as potential therapeutics.

“It’s amazing how the world has come together to work on this pandemic,” Wilson said. ​“Structural biology has sophisticated tools available that have been developed over many years. All of the techniques developed for previous infectious diseases are instantly transferable to SARS CoV-2.

“We are therefore able to move forward very quickly, and we very much appreciate the light source facilities, such as the APS, being open and available for COVID-19 work throughout the pandemic so far,” he said.

Like her colleagues, Erica Ollmann Saphire has a long history researching infectious viruses. A professor at the La Jolla Institute for Immunology, she and her team have extensively studied the Ebola virus, among others, using human antibodies to point toward treatments and vaccines. But while she is conducting antibody research of her own into SARS-CoV-2 using the National Institute of General Medical Sciences and National Cancer Institute Structural Biology Facility (GM/CA-XSD) at the APS, her focus is on a wider view of the pandemic and how to fight it.

Since 2014, Ollmann Saphire has been the guiding light behind the Viral Hemorrhagic Fever Immunotherapeutic Consortium, which puts 43 previously competing laboratories and institutions on the same page to develop antibody-based treatments against the world’s deadliest viruses. Through her work in structural biology she realized that research teams around the world were working in isolation, using limited numbers of samples and small amounts of information. The consortium model, she says, rectifies that, making information on a larger array of anonymized samples available to the whole, so the samples and methods can be compared and contrasted.

Recently she has started an offshoot, the Coronavirus Immunotherapy Consortium (CoVIC), to tackle SARS-CoV-2 specifically using the same model.

“We have everything running in parallel,” she said. ​“We can compare methods side by side and see which is the most predictive of human clinical success. We’re looking for antibody combinations that is durable and stable, to save lives everywhere in the world.”

Competition, Ollmann Saphire said, is good because it fosters innovation. CoVIC now hosts a library of specific- and cross-reactive antibody therapeutics, which will help with the next coronavirus outbreak, she said. The different strategies each of the CoVIC members use in their research leads to multiple strong outcomes that can be compared and combined.

She praised national laboratories such as Argonne for making facilities like the APS available for scientists to use, and said that remote access is even more appealing, since it doesn’t require travel time and resources.

“The national facilities where anyone can get information, that’s the way forward,” she said. ​“Democratic access is everything.”