Ming Du and Chris Jacobsen have been awarded 250,000 node hours on the Argonne Leadership Computing Facility’s Theta computer by the U.S. Department of Energy’s (DOE’s) Advanced Scientific Computing Research (ASCR) program Leadership Computing Challenge (ALCC). The computer time will be used for “Distributed large wavefield propagation and 3D reconstruction beyond the depth of focus limit.” Du is an Advanced Photon Source (APS) postodoctoral appointee; Jacobsen is an Argonne National Laboratory Distinguished Fellow and Special Advisor to the APS Director for Imaging and Instrumentation, and a professor in the Department of Physics and Astronomy at Northwestern University. In all, 24 projects were awarded  a total of 5.74 million node hours on the ALCF’s Theta supercomputer “to pursue challenging, high-risk, high-payoff simulations,” according to the ALCF web site.

The object of their research is to develop methods to image beyond the depth of focus limit of conventional x-ray microscopy.  As the Advanced Photon Source sets out on its upgrade project to dramatically increase x-ray brightness, it will enable new capabilities for 3D nanoscale imaging ― but to do this on the thick samples that are accessible in x-ray imaging, one must use computationally-demanding techniques to incorporate beam propagation effects.  This ALCC project uses “automatic differentiation” and "adjoint sensitivity analysis" to do so; the former was described in a recent article in Science Advances co-authored by Du, Jacobsen, Doğa Gürsoy, Youssef S. G. Nashed, and Saugat Kandel, while the latter has the potential to reconstruct large-volume samples more efficiently.

The mission of the ALCC is to provide an allocation program for projects of interest to the DOE with an emphasis on high-risk, high-payoff simulations in areas directly related to the DOE mission and for broadening the community of researchers capable of using leadership computing resources. ALCC awards support scientists from industry, academia and national laboratories advancing scientific and technological research in DOE mission areas including Biophysics, Energy Efficiency in Aerospace and Combustion technologies, Fusion Energy, Geosciences, High Energy Physics, Materials Sciences, Nuclear Engineering, and Nuclear Physics. 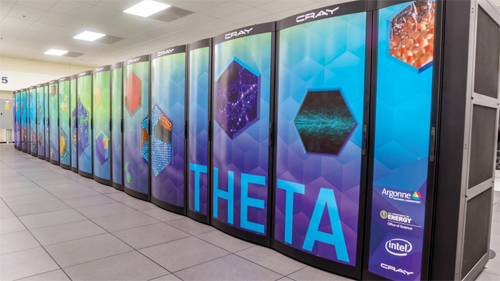 The Argonne Leadership Computing Facility’s Theta is an 11.69-petaflops supercomputer based on Intel processors and interconnect technology, an advanced memory architecture, and a Lustre-based parallel file system, all integrated by Cray’s HPC software stack. The award to Ming Du and Chris Jacobsen was one of 24 projects (a total of 5.74 million node hours) awarded time at the Argonne Leadership Computing Facility to pursue challenging, high-risk, high-payoff simulations.

The authors acknowledge the National Institute of Mental Health, National Institutes of Health, for support under grant R01 MH115265. This research used resources of the Advanced Photon Source and  the Argonne Leadership Computing Facility, which are U.S. Department of Energy (DOE) Office of Science User Facilities operated for the DOE Office of Science by Argonne National Laboratory under contract no. DE-AC02-06CH11357.