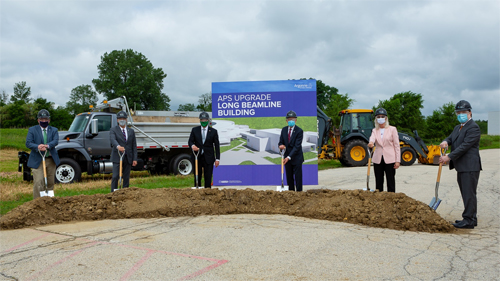 The two new beamlines will be constructed as part of a comprehensive upgrade of the APS, enhancing its capabilities and maintaining its status as a world-leading facility for x-ray science.

In a socially distanced ceremony held on the morning of July 22, 2020, at the U.S. Department of Energy’s (DOE) Argonne National Laboratory, leaders from DOE, Argonne, and the University of Chicago broke ground on the future of x-ray science in the United States.

Today’s small gathering marked the start of construction on the Long Beamline Building, a new experiment hall that will house two new beamlines that will transport the ultrabright x-rays generated by the Advanced Photon Source (APS) to advanced scientific instruments. It will be built as part of the $815 million upgrade of the APS, a DOE Office of Science User Facility and one of the most productive light sources in the world. The APS, which is in essence a stadium-sized x-ray microscope, attracts more than 5,000 scientists from around the globe to conduct research each year in many fields ranging from chemistry to life sciences to materials science to geology.

“The upgrade of the APS is not only an exciting scientific project, but it is vital to ensuring that Argonne and the United States remain world leaders in x-ray science,” said DOE Under Secretary for Science Paul Dabbar, who attended today’s ceremony. ​“An upgraded APS, including these two longer beamlines, will lead to new innovations in energy efficiency, more durable materials and more tools to combat viral pandemics.”

The APS Upgrade will replace the already powerful electron storage ring at the heart of the facility with a state-of-the-art magnet lattice system that will increase the brightness of the x-rays generated by up to 500 times. As part of this project, nine new beamlines will be constructed around the existing storage ring to facilitate a variety of research aims; the Long Beamline Building will host two of them.

“The APS Upgrade is a cornerstone of Argonne’s future,” said Argonne Director Paul Kearns. ​“In conjunction with other unique resources such as Argonne’s supercomputers, the new beamlines at the upgraded APS will allow the pursuit of science at a scale previously thought impossible, enabling greater impact from breakthroughs in healthcare, manufacturing, national security, transportation and energy.”

As the name implies, the beamlines housed in the Long Beamline Building will be about three times longer than those currently at the APS, sending photons further from the source to reach the samples being analyzed. This distance allows for more focused x-ray beams, allowing scientists to look at something as small as the finest structure inside even the most compact computer chip, in real time.

The new facilities will also have greater capability for in situ imaging, meaning observing samples as scientists change the environment around them. This will allow for precise measurement of the impact of temperature, pressure and other factors on advanced materials, an important step toward creating the next generation of components for everything from aircraft engines to solar cells.

“Our goal is to create the most advanced and comprehensive facility we can for the scientists from across the United States and around the world who use the APS,” said Robert Hettel, project director for the APS Upgrade. ​“These improvements will be a game changer for the facility, and for x-ray science as a whole.” 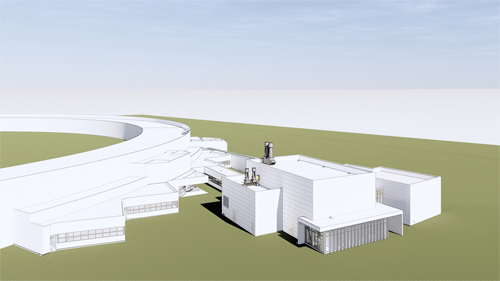 The Long Beamline Building will house:

Today’s ceremony symbolically kicked off the construction phase of the Long Beamline Building, the only externally visible part of the APS Upgrade.

Construction is scheduled to begin this fall, with a proposed completion date in mid-2022 for the Long Beamline Building. First light for the APS Upgrade is expected in late 2023.

“The APS Upgrade will be transformational,” said Stephen Streiffer, Argonne’s deputy laboratory director for science and technology and director of the APS. ​“For users of the APS, it will be like the difference between walking and flying a jet airplane. It will revolutionize our ability to explore the boundaries and horizons of science, and the Long Beamline Building will allow us to take full advantage of the upgrade’s capabilities.”

Chris Fall, Director, U.S. Department of Energy Office of Science
​“The Office of Science fully supports the APS Upgrade and the opportunities for discovery it presents at Argonne. DOE’s national laboratories are the crown jewels of our nation’s research enterprise, and as the stewards of these national treasures, the Office of Science is committed to ensuring they continue to thrive for years to come.”

Joanna Livengood, Manager, Argonne Site Office, U.S. Department of Energy
​“It’s gratifying to see the APS Upgrade move forward, and the Long Beamline Building break ground. This project is an important one for the Office of Science, and a strong step forward for science in the United States.”

Jim Kerby, Chief Project Officer, APS Upgrade
​“Today’s ceremony is the culmination of years of work on the APS Upgrade and the Long Beamline Building by a dedicated team and I’m pleased to represent them and share in this celebration. We all look forward to the construction of the building, and of the Upgrade as a whole, in the coming years.”

Jonathan Lang, Director, X-ray Sciences Division, Argonne
​“The Advanced Photon Source is already one of the best facilities in the world for x-ray science, and the Upgrade, including the Long Beamline Building, will only make it more vital for addressing a wide-range of problems important to the global science community. We’re excited to be writing the next chapter in the story of our facility.”

Anthony Rollett, U.S. Steel Professor of Materials Science and Engineering, Carnegie Mellon University
​“As a long-time user of high energy beamlines for diffraction microscopy, ultra-high speed microscopy, high speed diffraction and tomography, I am grateful for the unique capabilities afforded by the APS, particularly for high density materials such as metals.  The forthcoming upgrade is exciting to my group for many reasons and above all the increased intensity and coherence available at any given energy which we anticipate will make it substantially easier to perform Bragg Coherent Diffraction experiments on polycrystalline materials.  It will also bring about enhanced capability in several other areas, some of which may not emerge until we work with the actual new beams.”

About the Advanced Photon Source

The U. S. Department of Energy Office of Science’s Advanced Photon Source (APS) at Argonne National Laboratory is one of the world’s most productive x-ray light source facilities. The APS provides high-brightness x-ray beams to a diverse community of researchers in materials science, chemistry, condensed matter physics, the life and environmental sciences, and applied research. These x-rays are ideally suited for explorations of materials and biological structures; elemental distribution; chemical, magnetic, electronic states; and a wide range of technologically important engineering systems from batteries to fuel injector sprays, all of which are the foundations of our nation’s economic, technological, and physical well-being. Each year, more than 5,000 researchers use the APS to produce over 2,000 publications detailing impactful discoveries, and solve more vital biological protein structures than users of any other x-ray light source research facility. APS scientists and engineers innovate technology that is at the heart of advancing accelerator and light-source operations. This includes the insertion devices that produce extreme-brightness x-rays prized by researchers, lenses that focus the x-rays down to a few nanometers, instrumentation that maximizes the way the x-rays interact with samples being studied, and software that gathers and manages the massive quantity of data resulting from discovery research at the APS.