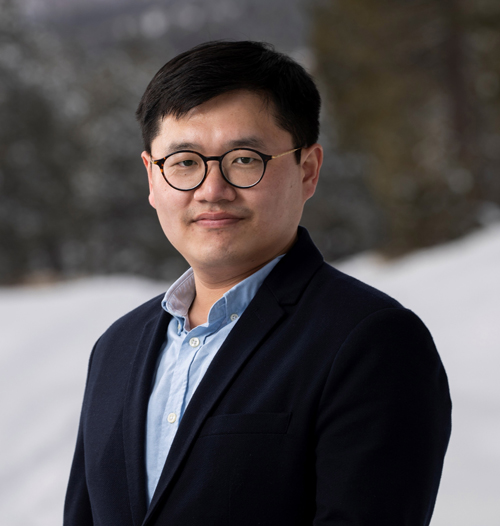 The Advanced Photon Source Users Organization (APSUO) is pleased to announce that Hsinhan (Dave) Tsai of Los Alamos National Laboratory (LANL) is the recipient of the 2020 APSUO Rosalind Franklin Young Investigator Award. In his Franklin award nomination letter, Joseph Strzalka of the Argonne X-ray Science Division Dynamics & Structure Group at the APS noted Tsai’s “prolific record of high impact achievements, driving innovations in instrumental capabilities and fostering new collaborations. Dave’s continuing research into opto-electronic applications of perovskites represents some of the most creative and versatile use of [beamline] 8-ID-E, pushing the boundaries of grazing-incidence wide-angle x-ray scattering (GIWAXS) with simultaneous auxiliary probes and GIWAXS coupled with characterization at other beamlines.” His research using the GIWAXS technique spans the full framework of the Franklin award’s parameters, representing both groundbreaking scientific achievements and exciting technical accomplishments. Tsai is a J. Robert Oppenheimer (JRO) Distinguished Postdoc Fellow at LANL. He received his Ph.D. in materials science and nanoengineering from Rice University; an M.S. in polymer chemistry from the Institute of Organic and Polymeric Materials–National Taipei University of Technology; and a B.S. in chemistry from Fu Jen Catholic University.

Hsinhan’s research interests focus on fundamental materials science, including materials synthesis and structure-function relationships in organic-inorganic hybrid perovskite semiconductors for optoelectronics (photovoltaics and LEDs), energy storage, quantum and spin device applications. During his Ph.D. studies, he developed a novel “hot-casting” approach to precisely control the crystalline structure and long-range crystal orientations to obtain high quality 3D and 2D perovskites semiconducting thin films that suppress the non-radiative recombination and improve the charge transport and collection for high performance electronic device operation. Hsinhan’scurrent research at LANL focuses on integrating 2-dimensional hybrid perovskites-based materials in functional devices, such as a high-energy radiation detector and lighting device and magnetic spin devices. His work also explores other novel properties, such as time-resolved structural dynamics and coupled magnetic and electrical properties in 2D quantum materials. In 2012, he received a Los Alamos Distinguished Performance Award for Small Teams for his contribution in using conjugated polymer for sensor applications, as well as a Graduate Student Gold Award from the Materials Research Society for his “particularly significant and timely research” of hybrid perovskites materials and their applications in photovoltaics and LEDs in 2018. In 2004, in conjunction with the APS, the APSUO established the Rosalind Franklin Young Investigator Award to recognize an important scientific or technical accomplishment by a young investigator (senior graduate student or early career Ph.D.)at, or beneficial to, the APS. Rosalind Franklin was a brilliant chemist who played a critical but largely unacknowledged role in the discovery of the structure of DNA. While working as a research associate for John Randall at King’s College in 1951, Franklin was assigned to study the unwieldy DNA molecule with x-ray crystallography – a technique only just beginning to be used for biological molecules. Her results revealed the position of the sugar-phosphate backbone and the basic helical structure of the molecule; when her x-ray photographs filtered unofficially to John Watson at Cambridge, he immediately saw their implications. Franklin went on to work on the tobacco mosaic virus and the polio virus, but her career came to an untimely end when she died of cancer in 1958 at the age of 37.