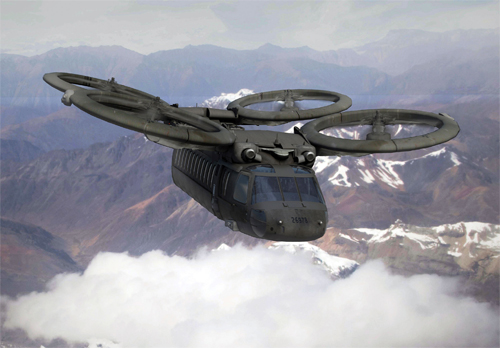 The Army's Future Vertical Lift program is one of the modernization priorities for Army leadership. With the use of advanced X-ray diagnostics, scientists have a better understanding of gas turbine combustor inlet conditions, which is critical for the design and development of engines for the next generation of Army aircraft.

The FVL concept is to create a new rotorcraft that uses new technology, materials and designs that are quicker, have further range, better payload, are more reliable, easier to maintain and operate, have lower operating costs and can reduce logistical footprints.

That is the focus of a team of Army and university researchers. Through an essential research program known as Versatile Tactical Power and Propulsion, they developed a single sector gas turbine combustor experimental capability to study the variation in the breakup and atomization of fuel sprays while combusting using high-speed X-ray phase contrast imaging.

U.S. Army Combat Capabilities Development Command's Army Research Laboratory researchers along with University of Illinois at Urbana-Champaign professor Tonghun Lee and graduate students from his research group designed and built out the combustor and associated experimental apparatus. The team conducted their experiments at X-ray Science Division x-ray beamline 7-BM-B at the Advanced Photon Source, an Office of Science user facility at Argonne National Laboratory (ANL), where they were assisted by Dr. Alan Kastengren, beamline scientist at ANL. 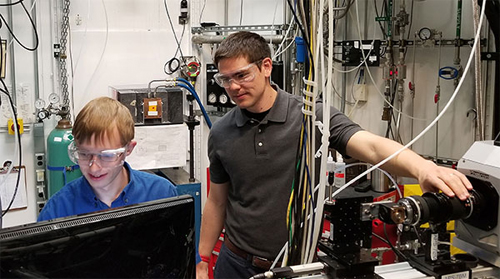 "Accurate computation fluid dynamics, or CFD, models for fuel sprays at realistic conditions are essential for predicting engine performance; where the injected fuel is distributed in the combustor or cylinder determines how the combustion occurs," said Eric Mayhew, CCDC ARL researcher.

To develop these kinds of models, scientists said they employ carefully designed experiments that simulation experts can use to inform and validate their codes.

Researchers said this spray breakup and atomization process is especially challenging with the addition of ongoing combustion as the flame naturally emits light at wavelengths used for traditional optical and laser diagnostics on top of the numerous additional safety issues.

"X-rays are able to pass entirely through the flame and penetrate these dense regions of the spray while maintaining sufficient image contrast at the liquid boundaries," Mayhew said. "As a result, flame-coupled spray behavior near the nozzle or injector tip remains an under-developed piece of these spray models. The experiments conducted at the Advanced Photon Source at Argonne National Laboratory aim to fill this gap."

To study the effects of different kinds of fuels on atomization and ignition processes, ARL, UIUC and industry scientists designed the ARL research combustor-midsize 1, or ARC-M1 and ARL research combustor-large 1, or ARC-L1. Both combustors simulate a single combustor cup of a gas turbine engine; in a real gas turbine engine, several identical combustors would be located in a ring around the engine's central axis, operating in tandem.

"The ARC-M1 and L1 systems are interrogated using the most advanced diagnostics possible -- the measurements at the Argonne APS are part of this effort," Lee said. "As a consequence, we anticipate gaining critical insight into the physicochemical dynamics of advanced gas turbine propulsion systems for future Army vehicles."

Researchers are encouraged by the results.

"While the first experiments explored the simplified system of the interaction of a water spray with the turbulent, swirl of the ARC-M1, the second phase of experiments in April 2018 were the first spray combustion experiments ever conducted at APS," Mayhew said. "Additional improvements and modifications were made to the experimental setup to enable the most recent experiments conducted in August 2019, with combustor pressures up to three times atmospheric pressure, which closely simulate inlet conditions in current Army vehicles."

The researchers are advancing the experimental setup and designs to get to relevant conditions to the Army systems, said the lab's Dr. Mike Kweon, program manager. He said they are adding a capability to simulate altitude conditions at ANL's APS.

"In any engine combustion process, everything starts from fuel spray, atomization, mixing with air and ignition, Kweon said. "Understanding and knowledge of these processes are crucial in analysis for engine development -- however, accurate spray and atomization measurements have been challenged as most of light sources could not penetrate the dense liquid regions and the other advanced optical diagnostics could not accurately measure the atomization process in combustion as liquid droplets are highly dependent on flames.

"The new discovery and understanding of atomization process in combustion of gas turbine engines can lead to innovation in spray and evaporation models that can be used in commercial CFD tools."

"Understanding of atomization and ignition for a wide range of military fuels is extremely critical for the Army to develop new future capabilities," Kweon said. "For example, future air launched effect -- an unmanned aircraft system launched from Army's FVL aircrafts needs to be powered, in part by an engine."

The CCDC Army Research Laboratory (ARL) is an element of the U.S. Army Combat Capabilities Development Command. As the Army's corporate research laboratory, ARL discovers, innovates and transitions science and technology to ensure dominant strategic land power. Through collaboration across the command's core technical competencies, CCDC leads in the discovery, development and delivery of the technology-based capabilities required to make Soldiers more lethal to win our Nation's wars and come home safely. CCDC is a major subordinate command of the U.S. Army Futures Command.