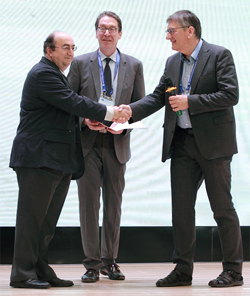 Ercan Alp of the Argonne X-ray Science Division is a recipient of the IBAME (In ternational Board of applications of Mössbauer Effect) 2019 Science Award. The award was presented to Alp “in recognition of his outstanding contributions to the development of synchrotron radiation techniques and their scientific applications based on the Mössbauer effect.” The award was shared by Prof. Israel Nowik of the Hebrew University of Jerusalem.

Alp is with the Argonne X-ray Science Division Inelastic X-ray & Nuclear Resonant Scattering Group at the U.S. Department of Energy’s Advanced Photon Source. The IBAME Science Award is granted to researchers for a high-quality contribution to science based on research that involves application of the Mössbauer Effect over an extended period of at least 20 years.

The awards were presented in Dalian, China, on September 4, 2019, by Michael Reissner of Vienna Technical University, and Chairman of the IBAME board, and Ralf Röhlsberger of University Hamburg, and of DESY. 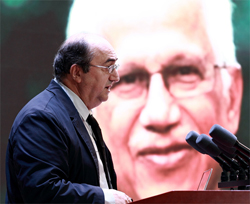 Alp said that he “accepted the award on behalf of the APS team. I paid special tribute to the late Gopal Shenoy for his continuous support and encouragement throughout my career.”

Alp’s talk at the ceremony was entitled, “Four decades of nuclear resonant scattering in the synchrotron era.”

The Mössbauer effect, or recoilless nuclear resonance fluorescence, is a physical phenomenon discovered by Rudolf Mössbauer in 1958. It involves the resonant and recoil-free emission and absorption of gamma radiation by atomic nuclei bound in a solid. Its main application is in Mössbauer spectroscopy.

In the Mössbauer effect, a narrow resonance for nuclear gamma emission and absorption results from the momentum of recoil being delivered to a surrounding crystal lattice rather than to the emitting or absorbing nucleus alone. When this occurs, no gamma energy is lost to the kinetic energy of recoiling nuclei at either the emitting or absorbing end of a gamma transition: emission and absorption occur at the same energy, resulting in strong, resonant absorption. (Mössbauer effect information source.)