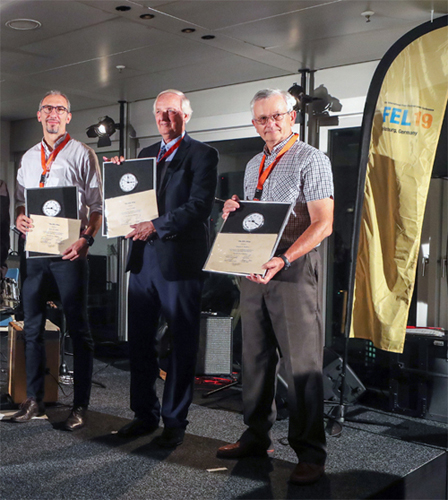 Alex Lumpkin, formerly with the Advanced Photon Source (APS) at Argonne and currently an Argonne Associate with the Advanced Photon Source Upgrade Project (APS-U), was one of three recipients of the 2019 FEL Prize, awarded at the 39th International Free Electron Laser Conference (FEL2019), held at the University of Hamburg, Germany, from August 26th to August 30th, 2019. The FEL prize is given to a person or persons who have contributed significantly to the advancement of the field of free-electron lasers. Alex was cited “for his seminal, time-resolved measurements of dynamics in FEL oscillators and the elucidation of microbunching in relativistic electron beams and SASE [self-amplified spontaneous emission] FELs.” The other awardees were Enrico Allaria (Sincrotrone Trieste) and Gennady Stupakov (SLAC National Accelerator Laboratory).

For the Los Alamos National Laboratory FEL oscillator project, Alex compiled a number of firsts, including a concept to provide timing information on the critical FEL extraction efficiency, the first comparisons of photo injector drive laser phase and electron beam bunch length at the picosecond level using a synchroscan streak camera, and the first measurements of transit time and micropulse elongation versus injection phase with a streak camera.

While collaborating on the Boeing visible wavelength FEL oscillator, Alex was able to display the dynamics of an electron beam and an FEL through the optical synchrotron radiation, spontaneous emission radiation, and the FEL visible light itself. These proved critical in the commissioning of the oscillator and ring-resonator configurations and provided data used in qualifying the start-to-end simulations.

At Argonne, Alex adapted the dual sweep streak camera techniques to the three rings of the Advanced Photon Source and demonstrated these at the Advanced Light Source, the Stanford Synchrotron Radiation  Light source, PEP II at the SLAC National Accelerator Laboratory, and finally at the Duke University storage ring FEL oscillator. He performed the first z-dependent SASE-induced microbunching experiments on the Argonne SASE FEL, including gain lengths, spectral evolution, and saturation effects for wavelengths from 540-130 nm using coherent optical transition radiation. These were the first to demonstrate the exponential gain and saturation starting from noise in a large-scale FEL for the visible and vacuum ultraviolet wavelengths, providing confidence in the feasibility of subsequent x-ray SASE FEL projects such as the Linac Coherent Light Source at the SLAC National Accelerator Laboratory. He supported the commissioning and experiments on the FEL throughout this time and collaborated with Dr. Kwang-Je Kim of the APS Accelerator Systems Division.

More recently, Alex demonstrated the first near-field optical diffraction radiation imaging of electron beams at 7-GeV at the APS and proposed and collaborated on the tests at 4.5 GeV at the Thomas Jefferson National Accelerator Facility while at Fermilab. This technique has potential for use on energy recovery linacs, the x-ray FEL, and the APS-U injector as a non-intercepting beam-size monitor.

He has served on the International Free-electron Laser Scientific Program Committees and authored or co-authored more than 60 articles in the FEL proceedings through the last 30-plus years, and over 200 articles related to beam diagnostics.

“He has established a body of unique work over more than three decades,” Byrd wrote in his nomination letter, “which contributed to FEL technology and the visualization and understanding of the evolution of FEL-related physical processes. In addition to recognizing new FEL facilities and other milestones in FEL development, I believe it is important to recognize the critical work that occurs, often in the background, towards current facilities.”