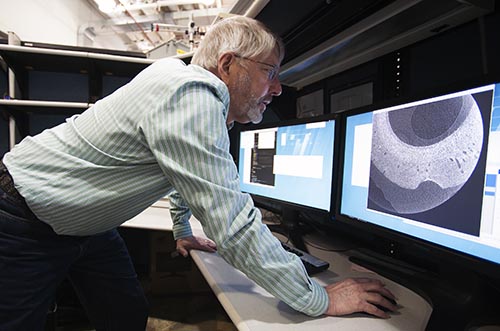 The original Argonne press release by Jo Napolitano can be read here.

The U.S. Department of Energy’s Advanced Photon Source (APS) at Argonne National Laboratory has facilitated tens of thousands of experiments across nearly every conceivable area of scientific research since it first saw light more than two decades ago.

But it wasn’t until earlier this year that the storied facility was used to study shark vertebrae in an experiment that one Northwestern University researcher hopes will shed light on the functionality of human bone and cartilage.

Shark spines constantly flex when they swim, said Stuart R. Stock, a materials scientist and faculty member of Northwestern’s Feinberg School of Medicine. Yet they remain surprisingly resilient throughout the fish’s lifetime, he said.

Stock is using the APS to better understand shark vertebrae’s formation and strength. He wants to know how the animal’s tissue develops and how it functions when the animal swims.

One of the ways he’s doing this is through high resolution, 3D X-ray imaging.

The information he obtains might one day help scientists develop better treatments for bone diseases such as osteoporosis.

“I believe there is a lot to learn here,” Stock said. ​“I’m excited about what I’m going to find.”

The laboratory is equally enthusiastic about his research.

“Our users provide challenging scientific problems that drive our instrument development, allowing us to constantly improve the beamline,” said APS physicist Francesco De Carlo. ​“Such collaborations are tremendously beneficial for both the scientists and the laboratory.” 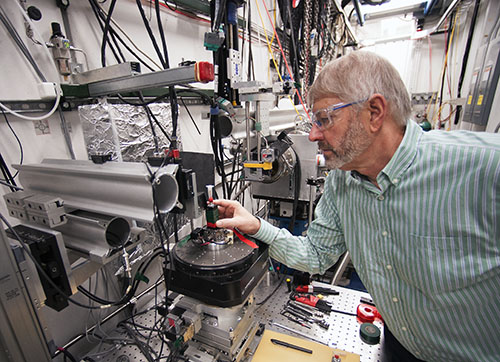 Argonne’s APS, which works like a giant X-ray, is a DOE Office of Science User Facility. It produces extremely bright, focused X-rays that peer through dense materials and illuminate matter at the molecular level. By way of comparison, the X-rays produced at today’s APS are up to one billion times brighter than the X-rays produced in a typical dentist office.

Stock called the APS a world-class facility, adding that the staff is exceptional.

“The people I work with there are incredibly helpful,” he said. ​“They stick with you through the entire process — from the initial experiment to publication — which makes the facility a stand-out among all others.”

Stock has spent his career working in the area of X-ray scattering and tomography, developing new techniques to study how bone mineral and bone-mineralized collagen respond to stress.

“Most of my work is actually in animal bones,” he said. ​“But animal bones behave much like human bones and are far easier to obtain and study.”

Stock, who started using the APS for the shark project earlier this summer, first became interested in the animal’s vertebrae three years ago after learning about a colleague’s experiment with the fish.

“It’s the kind of thing as a scientist where you find there is an area open to discovery, one that might prove analogous to research in humans,” he said.

Stock has been using X-ray imaging since the early 2000s: Two years ago, he used a different APS beamline to see inside an Egyptian mummy without disturbing its ancient wrapping. He found, among many other discoveries, a piece of calcite above the mummy’s abdomen.

Stock believes it might have been part of an ancient burial ritual. Similarly, Stock hopes the shark study will reveal unexpected and exciting results.

“I have a feeling we are going to learn something very crucial about how bones and cartilage form,” he said. ​“I think it’s going to open a window into understanding what bone and cartilage do.”

All of this information will help doctors better serve people with degenerative bone disease, he said, as current diagnosis and treatment methods are lacking.

“Right now, if we look at how we diagnose osteoporosis — a disease that will afflict most of the population, including men — we measure the amount of mineral in the bone by shining X-rays through the forearm,” Stock said. ​“But it’s not that great a predictor: If it were, it would be right 95 percent of the time and it’s not.”

Patients would be better served if doctors had a greater understanding of the 3D arrangement of the minerals within bones, he said. But even this has its limitations.

“We’re still missing something,” Stock said. ​“And every time we get new knowledge in this area, it will ultimately help us develop better replacement tissue, allowing more success clinically.”

Stock is collaborating with the Apex Predators Program, part of the National Oceanic and Atmospheric Administration. The shark spine samples were from sharks that died of natural causes.

No sharks – or researchers – were harmed in the making of this science. 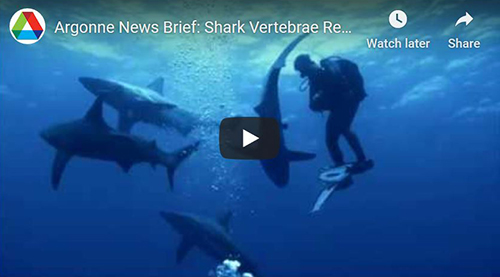 An Argonne News Brief Video can be seen here.