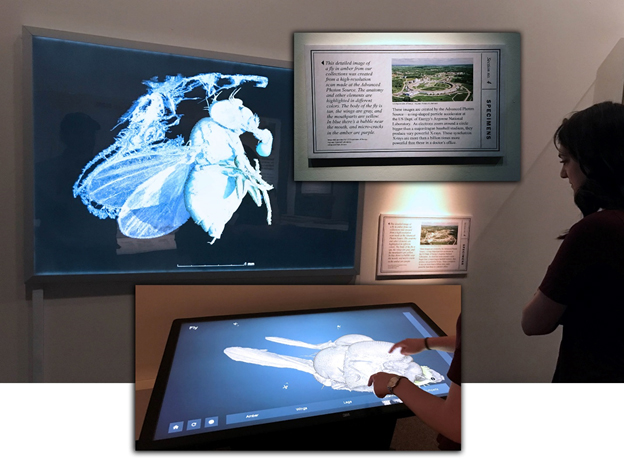 Results from research on the Tully monster and amber pieces carried out at the U.S. Department of Energy’s Advanced Photon Source (APS) are featured in a new exhibit in Chicago’s Field Museum of Natural History, “Specimens: Unlocking the Secrets of Life,” that opened on March 1, 2017, and runs through January 7, 2018.

The exhibit is described as “[A] journey into The Field Museum’s vast collections … From rare deep sea-dwelling creatures to fossil brains to meteorites, there are over 30 million specimens and artifacts tucked away on shelves, in bins and cabinets, jars, and acres of wooden drawers. They’re significant not only because of their number, but also because of the stories they tell. Scientists from around the world are using our collections every day to make discoveries, solve mysteries, and explore the wonder of the natural world. Together, these specimens weave a tapestry of life in our universe: what has been, what is, and what is still unknown. Join us on a quest to uncover the secrets these objects hold and to return to moments in time otherwise lost forever.”

The x-ray images of the Tully monster and amber inclusions were obtained at the X-ray Science Division 2-BM and 8-BM x-ray beamlines, under the auspices of Argonne physicist and beamline scientist Carmen Soriano. For more on this research, see “Solving the mystery of the Tully Monster” on the Argonne web site.

See also the March 9, 2017, Chicago Tribune story on the exhibit.