"All-nighters for Science": Around the Clock at the APS 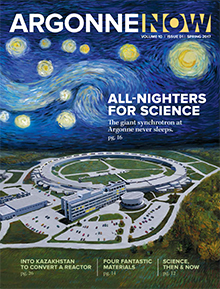 The article appears in the spring 2017 issue of Argonne Now, the Laboratory's science magazine.

Also featured in the spring 2017 issue is "A DRUG TO FIGHT HIV," one of the "Four examples of industry gaining an edge by using Argonne facilities."