The silk road leads to the APS 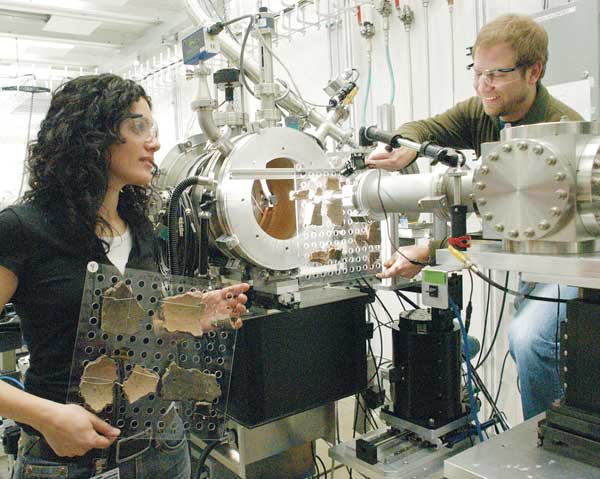 Lori Khatchadourian (University of Michigan) and Adam Smith (The University of Chicago) switch sample mounts at the ChemMatCARS 15-ID-D beamline. The samples are from one of Smith's excavations in Armenia and date to 1300 B.C. They were recovered from a shrine destroyed in a violent conflagration that ended occupation in the region for several hundred years. Smith's group is analyzing relics from northern China, the southern Urals, and the south Caucasus. These materials date to three distinct phases, from the early third millennium B.C. to the mid-first millennium B.C. The other team members, all from the University of Chicago, are Alan Greene, Charles Hartley, and David Peterson.

According to Smith, "Archaeologists, on the rare occasion when they have turned to the APS, have traditionally used it to describe a single remarkable 'treasure' in great depth. While this approach sheds much light on unique finds, it focuses attention on the extraordinary, singular find at the expense of the vast corpus of ordinary materials that make up most archaeological assemblages. Our group's goal is to determine the utility of APS analysis to examining large assemblages of mundane objects from different parts of the past. Eurasia-the vast continent that stretches from the Caucasus to China-is our geographic focus because, first, it is best know through archaeological methods; historical records from the Bronze and Iron Ages are rare. And second, the links between China, the Russian Steppe, and the Caucasus would later form the basis for the complex exchange networks know as the Silk Road. There was clearly an earlier material basis for these connections that we think is still visible in the artifacts of the three regions. But such connections will not be visible in the unique art historical treasures. They will only emerge from close analyses of everyday things." Contact: atsmith@uchicago.edu