The Chicago Tribune sees the “wonder” in APS 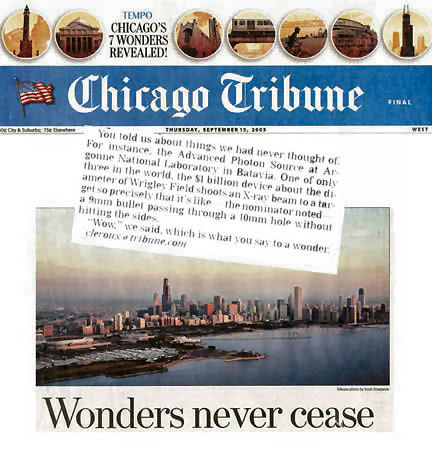 Ever wonder what the editors of the Chicago Tribune think of the Advanced Photon Source (APS)? Wonder no more.

True, the APS didn’t make the cut as one of the "official" "7 Wonders of Chicago" in a reader-survey contest recently staged by the newspaper. (All seven finalists happen to be located within Chicago city limits.) But the APS and its technologies were deemed worthy of singling out as a wonder nonetheless in the closing two paragraphs of the September 15, 2005, story on the contest in the paper’s Tempo section.

"You told us about things we had never thought of," wrote Tribune senior correspondent Charles Leroux. "For instance, the Advanced Photon Source at Argonne National Laboratory in Batavia [sic]. One of only three in the world, the $1 billion device about the diameter of Wrigley Field shoots an X-ray beam to a target so precisely that it's like — the nominator noted — a 9mm bullet passing through a 10mm hole without hitting the sides.

Geographic anomalies notwithstanding (the Tribune’s later editions correctly placed Argonne near Lemont), the APS thanks those who sent in nominations and the Tribune for their wisdom.