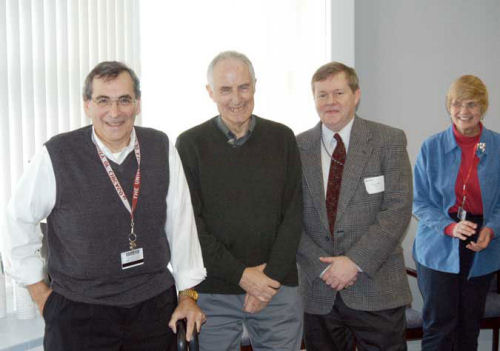 The International Union of Crystallography (IUCr) has announced that Professor Philip Coppens (Distinguished Professor, State University of New York at Buffalo) has been awarded the seventh Ewald Prize "for his contributions to developing the fields of electron density determination and the crystallography of molecular excited states, and for his contributions to the education and inspiration of young crystallographers as an enthusiastic teacher by participating in and organizing many courses and workshops."

Professor Coppens’ studies of excited molecules within a molecular crystal at were carried out at the ChemMatCARS sector 15 at Argonne National Laboratory’s Advanced Photon Source (APS). ChemMatCARS is a National Science Foundation/Department of Energy Office of Science (DOE-OS)-funded synchrotron resource for chemistry and materials science. The APS is funded by the DOE-OS, Office of Basic Energy Sciences.

“We are delighted that Phil has received this well-deserved honor for work partly done at the APS,” said APS Director Murray Gibson. “His pioneering of time-resolved studies of excited molecular states represents an important frontier for APS science.”

This work was the subject of the article by P. Coppens, T. Graber, P. J. Viccaro, Synchrotron Radiation News 16(4) 27 (2003) and was highlighted as “Capturing the Contortions of Excited Molecules” in the 2003 APS annual report, APS Science 2003.

The presentation of the Ewald Prize will be made during the Florence Congress Opening Ceremony on 23 August 2005.

The Prize, for outstanding contributions to the science of crystallography, consists of a medal, a certificate, and an award of USD $30,000. It is presented once every three years during the triennial International Congresses of Crystallography. (See: http://www.iucr.org/iucr-top/iucr/Ewald.html)

According to Professor Coppens’ Web site, "Our work includes the development of new methods for the study of solids by X-ray diffraction and spectroscopy, including the use of very high intensity sources and liquid-helium temperature equipment. Some of our experiments are performed at the Advanced Photon Source at Argonne National Laboratory. We use light excitation at low temperatures to study the nature of short-lived species, using both conventional and synchrotron radiation."

"The ability to perform time-resolved experiments on very short-lived species at pulsed X-ray sources opens the possibility to follow chemical changes in real time. We have done the first experiments ever in which the three dimensional structure of an excited state of a Cu(I) metallo-organic complex with 60 µs lifetime has been determined at atomic resolution. We have also measured laser-induced NO linkage isomerism of transition metal nitrosyl complexes, including Ru and Fe porphyrins."

"The use of X-ray diffraction in the mapping of electron densities sheds new light on the chemical bonding in molecules and the properties of crystalline materials. The electron density directly gives information on the nature of chemical bonding, and is increasingly important for understanding of solids. Recently, we have focused attention on the derivation of the electrostatic potential and other electrostatic properties, such as dipole and quadrupole moments, directly from the X-ray data. The electrostatic properties are of importance in, for example, chemical reactivity, and in the folding of biological macromolecules, in which Coulombic interactions play an important role."

"In summary, the work in our team combines crystallography, synthesis, theoretical chemistry, and spectroscopy in a comprehensive approach to chemical research."

The nation's first national laboratory, Argonne National Laboratory conducts basic and applied scientific research across a wide spectrum of disciplines, ranging from high-energy physics to climatology and biotechnology. Since 1990, Argonne has worked with more than 600 companies and numerous federal agencies and other organizations to help advance America's scientific leadership and prepare the nation for the future. Argonne is operated by the University of Chicago for the U.S. Department of Energy's Office of Science.