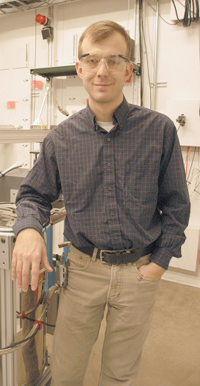 Peter Chupas of the Argonne X-ray Science Division (XSD) Chemistry, Environmental, and Polymer Science Group has been named the 2006 recipient of the Sidhu Award, given each year by the Pittsburgh Diffraction Society “for the best contribution to crystallography or diffraction by an investigator within five years of the Ph.D.” Chupas was recognized for his work on studies leading to the development of a new method for rapid collection of pair-distribution-function (PDF) data. This is now the method of choice for PDF measurements and forms the basis of the U.S.’s first and only dedicated pair-distribution-function beamline, 11-ID-B at the Advanced Photon Source, for which Peter is the beamline scientist.

The Sidhu awardee receives $500 and a certificate.  A condition of the Award requires the recipient to deliver the Sidhu Award Lecture at the Pittsburgh Diffraction Conference, held each year at Duquesne University in Pittsburgh, PA, which Chupas did this past October.

The Sidhu Award is made in memory of Professor Surhain Sidhu, who was a founding member of the Pittsburgh Diffraction Conference.  At the time (1942), he was Professor of Physics and Director of the X-ray Laboratory at the University of Pittsburgh.  Later, he moved to Argonne National Laboratory, where he pioneered the use of the null matrix in neutron diffraction.  This involves choosing isotopes of an element in the proportion that gives a zero net coherent scattering factor.  The procedure has been widely used for studying biological materials in which the isotopic ratio of H to D is appropriately adjusted.

Past winners of the Sidhu Award include Qun Shen (1988) and Jin Wang (1994). Both are now group leaders in XSD, Shen for the X-ray Microscopy and Imaging Group and Wang for the Time Resolved Research Group.