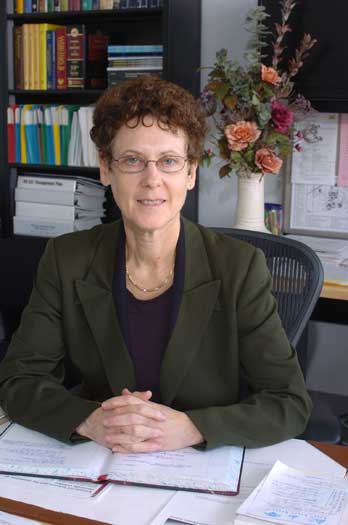 Dr. Gabrielle Long, Associate Director for the ANL Experimental Facilities Division, has been named a Fellow of the American Association for the Advancement of Science (AAAS). In notifying Long of her election, the AAAS noted, "Each year the Council elects members whose 'efforts on behalf of the advancement of science or its applications are scientifically or socially distinguished.'  The honor of being elected a Fellow of AAAS began in 1874 and is acknowledged with a certificate and a rosette.

”You are being honored for outstanding leadership in the development and application of advanced X-ray and neutron measurement techniques for materials analysis."

Long is responsible for the growing number of research sectors (pairs of x-ray beamlines) that are now managed by the Advanced Photon Source. Efim Gluskin, Director of the Experimental Facilities Division, said, “Gabrielle joined the APS management team at a very exciting and challenging time, when new strategic initiatives for future APS science are being explored. She brings to the APS the wide-ranging experience in science and the excellent organizational skills that are needed to open new technical and scientific horizons for our user community.”

Prior to coming to ANL, Long was Acting Chief of the Ceramics Division and Leader of the Materials Microstructural Characterization Group in the Materials Science and Engineering Laboratory at the National Institute of Standards and Technology (NIST). She received her Ph.D. from the Polytechnic Institute of Brooklyn (now Polytechnic University) in 1972 and she served in research and teaching positions in physics at Columbia University, Vassar College, and the State University of New York at Stony Brook before coming to the National Bureau of Standards (now NIST) in 1980.

Long’s research interests include microstructure characterization of ceramics, nanoscale materials, and plasma-sprayed coatings and free standing structures. She has long-standing interests in materials deformation, small-angle scattering and x-ray optics, x-ray inelastic scattering, anomalous scattering, and dynamical diffraction by imperfect (real) crystals. She is a Fellow of the American Physical Society and her work has been recognized by numerous awards. She was the Maria Goeppert-Mayer Distinguished Scholar at ANL in 2001-2002. Long has co-authored over 115 papers and has served as lead editor of a volume on synchrotron radiation instrumentation.

She conceived, built, commissioned, and operated unique national facilities at the National Synchrotron Light Source and the APS that enable the atomic, molecular, microstructural, interfacial, and surface characterization of materials at levels previously unattainable and she has been a leader in the use of these facilities to resolve important issues in materials science.