Bio-CAT Research Selected as "Breakthrough" for 2004 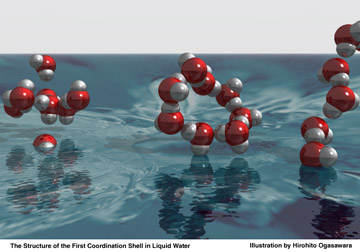 Water may be the most important molecule on Earth, but our understanding of its properties is embarrassingly limited. In solid ice form, water takes on numerous phases and structures that can be studied by means of diffraction techniques. As a liquid, however, water poses a frustrating structural puzzle because of the complex hydrogen bonding that forms a disordered network. Recently, researchers from the Stanford Synchrotron Radiation Laboratory, the BESSY Laboratory, Stockholm University, Linkping University, and Utrecht University have used the APS to obtain detailed information about the nearest neighbor coordination geometry in liquid water.

Previous experimental efforts to understand water structure have relied on several methods including infrared spectroscopy and neutron and x-ray diffraction. Unfortunately, the structural information provided by infrared spectra is ambiguous for water, and diffraction provides only radial distribution functions that do not allow unique assignment of local hydrogen bonding configurations. In the work reported by Wernet et al., x-ray absorption spectroscopy (XAS) and x-ray Raman spectroscopy (XRS) were used to investigate local bonding in the first coordination shell of water. In XAS, x-rays are absorbed by core electrons close to the nucleus of the oxygen atoms in water; in XRS, the x-ray photons are inelastically scattered by the oxygen atoms. Both processes are highly sensitive to the hydrogen bonds formed by the water molecules. The XRS data were collected at the Bio-CAT18-ID beamline at the APS; the XAS measurements were carried out at the Advanced Light Source, Lawrence Berkeley National Laboratory. The researchers found that the hydrogen bonding of liquid water was very similar to that seen in the surface layers of ice but very different from the bonding observed in bulk ice, in which water molecules are tetrahedrally coordinated. This new finding indicates that, contrary to the conclusions of earlier work, bulk water is not predominantly four-fold coordinated. Instead, it appears that the x-ray spectroscopy results are consistent with quantum chemical models in which the water molecules form two hydrogen bonds with their neighbors. In this case, liquid water appears to consist of structures made of chains and rings, which are, in turn, weakly hydrogen-bonded to other chains and rings. Members of the research group believe that the work will be controversial because many computer simulations over the last 10 years tell a very different story. Because computer power has increased rapidly and experimental techniques have been more difficult to develop, the simulations have outpaced the empirical data. Based on the recent models, many scientists have concluded that, in changing from ice to liquid, water molecules maintain their four-fold tetrahedral network structure, but the liquid acquires more defects and disorder in the form of different bond lengths and bond angles. The new x-ray spectroscopy data discussed here do not support this conclusion, however, yielding a two-fold bonding picture instead. The debate on the structural picture will likely continue, but these new data show the importance of third-generation facilities such as the APS synchrotron. Core excitation spectroscopies—especially XRS, which can only be done at the newest x-ray sources—are vital to understanding the local structure of a complex system such as water. — David Voss