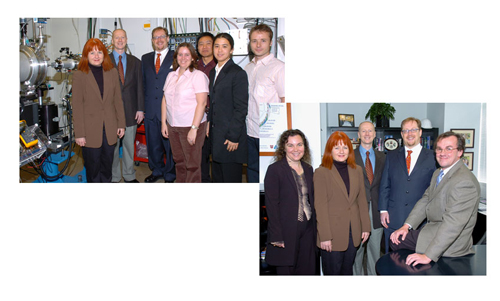 The Honourable David J E Glass, Australian Consul-General in Chicago, and Deputy Consul-General Melissa Stenfors paid a call to the ChemMatCARS beamlines at sector 15 of the APS, where they were given a briefing and tour by beamline scientist and fellow Australian David Cookson, followed by a meeting with APS Director Murray Gibson.

The Consul-General's interest in the APS extends beyond intellectual curiosity. The Australian Synchrotron Research Program (ASRP)—a scientific collaboration between a large number of institutions in Australia and the United States—is a strong presence at several APS sectors, including ChemMatCARS and BioCARS, which are operated by The University of Chicago, and X-ray Operations and Research (XOR) sectors, which are funded by the Office of Basic Energy Sciences in the DOE. Australia is building their own 3-GeV, third-generation light source facility, Boomerang, in Melbourne, to be completed in 2007. (Another APS connection: Gopal Shenoy, XFD, is on the International Scientific Advisory Committee for the Australian machine.)   So light-source science is becoming a subject of widespread interest in Australia.

Joining Cookson in welcoming the distinguished visitors were Cathy Harland, a staff scientist with ASRP who is working with XOR; Harry Tong (also ASRP), a staff scientist with BioCARS at APS sector 14; Karena Chapman, a Ph.D. student from the University of Sydney who is an ASRP intern at ChemMatCARS; Bernt Johannessen, a Ph.D. student from the Australian National University, also an ASRP intern at ChemMatCARS; Stephen Milton (APS/XFD), Project Director for the Linac Coherent Light Source work at ANL the APS and chair of the International Machine Advisory Committee for the Australian Synchrotron Project, and Sandra Biedron, co-author with Cookson on the ASRP pilot internship program proposal that was successfully funded this year and supports the internships of Chapman and Johannessen.

The ASRP program began in 1992, when Cookson and some colleagues ran a beamline at the KEK light source in Japan. Since then, researchers supported by ASRP have carried out hundreds of experiments at light sources around the world, including the APS. The ASRP intern program that funds Chapman and Johannessen's three-month stay at the APS is a natural addition to the existing ASRP fellowship program which currently supports post-doctoral fellows from all over Australia. Together, the two ASRP programs are developing highly skilled generations of researchers and beamline scientists who will build and use the Australian source, while the machine advisory committee headed by the APS's Milton, assures a solid foundation of accelerator scientists for the newest member of the light source community.

"Thanks to the steady support from Australian universities, institutes and the Australian government, ASRP has been able to build an Australian user community essentially from scratch," said Cookson.