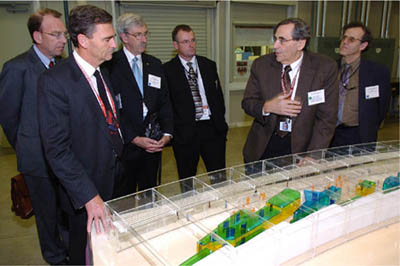 A high-level Australian delegation led by the State of Victoria’s Treasurer and Innovation Minister John Brumby recently visited the Advanced Photon Source (APS) to enhance the delegation's understanding of the benefits of synchrotron science. The Australian Synchrotron Project, one of Australia’s biggest investments in R&D architecture, will start operations in 2007. New Zealand, which is also investing in the Australian Synchrotron, was represented in the tour by New Zealand’s ambassador to the United States and a federal minister.

Robert Rosner, Argonne director, welcomed Brumby and the delegation by saying scientific knowledge knows no boundaries and scientists across the world operate on the principle of passion, a principle that leads to great innovations.

Brumby said the range of the research performed at the APS demonstrates the immense potential of Australia’s own synchrotron, and he expressed his gratitude for the support and assistance provided by the APS for the Australian synchrotron.

The APS and the Australian Synchrotron signed a Memorandum of Understanding on scientific collaboration in 2005 to enable researchers at both facilities to exchange ideas and explore new experimental technology. Brumby said he looks forward “to ongoing exchange between our two synchrotrons and to explore linkages with the Center for Nanoscale Materials.”