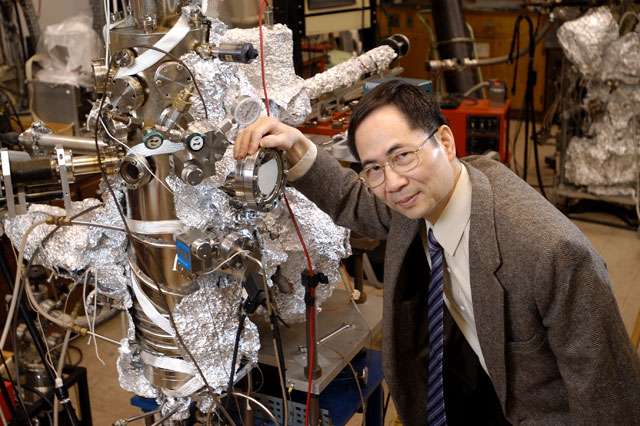 Prof. Tai-Chang Chiang of the University of Illinois at Urbana-Champaign and a long-time user of the U.S. Department of Energy’s Advanced Photon Source is a co-recipient of the 2015 Davisson-Germer Prize in Atomic or Surface Physics sponsored by the Division of Atomic, Molecular and Optical Physics of the American Physical Society.

Prof. Chiang was cited “for his elegant demonstration of multiple quantum well resonances in metallic thin films achieved by growing films of unprecedented uniformity, and his demonstration and use of quantum effects to understand and control the stability of thin films.” Chiang received a B.S. in physics from the National Taiwan University and a Ph.D. in physics from the University of California-Berkeley. He joined the Department of Physics at the University of Illinois at Urbana-Champaign in 1980 after working for two years as a postdoctoral fellow at the IBM T.J. Watson Research Center in Yorktown Heights, NY. He held a guest appointment as Scientific Director of the Synchrotron Radiation Center at the University of Wisconsin-Madison from 2010 to 2014. Prior to that, he served as Frederick Seitz Materials Research Laboratory's Associate Director from 1999 to 2006. He is a fellow of the American Physical Society, an outstanding referee for the American Physical Society journals, and a recipient of the National Science Foundation Presidential Young Investigator Award. His research in recent years has been focused on the electronic, spin, lattice, and phonon structures of solids, surfaces, and thin film systems.

Much of his experimental work has been performed using synchrotron radiation at the Advanced Photon Source at Argonne National Laboratory, the Advanced Light Source at Lawrence Berkeley National Laboratory, and the Synchrotron Radiation Center. His work at the Advanced Photon Source alone — dating back to 1999 and primarily at X-ray Science Division beamline 33-ID — has resulted in 36 peer-reviewed articles on which is he is a co-author.

The Davisson-Germer Prize was established to recognize and encourage outstanding work in atomic physics or surface physics. The prize consists of $5,000 and a certificate citing the contributions made by the recipient or recipients.