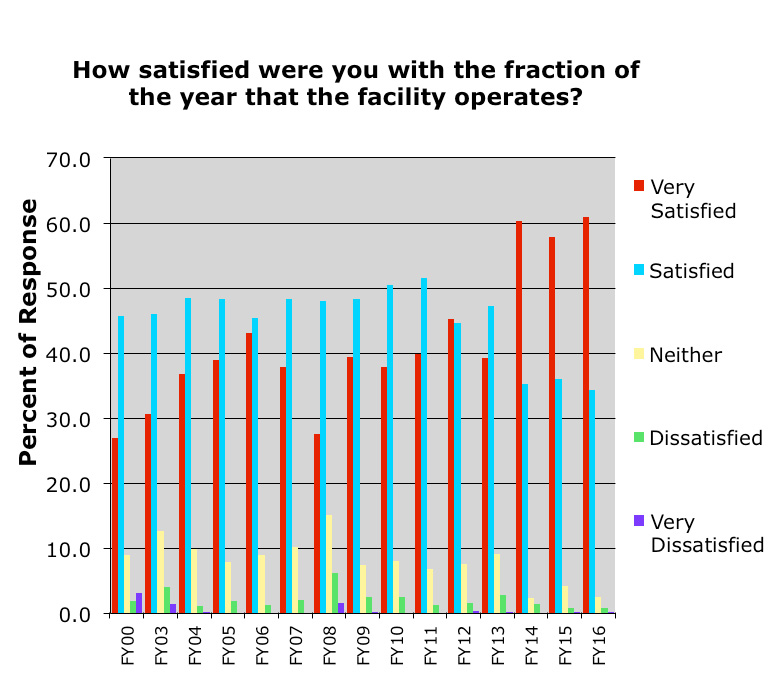 At the end of every fiscal year, the APS User Office sends a questionnaire and survey to those that have used the APS in the past year. The questions are provided to us by DOE Basic Energy Sciences (BES), although on occasion we have included additional questions. This is a great opportunity for the user community to provide feedback to the APS management and BES on APS operations and beamline staff. In fiscal year 2016, over 600 users filled out the survey, about 80% of these being general users or partner users with the remainder coming from CAT members and resident beamline staff. We have been using the survey for 16 years and so have enough data to observe trends. Below is a histogram of responses for the question “How satisfied were you with the fraction of the year that the facility operates?” over the last 16 years.

The general trend for those who were “Very Satisfied” has been increasing;, the notable exception is in FY08 when we had to reduce the number of operation hours due to budget constraints.

To me, even more impressive is the very positive response to the question “How satisfied were you with the support for users provided by the beamline staff?”. For FY16 nearly 80% of the responses were in the “Very Satisfied” category.

Respondees are also permitted to include comments and this year there were well over 500 recorded. Although some comments provided opportunities for improvement (better meal options, fewer training requirements, etc.), by far a majority were very positive, in particular those praising the beamline staff. There were many call-outs for exceptional beamline operations, and in some cases specific staff, for their outstanding service in interacting and supporting users.

There are many comments I could include in this, but I found one that I was particularly happy to read; “Thank you for letting me use this amazing facility and for the great beamline staff that were tremendously helpful and so committed.”