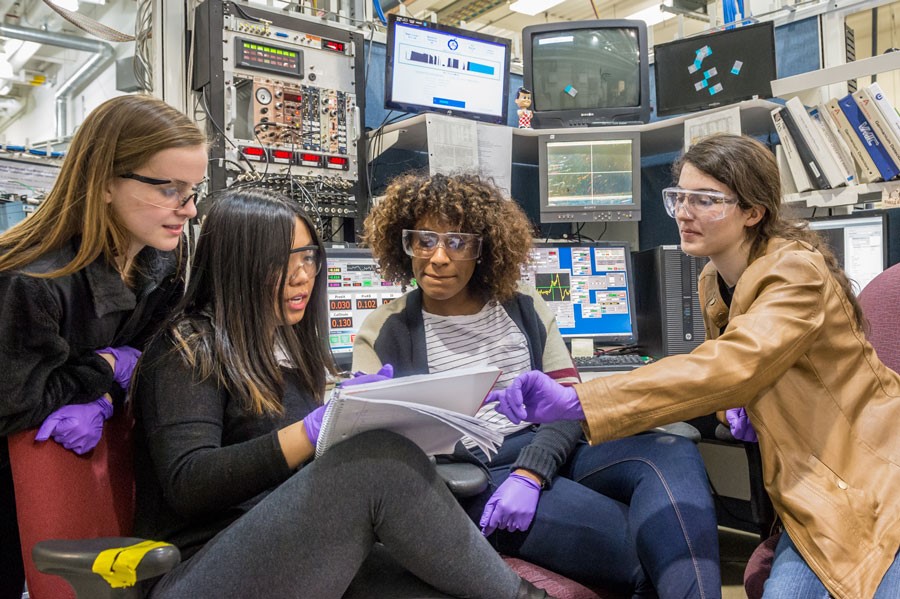 The experimental facilities of a typical high school physics classroom don't usually include a synchrotron. Precious few high school science students have ever even seen a particle accelerator. But Natalie Ferguson and four of her schoolmates not only got to see the Advanced Photon Source at the U.S. Department of Energy's (DOE's) Argonne National Laboratory, but they used it to do research.

Natalie's group from Neuqua Valley High School in nearby Naperville was part of Argonne's Exemplary Student Research Program (ESRP). For the past five years, the ESRP has given local high school juniors and seniors the chance to do authentic science at the Advanced Photon Source (APS), a DOE Office of Science User Facility.

"It was a really cool experience," Natalie said. "I was in the hutch inside Argonne National Laboratory conducting research! Nobody was holding my hand. And that was really cool."

Working with their teacher, a scientist-mentor and an Argonne beamline scientist, the students identify a research question, design an experiment, collect and analyze data and present their results to Argonne's community of users. This year, ten teams with a total of 70 students and 10 teachers participated at beamlines 2, 8, 20 and 26.

The Neuqua Valley team's experience began with Mahalingam Balasubramanian, an Argonne physicist with the APS X-ray Science Division who helps maintain and operate the Sector 20 beamlines in addition to doing his own research in the field of energy science.

Mali, as everyone calls him, has mentored ESRP students for the past four years. "I consider this an important thing to do," he said. "It's important to give them the exposure so that they get interested in science."

Mali's group came with their teacher, Daria Prawlocki, who teaches physics and Advanced Placement environmental science at Neuqua Valley and has brought several groups to the APS, and Tammie Gerke, a lecturer in geology and environmental earth science at Miami University in Middletown, Ohio, with whom Mali has a years-long working relationship.

Mali thought that one of Gerke's projects might be an ideal way for high school students to dip a toe into the use of x-rays at synchrotrons. Gerke is analyzing samples of pottery from Wickliffe Mounds, an archeological site in Kentucky dating to between 800 and 1600 AD.

The idea is to use the x-ray beam to characterize the chemical composition and crystal structure of pigments used on the pots so that they can be compared to pottery from other sites. This will give insight into manufacturing techniques, and similarities between the pigments would support the idea that there was trade and sharing of technical information between settlements in the region.

"I thought, Wow, this might be a nice way that the students can both do a little bit of science and learn a little bit of old American history," Mali said. "I asked Tammie if she was interested and she said, 'This is a great idea. Let's do it!'" Gerke gave the students background material on the kind of work they'd be doing. "I'd never looked at that level of scientific research before," said Natalie Ferguson. "I knew the basics, but I hadn't done the nitty gritty research of, 'Whoa…This is a big science word: Gotta figure out what that means.'" After a lot of preparatory work, the students wrote a proposal outlining their research and asking for beam time, just as any prospective APS user would do.

Gerke provided samples of the pigments and met the student group at the synchrotron to take data. For all but Natalie it was the first time at the lab. "Argonne is so close to us but very few students actually know what's going on there," said Daria Prawlocki, their teacher. "When they get there and realize the magnitude of the science that's happening and the size of the equipment, I think they're really stunned. It's like something out of a movie. I think it's sensory overload for them."

Orientation was also an opportunity for the students to talk to other people working in their sector. "Most of these kids know they want to be science majors, but they're not sure what all is out there for them," Prawlocki said. "So it's neat to see them ask questions of these scientists about how they got to where they are and to see all the opportunities that are there for them."

"Everyone at Argonne is always kind to the students," she added. "I think they enjoy being around the students as much as we enjoy seeing what they're doing."

Mali coached each student for a turn mounting a sample and moving it around remotely in the beam. "Mali was super-amazing at explaining the 'why' behind things," said Natalie Ferguson. "He told me what to do, but then he just stepped back and let me do it."

One student kept track of the time, and the others watched as the data came in and displayed on a computer screen located outside the experimental station, where the experiment is performed. The students were surprised by how long it took to analyze paint samples no bigger than a fingernail, their teacher said. "I think it helped them appreciate the scientific process." That is certainly Mali's hope. "We wanted the students to get a feel for what big science is all about," he said. "That science involves teamwork; it involves interdisciplinary activity at times."

The day at the APS was only one step on a long road. Now, with help from Gerke, the students have to analyze the data they collected. "They realize that the scientific methodology requires one to hypothesize and then go test the hypothesis, do the work required to analyze the data and come up with some sort of a conclusion," said Mali. "They will go through that process now. As they start analyzing the data they'll probably understand more of what these experiments really mean."

But for the adults who worked with the Neuqua team, the experience was about something more visceral than understanding the science. "While some things might appear quite difficult or overwhelming, they can be done if you just start doing it," Mali said. "That's something I hope they learned."

Said Tammie Gerke, "It's great for them to see that there are people that do science because we really like it." And besides, she added, "It was a wonderful experience. Even if they only got a passing taste of what doing science is like, or what using the synchrotron is like, that's an opportunity that hardly anyone ever gets." The Neuqua Valley High School team and the other ESRP groups presented their work at the Joint APS/CNM Users Meeting evening poster session in May.