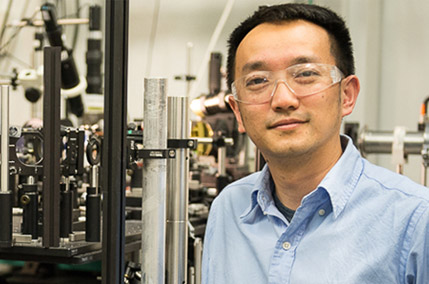 X-ray physicist Haidan Wen (X-ray Science Division, XSD) of the U.S. Department of Energy’s (DOE's) Advanced Photon Source (APS) at  Argonne National Laboratory has received a DOE Early Career Award, a prestigious research grant for $2.5 million over five years. The effort, now in its seventh year, is designed to bolster the nation’s scientific workforce by providing support to exceptional researchers during the crucial early career years, when many scientists do their most formative work, the DOE said. “We invest in promising young researchers early in their careers to support lifelong discovery science to fuel the nation’s innovation system,” said Cherry Murray, director of DOE’s Office of Science. “We are proud of the accomplishments these young scientists already have made, and look forward to following their achievements in years to come.”

The grant will fund Wen’s research to develop a new imaging technique to catch dynamic snapshots of materials as they’re changing and performing unusual phenomena, using x-rays at the APS, a DOE Office of Science User Facility. Certain materials display rare and useful properties, such as high-temperature superconductivity: conducting electricity perfectly with no loss over time. We don’t know exactly how these systems work. The physics of systems in equilibrium—static, with no net energy flowing through the system—have been extensively studied and better understood; but there’s a gap in our knowledge when the systems are out of equilibrium. Wen plans to study such non-equilibrium systems at the mesoscopic scale, on the order of about a thousandth the width of a human hair, to understand how parts with distinctive properties interact with each other in materials. This could help researchers shed light on complex energy conversion and transport processes and provide opportunities for new energy technologies such as low-power electronics.

“The proposed new platform at the APS will combine multiple microscopic imaging methods to allow us to look at the same problem simultaneously,” Wen said. “Imaging at the relevant length and time scales gives us the power to unravel non-equilibrium mesoscopic phenomena by correlating electronic and structural properties of a material in real time.” “It is a testament to Haidan’s research in materials physics that the Department of Energy is recognizing its excellence with this award,” said Associate Laboratory Director Stephen Streiffer, who leads Argonne’s photon sciences directorate. “X-ray imaging is one of the foundational techniques for the future of synchrotron x-ray science, and the directions that Haidan has proposed to explore hold great promise for revolutionary advances in our understanding of heterogeneous materials,” he said.

Wen  received his B.S. at the University of Science and Technology of China and Ph.D. at the University of Michigan, Ann Arbor, where he studied the dynamics of electron wave packets using ultrafast lasers. He worked at SLAC National Accelerator Laboratory studying the intrinsic properties of materials on ultrafast time scales before coming to Argonne in 2010. “Haidan is an incredibly hardworking and creative young scientist who has already established wide recognition for his outstanding abilities—especially impressive for someone at such an early stage of their career—and we’re thrilled to see this recognition for him,” said Argonne physicist Alec Sandy, who leads Wen’s group.

“This is very exciting news and I’d like to acknowledge my collaborators, both in the X-ray Sciences and Materials Science divisions and at the Center for Nanoscale Materials,” Wen said. “It’s truly a collective effort—the ideas accumulated over many discussions with many people.”

The original Argonne press release by Louise Lerner can be read here.