The First Observation of Near-Room-Temperature Superconductivity 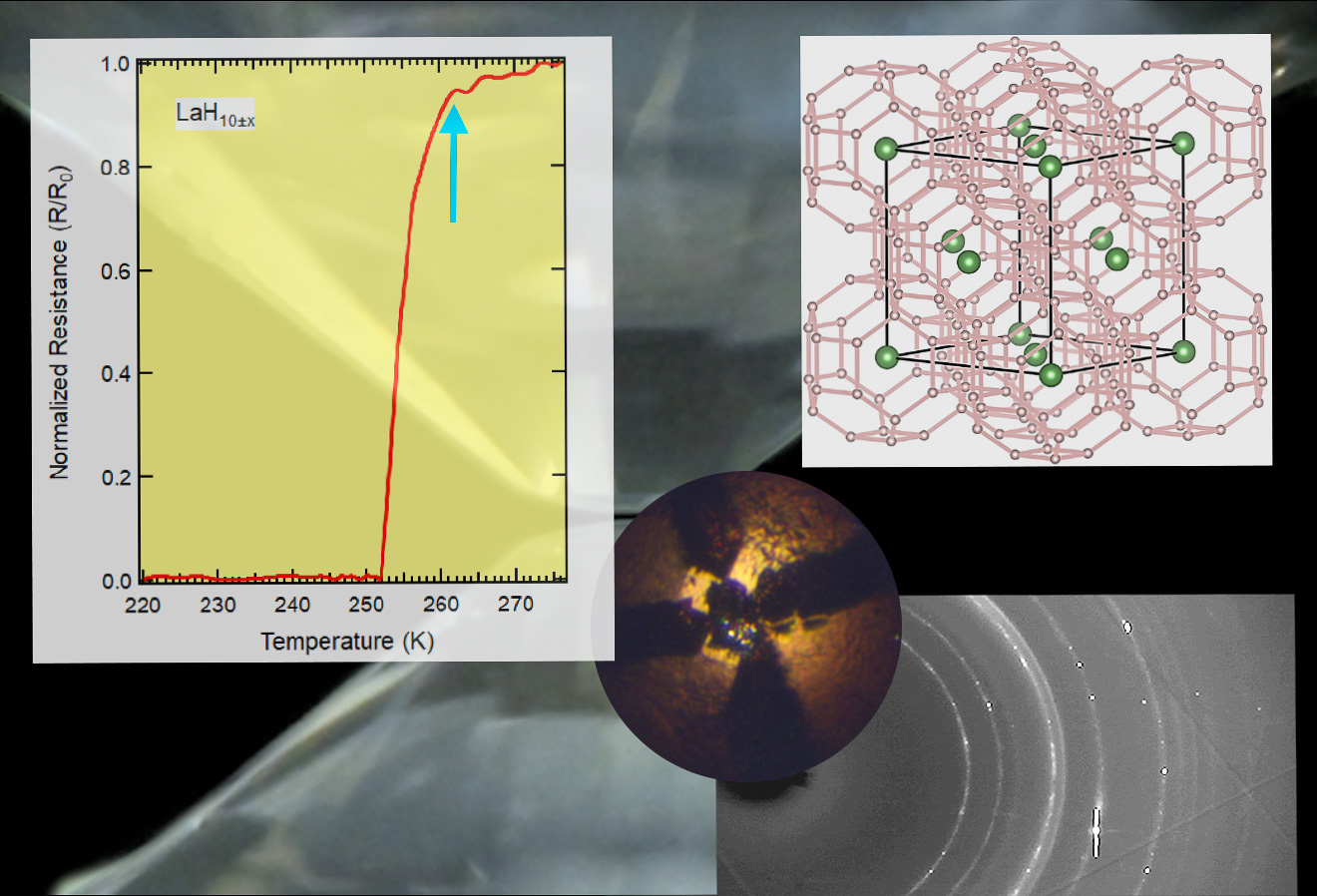 For decades, room-temperature superconductivity has been one of physics' ultimate goals, a Holy Grail-like objective that seems to keep drifting within realization yet always stubbornly out of reach.  Various materials, theories, and techniques have been proposed and explored in search of this objective, but its realization has remained elusive.  Yet recent experimental work on hydrogen-rich materials at high pressures is finally opening the pathway to  practical superconductivity and its vast potential.  Russell Hemley, a materials chemist at George Washington University in Washington, D.C., first announced evidence of superconductivity at 260 K in May, 2018, and then hints of an even higher 280 K transition in August of that year. Now Hemley, along with a team of researchers from The George Washington University and the Carnegie Institution for Science synthesized several lanthanum superhydride materials that demonstrated the first experimental evidence of superconductivity at near room temperature, and with colleagues from Argonne National Laboratory characterized them at the U.S. Department of Energy’s Advanced Photon Source (APS).

One of the major experimental challenges in the study of these materials under high pressures is the extreme difficulty of creating and properly characterizing them in the laboratory.  The research team in this study have developed new techniques to deal with these problems, using in situ four-probe measurements and x-ray diffraction to measure electrical conductivity in diamond anvil cells.

Modulated, pulsed laser heating was utilized to react lanthanum metal with hydrogen at megabar pressures (nearly 2 million ATM) to synthesize the samples.  These synthesis and characterization x-ray diffraction studies were performed at the High Pressure Collaborative Access Team (HP-CAT) 16-ID-B of beamline of the APS (the APS is an Office of Science user facility at Argonne).  The authors note that these new experiments bring to focus the synergy of laboratory techniques with on-line, in situ synchrotron x-ray techniques that provided the necessary confirmation of the phase responsible for the near room temperature superconductivity in this system.

The team created several types of superhydride materials with pulsed laser heating, using both ammonia borane and pure hydrogen as a source of hydrogen.  Cubic LaH10±x was synthesized at pressures above 180 GPa. Along with the x-ray diffraction studies, electrical conductivity measurements were performed in situ at pressures up to 200 GPa, with resistance being measured as a function of temperature.  The researchers observed a sharp drop in electrical resistance of the first sample occurring around 275 K, then remaining near-zero below 255 K.  In subsequent experiments, resistivity transitions starting as high as 280 K were observed.  The current-voltage characteristics and the effect of applied current on the transition temperature were also measured. This showed the material has a large critical current in the superconducting phase.  X-ray diffraction measurements as a function of temperature through the region of the transition showed no evidence for major structural changes associated with the transition, in agreement with their predictions for LaH10.

In addition to the important observations of superconductivity at temperatures above 260 K, the work highlights the importance of synchrotron x-ray diffraction as a critical tool for these experiments and for extreme conditions materials science in general, and the crucial role played by the APS in this effort.  For example, in the most recent set of experiments, electrical transport as a function of temperature was measured "in situ" in a cryostat on the HP-CAT beamline.  The experiments also made use of the high-pressure support labs managed by the EFree EFRC located at the APS. The authors note that it is crucial to have x-ray (e.g., synchrotron) characterization of the very sample exhibiting the superconductivity.  Thus, down the road they see the need for multiple complementary probes to be brought to bear on the same, well characterized samples.  Such multifaceted characterization will be essential for understanding its precise mechanisms.

Others are confirming these results with additional reports of diamagnetic signatures of superconductivity.  Hand in hand with advancing extreme conditions experimental techniques is the increasing accuracy of theoretical and simulation methods that guide these experiments.  These methods, in concert with the critical role of large-scale advanced synchrotron x-ray sources such as the APS, will ultimately lead to the structural control needed to synthesize these materials for practical applications, and to the revolutionary technologies that will follow.  — Mark Wolverton

This research was supported by EFree, an Energy Frontier Research Center funded by the U.S. Department of Energy (DOE) Office of Science-Basic Energy Sciences (BES), under Award No. DE-SC0001057. The instrumentation and facilities used were supported by DOE-BES (DE-FG02-99ER45775, VVS), the U.S. DOE/National Nuclear Security Administration (DE-NA-0002006, CDAC; and DE-NA0001974, HP-CAT), and the National Science Foundation (DMR-1809783). This research used resources of the Advanced Photon Source, a U.S. Department of Energy (DOE) Office of Science User Facility operated for the DOE Office of Science by Argonne National Laboratory under Contract No. DE-AC02-06CH11357.