Focusing in on Xianbo Shi, optics specialist for the APS Upgrade 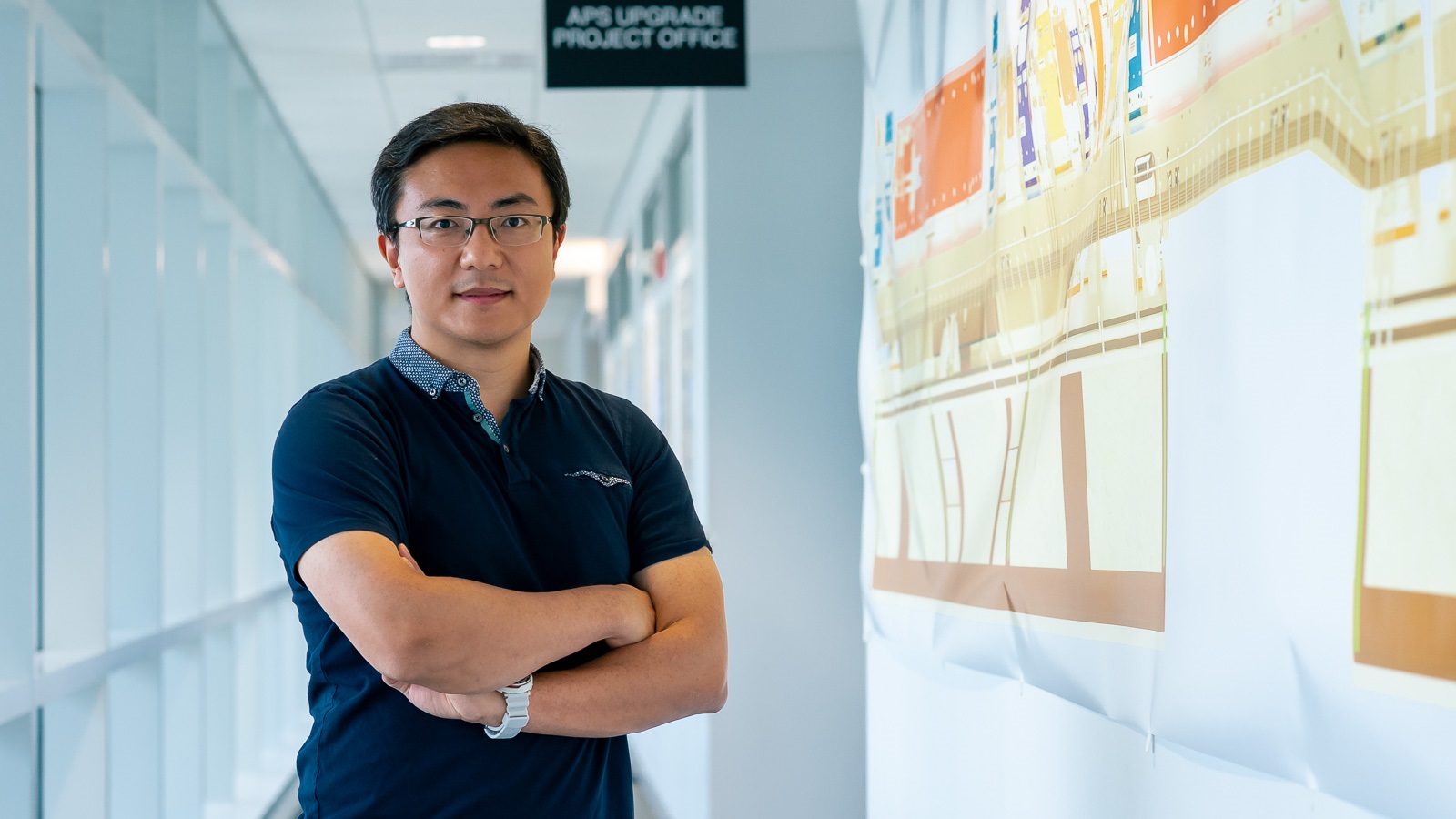 To hear Xianbo Shi tell it, there is no substitute for on-the-job training in the field of X-ray optics.

There is no particular educational track, he says, that will teach you how to design the complex series of synchrotron beamline optics (mirrors, lenses, monochromators, etc.) that manipulate powerful X-ray beams for scientific purposes. If you want to learn, you have to put down the books and go work at an X-ray facility.

That’s why, after obtaining his Ph.D. in physical chemistry in 2009 at Queens College, part of the City University of New York, Shi interned at the U.S. Department of Energy’s (DOE) Brookhaven National Laboratory for eight months, helping to build the National Synchrotron Light Source II (NSLS-II), a DOE Office of Science User Facility.

“I was teaching, working three days a week, and driving 55 miles to Brookhaven,” he said. “I was on the beamline team, learning all about optics and helping to design the beamlines.”

The effort paid off. Brookhaven was so impressed with Shi that they hired him as a postdoc to work on the design of NSLS-II’s X-ray Powder Diffraction Beamline. Following that, Shi spent another year developing X-ray optics at the European Synchrotron Radiation Facility. And in 2013, when the team behind a planned upgrade of the Advanced Photon Source (APS), a DOE Office of Science User Facility at DOE’s Argonne National Laboratory, was looking for an accomplished optics specialist, they chose Shi.

Now Shi, a physicist in Argonne’s X-ray Science Division, is at the forefront of the effort to design new, state-of-the-art optics for the APS Upgrade project. When it’s completed, the upgraded APS will generate X-ray beams that are up to 500 times brighter than those of the current facility. It’s Shi’s job to make sure those beams can be focused down to extremely small sizes and manipulated for different scientific purposes.

This means designing mirrors, lenses and other optical elements that change and shape the ultrabright X-ray light of the APS. And since the upgraded APS will create light that is so much brighter, the optics currently in use won’t get the job done. Nine new feature beamlines will be built and 15 existing beamlines will be updated as part of the APS Upgrade, each one intended to take full advantage of the new facility’s capabilities, and Shi is helping design optics for most of them.

“Each beamline has specific optics requirements, so I am working with the beamline staff,” Shi said. “We have to select the optics they need, optimize the optical layout and then refine their specifications.”

For Shi, that meant starting from scratch, in more ways than one. Since the APS Upgrade is a state-of-the-art effort, some of the older methods of designing optical mirrors and lenses weren’t up to the task. Before Shi and his colleagues could design the optics they needed, they had to write software that could handle the precision of the designs.

Why so precise? One of the goals of the APS Upgrade is to focus the X-ray beams down to as small as 5 nanometers – a human hair is about 100,000 nanometers wide – to provide extraordinary resolution for X-ray imaging. To get there, the mirrors must be polished down to an exacting degree.

“The mirrors are the most demanding state of the art in the world, even more than those designed for astronomy,” Shi said. “We can’t make them, so we need to purchase them. There are only a couple places in the world that can make them. This isn’t just polishing; this is removing atoms one at a time from the surface.”

The APS Upgrade project will need 58 of these mirrors, and more than 1,700 compound refractive lenses. Some have been purchased and delivered, Shi said, but many more are in production. They each have to be measured with advanced optical metrology, and ultimately with X-ray beams – beamline 1-BM is reserved for optics testing. As Shi explains it, some of the mechanisms to test optics at this level of precision did not exist. They had to invent those as well.

Shi notes that such a complicated effort must be undertaken by a team, and the one assembled for the APS Upgrade is dedicated and skilled. Each beamline group has engineers, scientists, and procurement specialists, and Shi works with them all on a regular basis.

“None of us can do the job ourselves,” he said. “We rely on teamwork to coordinate.”

In his off time, Shi can be found hanging out with his family (his wife Luxi Li also works at the APS), though he does admit to working some in his off hours. He chalks this up to excitement: with each month that goes by, the APS Upgrade moves closer to its year-long installation period (now scheduled to begin in April 2023), and the optics system he helped design moves closer to facilitating breakthrough science at the beamlines.

“I cannot wait until we have beam,” he said. “I’m already thinking ahead to it. I’m really happy to be working on this project.”