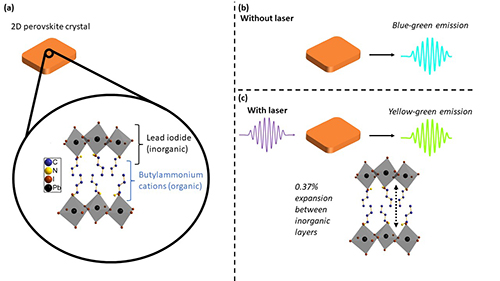 Hybrid organic-inorganic perovskites show exceptional promise for use in multiple optoelectronic applications. These compounds are called hybrid because they consist of alternating organic and inorganic layers. The organic layers contain carbon-nitrogen chains, while the inorganic layers combine a halogen (bromine, iodine, chlorine, etc.) with a metal to form an octahedral structure. This study investigated changes in different thin-film perovskites with alternating organic and inorganic layers. One of the thin (two-dimensional, 2-D) films contained an inorganic perovskite layer of iodine (I) and lead (Pb), interfaced with an organic butylammonium layer, or (BA)2PbI4 for short (Fig. 1a). A similar thin film, (PEA)2PbI4, featured an organic phenethylammonium layer. Transient X-ray diffraction (TrXRD), performed at the U.S. Department of Energy’s Advanced Photon Source (APS), probed rapid structural changes in both films following exposure to laser light. The experiments revealed a significant lengthening of the film along one axis due to expansion of the organic layer. Furthermore, it was found that the color of light emitted from the perovskite (inorganic) layer was shifted following laser excitation. These dramatic results, published in the journal Advanced Materials, provide important new insights into the dynamic behavior of these materials, which are being developed for advanced sensors, light-emitting diodes, and photovoltaic devices.

Compounds with a perovskite structure often exhibit unusual electronic, optical, and magnetic properties. Perovskites consist of layers of repeating octahedral (eight-sided) units that form little diamond-like shapes. For the lead iodide perovskites utilized in this study, the octahedra had iodine atoms at the six vertices surrounding a single lead atom at the center (Fig. 1a).

The 2-D films created for this research consisted of a relatively rigid perovskite layer interfaced with a pliable organic layer. When these hybrid films are stimulated by exposure to light (photoexcited), the dynamic response of the film, such as changes in electrical activity, could theoretically arise from any number of factors associated with such a complex system. Determining the full array of thin-film changes that occurred in response to photoexcitation, as well as the factors driving those changes, presented a challenging task.

Transient X-ray diffraction allows scientists to probe structural changes on picosecond timescales (one-trillionth of a second). The thin films examined in this research were first exposed to a laser pulse, then immediately probed by TrXRD experiments utilizing high-energy synchrotron X-rays at the X-ray Science Division Time Resolved Research Group’s beamline 11-ID-D of the APS, a Department of Energy Office of Science user facility at Argonne National Laboratory. The TrXRD data revealed subtle expansions in both thin films. The largest expansion was 0.37% along one crystallographic direction in the (BA)2PbI4 hybrid film (vertical arrow in Fig. 1c). The (PEA)2PbI4 film experienced a similar expansion that was about 200 picoseconds faster due to the film's higher rigidity than the (BA)2PbI4 film.

The exact cause of these structural changes was investigated. A laser pulse can heat a thin film and produce structural distortions. However, calculations indicated that the laser's energy would raise the temperature of the two films by around two degrees Celsius (2° C), which is far too little to account for the observed lattice expansions.

Instead, the researchers concluded that the observed lattice dynamics arose from electronic changes induced by the laser pulse. When exposed to a laser, electrons are excited to higher-energy states, leaving positively charged holes behind in a low-energy state (holes are electron-deficient regions in the lattice that can move around somewhat like electrons). This laser-induced excitation also caused bonds to break and regions of the polar lattice to strain around populations of negatively charged electrons and positively charged holes, which in turn caused the organic layers to expand.

Another surprising effect of laser excitation was traced to a 5° increase in the bond angles formed by the lead and iodine atoms. The chemical bond changes, which occurred within a nanosecond after the laser pulse, distorted the lead-iodide octahedra within the rigid perovskite layer and shifted the color of the light emitted by the thin film. Figure 1 illustrates this change in color of light emitted by the (BA)2PbI4 film following exposure to a laser pulse.

Both the emission color change and structural expansion of the thin films were surprising experimental results. These new insights into the properties of hybrid organic-inorganic thin films should aid scientists attempting to commercialize these remarkable optoelectronic materials. Such hybrid thin films are the subject of intense research due to the high efficiencies achieved in laboratory-produced solar cells and light-emitting diodes. Moreover, these films should be easy and inexpensive to mass produce, with characteristics that are highly tunable, meaning their properties can be tailored for different applications.

It is well known that the structure within a perovskite film is quite heterogeneous with micro- and nano-size domain structures and boundaries. The extremely high brightness of the APS Upgrade beam will enable the study of ultrafast heterogeneous dynamics in perovskite materials, providing new insight in material designs.  ― Philip Koth

Work performed at the Center for Nanoscale Materials and Advanced Photon Source, both U.S. Department of Energy (DOE) Office of Science user facilities, was supported by the U.S. DOE Office of Sciences-Basic Energy Sciences, under Contract No. DE-AC02-06CH11357. At Northwestern University, this work is supported by the U.S. DOE Office of Science-Basic Energy Sciences, under Grant No. SC0012541 (M.G.K., synthesis, structure, and characterization of physical properties) and by the National Science Foundation (NSF) Macromolecular, Supramolecular, and Nanochemistry Award No.1808590 for elevated fluence optical investigation. This work made use of the IMSERC facility at Northwestern University, which has received support from the Soft and Hybrid Nanotechnology Experimental (SHyNE) Resource (NSF ECCS- 2025633), and Northwestern University. Purchase of the Ag-microsource diffractometer used to obtain results included in this publication was supported by the Major Research Instrumentation Program from the NSF under the Award No. CHE-1920248. This material is based upon work supported by the NSF Graduate Research Fellowship Program under Grant No. DGE-1842165 (S.P. and A.B.). A.M.L. acknowledges support from by the U.S. DOE Office of Science-Basic Energy Sciences, Materials Sciences and Engineering Division, under Contract DE-AC02-76SF00515. This work was performed with financial support from the European Union's Horizon 2020 program through an Innovation Action under grant Agreement No. 861985 (PEROCUBE). J.E. acknowledges financial support from the Institute Universitaire de France. This work was granted access to the HPC resources of [TGCC/CINES/IDRIS] under the allocations 2020-A0100911434 and 2020-A0090907682 made by GENCI.