Increasing the Efficiency of Carbon Conversion 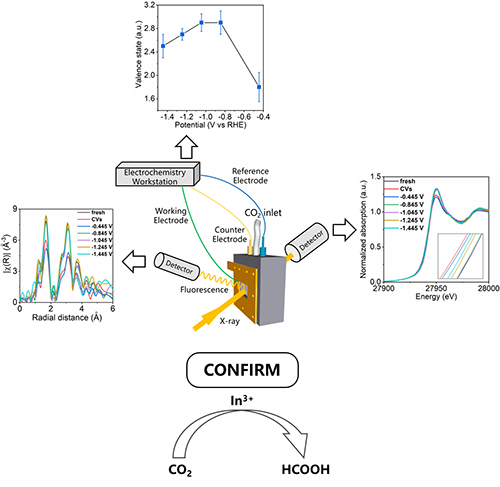 One method of combating climate change would be to capture carbon emissions at the source and convert them into some other material, preferably one with some economic value. Carbon dioxide, for instance, can be chemically reduced to formic acid, which in turn can be used in a variety of applications, from improving livestock feed to storing hydrogen for fuel cells. A group of researchers, using the U.S. Department of Energy’s Advanced Photon Source (APS) at Argonne National Laboratory, have shown how a particular catalyst can help the conversion process along. Their research results were published in the journal Nano-Micro Letters.

Electrocatalysis powers a carbon dioxide reduction reaction by exposing the gas to a catalyst—often based on indium, bismuth, or tin—in the presence of a voltage. Indium-based catalysts have been shown to reach Faradaic efficiencies (the efficiency with which charge [electrons] is transferred in a system facilitating an electrochemical reaction) of 95% in formic acid production, but their conductivity is limited, so they require higher applied voltages. They also tend to have short lifetimes at high current densities, limiting their practical application. The goal is to achieve high efficiencies at low voltages and high current densities.

A group of researchers built a catalyst in the form of a nanocorn to improve conductivity. Their nanocorn, derived from a metal-organic framework, consists of a carbon nanorod, which acts as the “cob,” covered in a uniform array of indium nanocubes. The nanocubes provide the active sites for the reduction reaction to take place, converting the carbon dioxide into formic acid.

The researchers synthesized an indium (In3+) powder and used a metal-organic framework to create the corn-like nanostructure. They found that with a current density of 100 mA cm2, the system remained stable for more than 120 hours, with efficiency above 90%. Existing catalysts do not last nearly that long at current densities above that level. They achieved efficiency of 84% at a lower voltage, which they said was still an excellent result, and efficiency of 98% at a higher current density of 320 mA cm2.

The team performed a variety of x-ray studies at the APS X-ray Science Division (XSD) Spectroscopy Group’s 20-BM x-ray beamline at the APS, and at the XSD Chemical & Materials Science Group’s 12-BM-B beamline also at the APS, a Department of Energy Office of Science user facility at Argonne National Laboratory.

With that information in hand, they went back to the laboratory and optimized the catalyst and the parameters of the reaction. They then took their new samples to beamline 12-BM-B, where they performed in situ XAS while feeding carbon to the catalyst in an effort to understand the reaction mechanism (Fig. 1). The set-up allowed them to test the material at different catalytic potentials. They found that at negative potentials, the In3+ was reduced to indium, but then when the reaction turned carbon dioxide into formic acid, the reduced indium is re-oxidized back to In3+.

The researchers say their studies showed that it is the In3+, and not the reduced indium, that is the active site for formic acid production.

The researchers will next look for ways to increase the stability of their catalyst, so that reactions can be run for a longer time at higher efficiencies. Their aim is to develop a material that can operate for more than 1000 hours under current densities above 500 mA cm2.  ― Neil Savage