Between a Rock and Water Interface 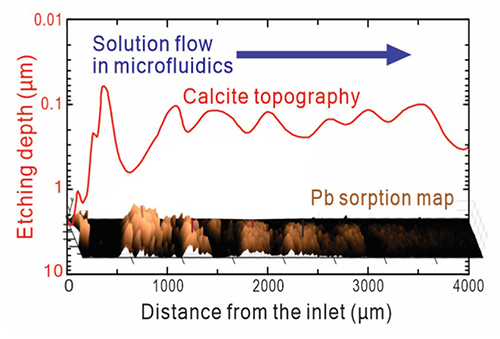 Life is often celebrated for its self-assembling complexity, yet humble rocks are also hiding intriguing patterns and emergent behavior that deserve appreciation and scientific exploration, and not just for the sake of curiosity. Carbonate rocks, such as limestone and marble that are composed mostly of a calcium carbonate mineral calcite, buffer the waters of Earth, and also have a role to play in hydrocarbon storage and carbon dioxide sequestration, one of the great challenges of our times. But to even begin to understand how these rocks might combat climate change, geochemists must know how chemical and physical conditions impact carbonate rock porosity and permeability. To explore how the rate of a fluid passing over a carbonate rock influences emergent behavior, researchers combined a microfluidic channel along with micro x-ray fluorescence and diffraction measurements collected at the U.S. Department of Energy’s Advanced Photon Source (APS) and published their results in the journal ACS Earth and Space Chemistry. These and other experiments are helping to explain how minerals in a rock matrix self-organize and may have practical implications for toxic heavy metal remediation and carbon capture.

Rocks are altered through their interactions with fluids, which may carry substances that react with embedded minerals or physically impact rock structure. Though many experiments have looked into rock behavior in stationary aqueous solutions, these experiments ignore the role of fluid flow that can drive the emergent behavior observed in rocks in the real world. These natural interactions are directional and the rate at which fluids pass by or through the rock can vary over time. Using a microfluidic cell enables fine control over fluid flow rate as it passes by a calcite surface, offering a closer approximation to conditions that shape rock in nature.

In this study, the researchers wanted to explore a scenario with real-world consequences. Calcitic limestone is commonly used around metallic sulfide mining operations to help neutralize acidic drainage, which often contains lead. Dissolved lead can react with calcite to create a range of other minerals that can trap the lead ions, safely sequestering the toxic metal. That's why the researchers chose to study how a low-pH (3.5) solution with 5mM lead concentration affected the surface of a calcite crystal. They cleaved calcite crystals, one per experiment, with a razor blade to create fresh cross-sectional surfaces of about 1-cm2. They clamped together the calcite crystal's freshly cleaved face against the polydimethylsiloxane microfluidic cell, with only a small channel between the surfaces. The researchers tested flow rates between 0.5 nanoliter per minute and 2250 nanoliters per minute against the calcite surfaces using a fixed solution volume of 300 microliters. After each microfluidic session, the researchers subjected the crystal surfaces to a series of imaging studies using high-resolution analytical tools, including scanning atomic force, digital holographic, and electron microscopies as well as micro x-ray fluorescence maps at the GeoSoilEnviroCARS (GSECARS) 13-ID-E beamline at the APS, and x-ray diffraction scans in a specular x-ray reflectivity geometry at GSECARS beamline 13-ID-C, also at the APS (the APS is a Department of Energy Office of Science user facility at Argonne National Laboratory).

Together, the data demonstrated the emergence of flow-rate-dependent reaction patterns. At flow velocities greater than 926 micrometers per second, the researchers observed that lead started to sorb into the calcite surface with a banding topography. The location of the lead-rich bands correlated with calcite dissolution, with the distance between bands becoming smaller at slower flow rates.

The bands also related to the development of micropyramidal structures on the surface of the calcite crystal. At flow rates of 278 micrometers per second or less, the researchers observed deposition of lead-carbonate minerals hydrocerussite and cerussite. These minerals are the result of reactions that occurred between calcite and lead and created roughness on the crystal surface.

The findings indicate that there is a complex interplay between surface reactions, topography, and solute transport velocity at the mineral-fluid interface.

In more immediate terms, the findings suggest strategies for increasing lead uptake by calcitic limestone for passive remediation of lead in acidic mine drainage. Further afield, the general approach of using microfluidic apparatus and high-resolution surface analytical tools for the study of mineral surfaces under different conditions could bring about a new understanding of emergent behavior in geochemical systems.  ― Erika Gebel Berg