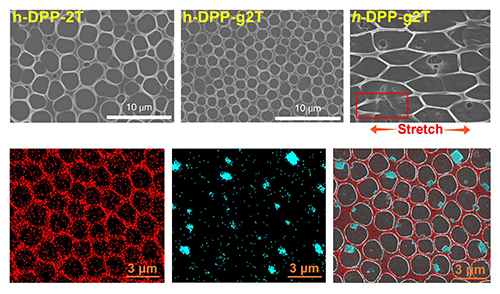 Scientists have succeeded in fabricating organic transistors that can be stretched to over twice their original length for thousands of cycles without degrading their performance. The advance will accelerate the development of wearable or implantable biosensors to promote human health, because these transistors are also electrochemically sensitive, capable of interacting with the electrolytes within the human body. The scientists combined two approaches to achieve this feat, synthesizing a polymer with superior properties and depositing it in a honeycomb porous structure to make it both more stretchable and more durable. Complementary imaging techniques were used to analyze the structure and durability of several experimental thin-film organic electrochemical transistor (OECT) systems created for this study, including atomic force microscopy (AFM) and scanning electron microscopy (SEM). Molecular spacing and crystallinity data were determined using gazing-incidence wide-angle x-ray scattering (GIWAXS), carried out at the U.S. Department of Energy’s Advanced Photon Source (APS). The experimental results, published in the journal Nature Materials, revealed that the test material h-DPP-g2T exhibited outstanding performance, delivering stable current output even when stretched 140% from the relaxed state. This new, highly durable material represents a major advance towards the practical use of OECT materials in many biomedical and sensor applications, as well as for other applications such as soft robotics.

An OECT is a kind of thin-film transistor (TFT), a design widely used in standard backplane circuits. TFTs use a voltage input, called the gate voltage, to control their output of electrical current. Although based on the TFT design, OECTs are unique because they conduct both electronic and ionic currents. This allows them to interface with an electrolyte, so that the ions within the electrolyte affect the current flow through the TFT.

Bodily fluids like sweat and plasma are natural electrolytes. OECTs utilize the body's electrolytes to detect, measure, and relay various physiological processes. OECTs can efficiently accomplish these tasks because they function as transducers and amplifiers: the analog input from a very few ions is converted into a strong, clean (low-noise) digital signal. Researchers at multiple institutions are developing OECT technologies to measure diverse cell and bodily functions. For example, an OECT sensor affixed to the skin, or implanted subcutaneously (just under the skin), could monitor electrolyte imbalances. Tiny OECT devices might also detect and monitor epileptic episodes in the brain via placement just beneath the skull, on the brain's surface. In another application, OECTs could monitor cellular growth and functionality without altering their behavior.

While the outstanding properties of OECTs make them very appealing, they often crack from the repetitive stretching encountered from placement on or within the body; these cracks can distort the OECTs electrical signals and yield misleading data. Although various fabrication strategies have been employed to address these issues, they have generally fallen short.

The researchers in this study set out to develop a reliable and robust OECT platform. They chose a semiconducting polymer with outstanding ion transport capabilities and excellent electrochemical stability. The polymer's rather daunting label is poly(2,5-bis(2-octyldodecyl)-3,6-di(thiophen-2-yl)-2,5-diketo-pyrrolopyrrole-alt-2,5-bis(3-triethyleneglycoloxy-thiophen-2-yl), abbreviated DPP-g2T. The related polymer DPP-2T was also tested. The two compounds are identical except that DPP-g2T has two glycol side chains, as indicated by the “g”.

A multi-step process was used to fabricate the experimental OECT films. First an elastic substrate was stretched biaxially (in both width and length) and then two gold electrodes were attached. A special fabrication protocol transformed the OECT compounds into honeycomb-patterned films, designated h-DPP-g2T and h-DPP-2T to indicate their honeycomb structures (top row, Fig. 1). The honeycomb pattern allowed the films to resist cracking and promoted ion exchange. Both the h-DPP-g2T and h-DPP-2T films were then affixed to the stretched substrates, and the tension released to achieve the final OECT/substrate product.

The DPP-g2T/DPP-2T compounds were also fashioned into dense films with no honeycomb structure. All the fabricated OECT films were mechanically and electrically tested. The OECTs based on the dense films were permanently degraded when stretched 30% beyond the relaxed state. In contrast the best-performing honeycomb film, h-DPP-g2T, retained good structural condition even after repeated stretching to 120%, with stable electrical performance up to 140% stretch. The superiority of h-DPP-g2T versus h-DPP-2T can largely be ascribed to the former's lower crystallinity and looser structural packing, as revealed by the GIWAXS x-ray measurements carried out at the APS X-ray Science Division Dynamics & Structure Group’s 8-ID-E x-ray beamline at the APS, an Office of Science user facility at Argonne National Laboratory.

In a real-world test, an electrocardiogram (ECG) of a human subject using the h-DPP-g2T film system showed remarkably stable data output, whether subjected to zero, 30%, or 60% stretch. Finally, the researchers note that further refinement of their OECT film/substrate system is expected with improved substrates, more stretchable electrodes, and/or adjustments to their chemical composition.

The higher brilliance of APS-U will make it easier to observe the structural changes OECT materials undergo during operation and will enable studies of their dynamics. The insights gained will help with the optimization of this technology and accelerate progress toward applications.  ― Philip Koth

The authors thank Air Force Office of Scientific Research (AFOSR) (FA9550-18-1-0320), the Northwestern University Materials Research Science and Engineering Center (NU-MRSEC) (NSF DMR-1720139), and Flexterra Corporation for support of this research. This work made use of the J. B. Cohen X-Ray Diffraction Facility; the Electron Probe Instrumentation Center (EPIC) facility, Keck-II facility, the Scanned Probe Imaging and Development (SPID) facility, and Northwestern University Micro/Nano Fabrication Facility (NUFAB) of the Northwestern University’s Atomic and Nanoscale Characterization Experimental Center (NUANCE) at Northwestern University, which received support from the Soft and Hybrid Nanotechnology Experimental (SHyNE) Resource (NSF NNCI-1542205); the MRSEC programme (NSF DMR-1121262); the International Institute for Nanotechnology; the Keck Foundation; and the State of Illinois through the International Institute for Nanotechnology. We also acknowledge the support from the National Natural Science Foundation of China (grant nos. 61804073, 12072057, U1830207), Dalian Outstanding Young Talents in Science and Technology (grant no. 2021RJ06), LiaoNing Revitalization Talents Program (grant no. XLYC2007196), the Fundamental Research Funds for the Central Universities (grant no. DUT20RC(3)032), City University of Hong Kong (grants nos. 9610423, 9667199), the Research Grants Council of the Hong Kong Special Administrative Region (grant no. 21210820), the Intelligence Community Postdoctoral Research Fellowship Program, and Guangdong Provincial Key Laboratory Program (2021B1212040001) from the Department of Science and Technology of Guangdong Province. This research used resources of the Advanced Photon Source, a U.S. DOE Office of Science User Facility operated for the DOE Office of Science by Argonne National Laboratory under Contract No. DE-AC02-06CH11357.