It Pays to Break the Rules When Synthesizing Intermetallic Nanoparticles 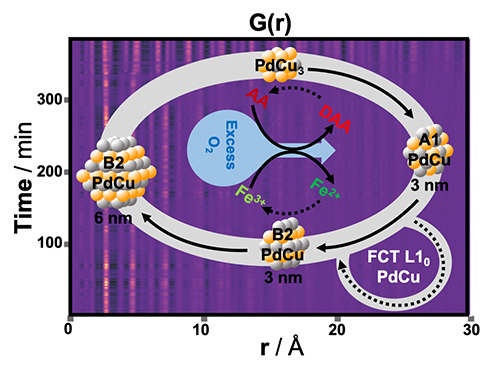 Bimetallic intermetallic nanoparticles (NPs) are receiving increased attention because of their proven ability to selectively tune and optimize catalytic processes. How the formation of such NPs can be controlled, however, remains a topic of much debate. An international group of scientists recently advanced this area of research by showing that careful selection of the additives present during NP synthesis enables the creation of intermetallic PdCu NPs that are uniform in size and shape. They then went on to examine the formation process moment-by-moment using in situ x-ray total scattering and pair distribution function analysis. In this way, they discovered a hitherto unknown formation pathway by identifying more intermediate structures than previously seen. By capitalizing on the insights gleaned from this study, carried out at two x-ray light sources including the U.S. Department of Energy’s Advanced Photon Source, the researchers hope to develop new design principles leading to an expanded library of intermetallic NPs. The research was published in the journal small methods.

The researchers mixed palladium (Pd) and copper (Cu) metal ion acetylacetonate precursors with various amounts of oleylamine (OLA), iron(III) chloride (FeCl3), and ascorbic acid (AA) in a systematic study of the effect of FeCl3 and AA on the final structure, size, and shape of the PdCu nanoparticles. They found that nearly pristine quasispherical intermetallic PdCu NPs averaging 17 nanometers in diameter were produced when all three ingredients were present. In this additive-directed synthesis process, AA increased the reduction rates of the metal ion species, while FeCl3 contributed two chemical species, Fe+3 and Cl-, which facilitated ligand exchange and oxidative etching.

The in situ x-ray total scattering and pair distribution function analyses yielded new structural insights in the disorder-order transformation from a precursor solution complex to disordered alloy NPs, to ordered PdCu intermetallic NPs. It was found that upon reduction of the precursor solution complex, a Cu-rich phase (PdCu3) initially nucleated in the presence of the early PdCu precursor structure (Fig. 1). Continuing the reduction of the precursor led to the formation of a disordered face-centered cubic (fcc) alloy as more Pd0 became incorporated into the Cu-rich structure. With further heating, metallic Pd and Cu became more ordered in the structure in the presence of a face-centered tetragonal (fct) phase that was not previously observed in the disorder-order PdCu transformation. The structure became increasingly ordered with continued heating with a final conversion into the ordered intermetallic phase characterized as a martensitic-like phase transformation in which interatomic positions changed without diffusion taking place.

These results led the researchers to hypothesize that the formation of intermetallic PdCu NPs follows a self-seeded, seed-mediated growth and diffusion mechanism in the initial stages of NP formation with a subsequent diffusion-less martensitic-like transformation that converts the tetragonal fct phase into the final intermetallic cesium chloride-like PdCu structure. Contrary to what is normally proposed as determining alloy formation, the researchers directly observed that coreduction of the metal ions at the same rate is not essential to forming stoichiometric intermetallic PdCu NPs. This observation challenges the general design criteria of intermetallic NPs whereby only metal ion species with similar reduction potentials are believed to form stoichiometric bimetallic NPs. Instead, the researchers found that the local chemistry determined the intermetallic NP formation by modifying growth and reduction of the metal ion species through Cl– coordination at different stages in the formation pathway.

The authors are grateful to the Villum Foundation for financial support through a Villum Young Investigator grant (VKR00015416). The authors acknowledge support from the Danish Ministry of Higher Education and Science (Structure of Materials in Real Time [SMART] grant) and the Danish National Research Foundation Center for High Entropy Alloy Catalysis (DNRF 149). E.D.B. acknowledges funding from the Carlsberg Foundation (Grant CF18-0705). M.S.T. thanks the Villum Foundation (Grant 14922) for support. The Danish Research Council is acknowledged for covering travel expenses in relation to the synchrotron experiment (DanScatt). The authors acknowledge the staff of beamline 11-ID-B at the APS and I15-1 at the Diamond Light Source for experimental assistance. This work was carried out with the support of the Diamond Light Source, instrument I15-1 (proposal EE20187). This research used resources of the Advanced Photon Source, a U.S. Department of Energy (DOE) Office of Science user facility operated for the DOE Office of Science by Argonne National Laboratory under Contract No. DE-AC02-06CH11357.