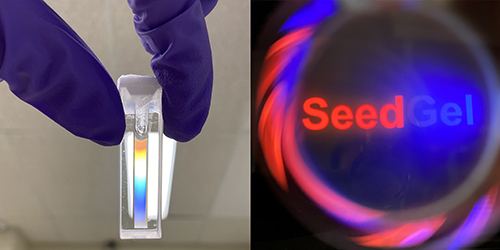 Often, materials that transmit particular colors of light do so because of the periodic arrangement of their crystal structure. Researchers using the U.S. Department of Energy’s Advanced Photon Source (APS) have shown a new method of controlling color, using a temperature-sensitive gel that is not crystalline. The material might lead to new types of color filters, sensors, and displays, as well as to smart windows that block or transmit different wavelengths of light. Their results were published in the journal Nature Communications.

The researchers named the material “SeedGel.” One example of SeedGel consists of silica nanoparticles in a solvent made of 2,6-lutidine and water. Below 26° C, the material is a transparent liquid dispersion, but when it reaches that temperature, it solidifies into a gel. At that point it forms a bicontinuous structure in which the nanoparticles clump together into particle domains, separated from each other by about three micrometers by particle-free solvent domains. Solvent remaining in the particle domains is mainly water, due to the hydrophilic surface of the particles. Lutidine is enriched in the solvent domain.

Depending on the temperature, the optical behavior of the material changes (Fig. 1). When white light is shined on the gel, it scatters different colors—blue at 28.5° C, transitioning to yellow at 27.5° C. Above 29.7° C or below 26.9° C, the gel becomes opaque. In transmission, the effects are complementary to the scattering. With a blue and a red light on one side of the gel, the material passes red light at the higher temperatures and blue light at the lower temperatures.  Though the changes take place over a few tenths of a degree, the researchers say different formulations of the solvent can extend the temperature range. Transmission can be tuned not just across the visible spectrum, but also at ultraviolet wavelengths down to 327 nanometers and at near infrared wavelengths up to 2500 nanometers.

The researchers say the change happens because an increase in temperature causes the concentration of lutidine to decrease in the particle domain and increase in the solvent domain, altering the refractive index of both. They say that this is not a case of luminescence, because the gel is not absorbing or emitting energy from the light; the phenomenon is completely dependent on scattering.

To verify that the gel does not become a crystal, the team performed small-angle x-ray scattering (SAXS) and wide-angle x-ray scattering (WAXS) experiments at the APS X-ray Science Division Chemical & Materials Science Group’s ultra-small-angle x-ray scattering (USAXS) beamline 9-ID-B, C at APS, an Office of Science use facility at Argonne National Laboratory. The WAXS measurements showed that over the temperature range used, the solvent domain did not crystallize. The SAXS measurements showed the same for the particle domain. The USAXS instrument is now being upgraded as a part of APS-upgrade project and will deliver higher resolution data at faster speed when APS re-starts operation in 2024 summer. The team also performed small-angle neutron scattering (SANS) and ultra-small-angle neutron scattering (USANS) at the National Institute of Standards and Technology’s Center for Neutron Research. Different but complementary data from the x-ray and neutron scattering experiments confirmed that it was changes in solvent concentration, and not crystallization, that was responsible for the effect.

The behavior of the gel is known as the Christiansen effect, which allows light of a particular wavelength to pass through a sample only if the refractive indexes of the two domains match. For instance, in the SeedGel, the refractive index of the particle domain and the solvent domain match at a wavelength of about 400 nanometers at the lower temperature, making the gel transparent to blue light. The wavelengths at which the indexes match change as the temperature rises. Filters based on the Christensen effect exist, but the researchers say their material relies on a different approach, which can be more easily customized over a wider range than existing materials.  ― Neil Savage

The authors acknowledge partial funding from Cooperative Agreement Nos. 70NANB12H239 and 70NANB10H256 of the National Institute of Standards and Technology (NIST), the U.S. Department of Commerce. Access to USANS and NGB30mSANS was provided by the Center for High-Resolution Neutron Scattering, a partnership between the National Institute of Standards and Technology and the National Science Foundation (NSF) under Agreement No. DMR-2010792. This work benefited from the use of the SasView application, originally developed under NSF Award DMR 0520547. SasView also contains code developed with funding from the EU Horizon 2020 program under the SINE2020 project Grant No. 654000. This research used resources of the Advanced Photon Source, a U.S. Department of Energy (DOE) Office of Science User Facility operated for the DOE Office of Science by Argonne National Laboratory under contract DE-AC02-06CH11357.