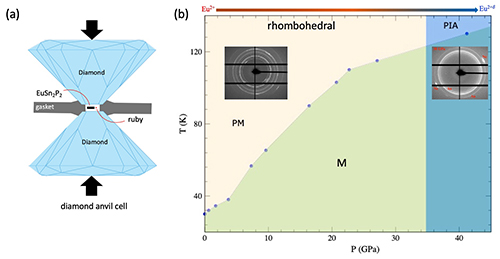 In a set of recent experiments, an international team of scientists has shown that pressure can be used to elevate the magnetic ordering temperature of a novel magnetic topological insulator. The researchers say their findings improve our understanding of these quantum materials, making it easier for us to unlock their potential for future quantum technologies. The results, based on research at the U.S. Department of Energy’s Advanced Photon Source (APS) were published in the journal npj Quantum Materials.

Topological materials sit at the frontier of materials research due to their potential applications in future quantum technologies. In mathematics, topology describes properties of objects, or shapes, that do not change during continuous deformations. A classic example is the idea that a mug and a donut are the same, if defined by the existence of a single hole. Topological materials were first described less than 20 years ago. In essence, they are materials with electronic properties that do not change if they are deformed as long as their topological state remains the same.

The electronic properties of topological materials are quantum in nature and cannot be explained by standard theories based around electronic band structure. Instead, they require an understanding of quantum mechanics.

A class of topological materials known as magnetic topological insulators are of particular interest due to their potential applications in spintronic devices. Spintronics makes use of the different spin states of electrons in atoms to process and store information. It has the potential to deliver devices that are smaller and more energy efficient than conventional electronics. As these spin states are quantum-mechanical in nature they could also be utilized in quantum computers.

Very recently, EuSn2P2 has garnered interest as a topological material. It consists of strongly magnetic europium layers sandwiched between layers of tin and phosphorus. But EuSn2P2 only becomes a magnetic topological system at temperatures below 30 K (around -240° C or -400° F). At these temperatures, the material becomes magnetically ordered and its magnetic behavior can be controlled by an external magnetic field.

To make EuSn2P2 more useful, scientists have been working to raise its magnetic ordering temperature. The most common approach has been chemical doping. Researchers subtly change the chemical make-up of the material in the hope that this will change its structure and magnetic behavior.

Physicists, chemists, and materials scientists in the U.S. and Taiwan decided to see if pressure could be used to increase the magnetic ordering temperature of EuSn2P2. The team placed EuSn2P2 under pressures of up to 62 gigapascals (GPa) and used three beamlines at the APS, a U.S. Department of Energy Office of Science user facility at Argonne National Laboratory to study the effects on the materials crystal structure, magnetic order, and electronic properties.

The researchers found that at a pressure of 36 GPa, EuSn2P2 changed from a crystal with a rhombohedral structure to an amorphous phase; that is, a non-ordered or non-crystal structure. They also found that there was a fourfold increase in the material’s magnetic ordering temperature. The high pressure changed the magnetic ordering temperature from 30 K to 130 K. This means that the material enters a magnetic state where its topological state can be better controlled at a much higher temperature.

According to the researchers, their work shows that pressure can be used to tune magnetic behavior in magnetic topological insulators and could potentially be used to realize novel quantum behaviors.  ― Michael Allen

This work is supported by the National Science Foundation (NSF) through Grant No. OIA- 2033131. T.C. acknowledges the support provided by the National Aeronautics and Space Administration (NASA)-Alabama Space Grant Consortium, Research Experiences for Undergraduates (REU) award to University of Alabama at Birmingham. Z.N. acknowledges the support from the Department of Education-Graduate Assistantship in Areas of National Need (GAANN) Grant No. P200A180001. W.X. is supported by the U.S. Department of Energy (DOE) under the contract of DE-SC0022156. HPCAT-XSD operations are supported by the DOE-National Nuclear Security Adiminstration’s Office of Experimental Sciences. B.L., the COMPRES-GSECARS gas loading system, and the PX2 program are supported by COMPRES under NSF Cooperative Agreement EAR- 1606856. We are grateful to S. Tkachev for help with the gas loading of the DACs at the APS. This research used resources of the Advanced Photon Source, a U.S. DOE Office of Science User Facility operated for the DOE Office of Science by Argonne National Laboratory under Contract No. DE-AC02-06CH11357.